Webinar highlights plight of women on farms, calls on President to honour promise 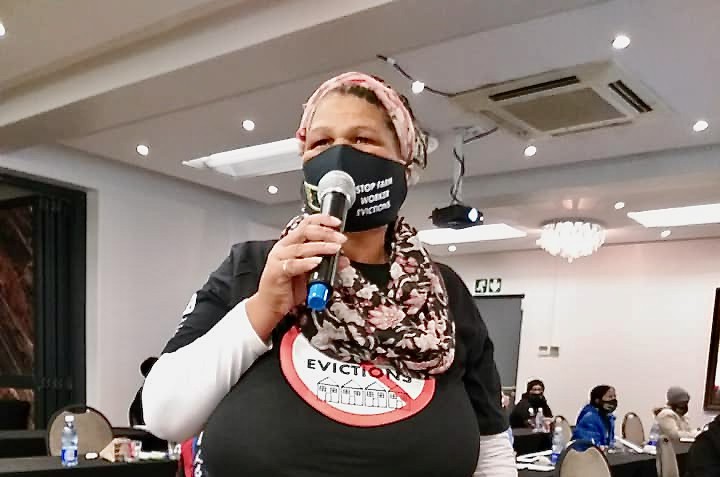 Johanna Fransman was evicted from Soetendal farm and relocated to New Rest. She says she lost her son in January this year in a shack fire at New Rest. “I feel very disappointed in the municipality who say that they cannot give us houses. Our children are anxious to be outside, and you cannot even walk outside at night. I don’t want to be where I live,” she said. Photo: Supplied

Members of the Women on Farms Project (WFP) say despite campaigns, talk of stopping evictions on farms and the Covid-19 pandemic, thousands of people face becoming homeless as eviction orders continue to be approved by the courts.

The women raised their concerns at an online webinar on Tuesday, held in partnership with Mawubuye Land Rights Forum, the Social Justice Coalition, and the Legal Resources Centre.

They demanded that President Cyril Ramaphosa sign a moratorium on farm evictions, which they say he promised farmworkers in De Doorns and Paarl in 2014.

The WFP compiled a memorandum with a list of demands to put to the Department of Agriculture, Land reform and Rural Development. These include: the provision of land and decent housing for evicted farmworkers, ensuring that evictions are not granted if there is no land for alternative housing, and that government accelerate Land Expropriation without Compensation.

Director of WFP Colette Solomon said although the country celebrates 26 years of democracy, farmers “still have all the power, all the money and all the wealth”. She said, “Farmworkers, specifically women on farms, are becoming poorer. There are fewer jobs available; people are working for fewer hours; there’s more retrenchments and evictions.”

Co-director Carmen Louw said the evictions of farmworkers is a recurring issue despite the attempts of several organisations and campaigns to stop it.

“In the Drakenstein Municipality, there are more than a thousand cases on the current roll that are awaiting an outcome, and in most cases an eviction order will be granted. So, despite numerous and yearlong fights, many magistrates and land claims courts endorse these eviction orders.”

“We’ve got a supposedly superior Constitution but there’s basically no difference to the life that women in 1956 experienced in urban areas than what women on farms are still experiencing today,” said Louw.

The webinar was joined by several of the women from the Drakenstein area who were evicted from the Soetendal farm in 2015. They shared their experiences of being relocated by Drakenstein Municipality to an open plot in New Rest informal settlement. Diana Meyer of WFP and her family were among them. She said the eviction was a traumatic experience for the community.

“There weren’t proper doors or a proper foundation for the houses. Our things were thrown out and broken, while our children stood watching in confusion,” she said.

Meyers said her family do not feel safe where they now live and their living conditions are worse than when they lived on the farm.

Dawn Jacobs, of Drakenstein Civics, said that some farmers have forced workers to leave by cutting off the supply of water and electricity to their homes.

“We don’t want to stay in shacks or townships. We want to remain on the farms,” she said.

The women also spoke of the violence used by law enforcement and the Red Ants when evicting farm workers, despite a moratorium on all evictions during the Covid-19 pandemic.

Denia Jansen, of Mawubuye Land Rights Movement, said they had held several engagements with the Langeberg municipality regarding police brutality but to no avail.

“There’s no clear answer as to why they are using the Red Ants and law enforcement to evict people during this pandemic,” she said.

“Nothing will change until we stand united and unite our struggles regardless of which organisations we belong to. We all need to campaign for the same thing.”

Next:  The long walk to water in KwaZulu-Natal villages