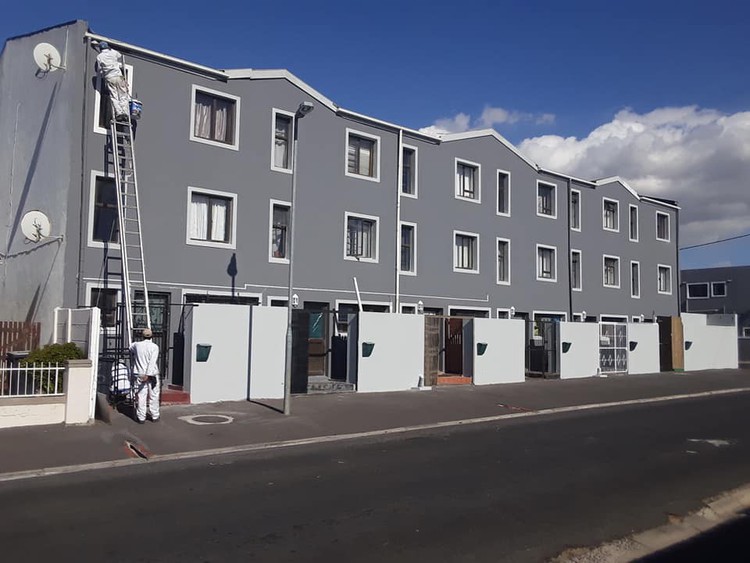 People involved in the refurbishing of Kensington Place hope that their project will inspire other communities to use the skills and services of unemployed people in their area. Photo: Supplied/Joseph Bruintjies

Cape Town residents have taken to social media to praise the body corporate of a well-known housing complex in Kensington for hiring unemployed people from a nearby informal settlement to do their renovations.

The Kensington Place Body Corporate plans to unveil the newly renovated complex on Saturday, 19 December. This is the first time in 20 years that the building has received a facelift. Residents say they decided to use the project as an opportunity to uplift their community and create employment.

The three-week-long upgrades were completed by a team of 13 workers, most of whom were from Die Kamp informal settlement near the complex.

Funding for the project came from savings accumulated over the years, said Joseph Bruintjies, a resident of Kensington Place and the project manager who oversaw the upgrades.

“There are 12 units in the complex and some of our residents are retired, so we have a low living standards measure in terms of income. We only had R350,000 available to do the upgrades and we wanted to make this a viable, low-risk project,” he said.

Had the body corporate decided to hire a contractor, most of the funds would not have gone to the artisans who did the work, said Bruintjies. Instead, he said, they were able to pay each worker R450 a day to promote economic empowerment in the community.

Austin Davids, one of the painters on the project, said he was amazed by how much the team had been able to accomplish just 12 days into the project.

This is despite what Phaldie Daniels called the “challenging condition of the building”. Daniels, the project’s site manager, is an experienced tour guide who has been out of work for seven months, due to the Covid-19 pandemic.

“I appreciate the opportunity to put bread on the table again,” said Daniels.

Once the project has been completed, Bruintjies said, he would like to assist the team to start their own company.

“The lesson for all of us is not to look far … but discover our own people in our own community and empower them economically. We found these exceptional artisans within 600 metres of our complex in an informal settlement,” Bruintjies wrote in a post on the Kensington/Factreton UNITE Facebook page.

Next:  Lottery whistleblower “pressured” to pay IT company to build athletics track