As temperatures in Cape Town topped 33 degrees on Tuesday, Blikkiesdorp residents sweltered in the heat wave, with no escape from the blazing sun.

“It is not nice at all in these shacks,” said Waseema Hendricks, who has lived in Blikkiesdorp for eight years. She said she battled to keep her six month old baby cool.

“My baby is always moody,” said Hendricks, who takes the child to a play park where there are the only trees in the area.

She said residents tried to survive the heat by drinking “lots and lots of ice water” and going to bed late, when it was cooler. But at night they were prey to mosquitoes.

Most of the shacks had a single window which made ventilation difficult, she said, and many residents cut their own windows in another side of the shack.  “The rooms are small. We try by all means to create space,” she said. 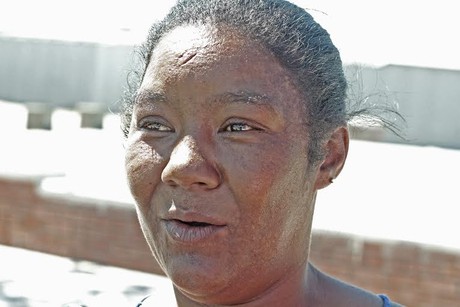 Wassema Hendricks says she battles to keep her baby cool in the heat. Photo by Masixole Feni.

On Tuesday, children in shorts were playing in the streets with water bottles. In the mid-afternoon heat, residents sought what little shade there was against the walls of their shacks.

At the play park, Annie Pluke, who has lived in the community for eight years, complained about her asthma.

“This year the temperatures are so high. It is unbearable,” she said.

“We are still waiting for the government to give us feedback on how long we are to live under such conditions. When we were settled here they told us it was only for six months, but it’s now close to a decade.”

Pluke does not have a refrigerator and drinks water straight from the tap.

“It takes almost five minutes to get cold water, making us waste a lot of the water.”

“It is very hot inside the shacks,” said Luzanne Fredericks, holding her sister’s child. “We cannot stand the heat. Some of the kids cry all night.”

Next:  Lindelani residents have to clean communal toilets

Previous:  Echoes of 1998 in the student protests

Community gardeners dig in against attempts to evict them