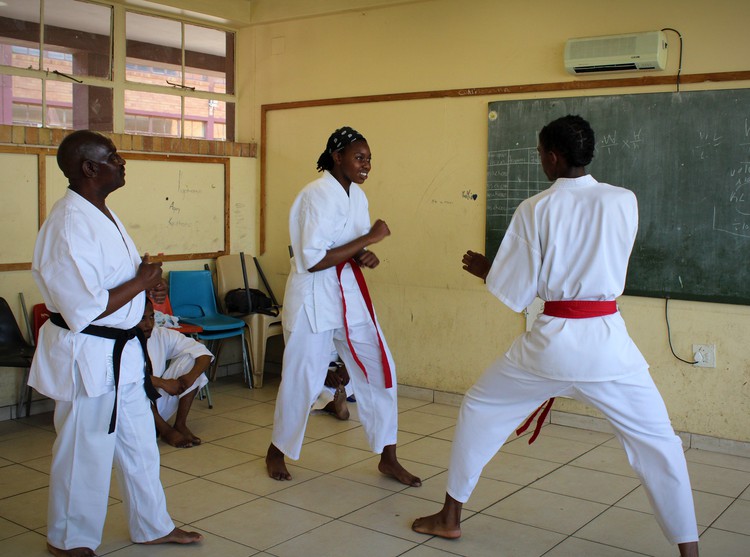 Sensei Mandla Nkonde (wearing a black belt) with students Oratwa Tsosane and Boipelo Mongale. During the week Nkonde works as a reclaimer and at the weekend he becomes sensei to over a dozen children who attend his karate classes in Orlando West, Soweto. Photos: Masego Mafata

The learners are dressed in white Gi’s, each sporting a brightly coloured belt around their waists. Each count is accompanied by a routine of punches, kicks and blocks.

The 58-year-old Sowetan has been teaching Karate since the late 1980s. Before teaching, he was an avid Karateka — a practitioner of Karate — who earned a black belt in the early 1980s, he says. Nkonde runs the Orlando West Karate Development Academy over weekends. The academy is part of the Soweto Dojo Kyokushin.

“Growing up, I always liked Karate. Seeing people like Bruce Lee on TV made me want to learn how to do what they were doing. In 1977, I started learning Karate while living in Ulundi, KwaZulu-Natal,” he says. He also says he participated in national tournaments.

After earning his back belt, Nkonde wanted to make Karate lessons more accessible for people who did not have financial support to advance in the sport.

“I started training children in Newcastle at a Catholic school in the late 1980s. Karate demands discipline and humility, and it teaches you respect. I wanted to instil these values in children,” he says.

Nkonde moved to Gauteng over 30 years ago and started his academy. He currently trains 15 youths between ages five and 19.

In 2000, Nkonde became a reclaimer when he lost his job at a doctor’s surgery. His partner, Manuku Nkopane, is also a reclaimer.

“When you are a reclaimer, some people tend to look down on you. They don’t see this as a job,” he says. “People don’t realise that reclaiming puts food on our table and it pays our rent. The karate academy also benefits when we invest our extra earnings into it,” says Nkopane who is a treasurer at the academy.

Nkonde says one of the academy’s biggest challenges is sourcing a venue. “We use a classroom but often when there is a new principal at the school, we have to find a new school.”

Despite this, Nkonde says he has made sure to find ways to keep training students because there aren’t a variety of sporting options for children in Soweto.

Student Oratwa Tsosane, 15, joined the academy in April this year. “I have always been a fan of karate. When my mom saw sensei Nkonde walking down the street, she asked him how I could get involved. I was instantly welcomed when I started,” she says.

Oratwa, who now has a red belt, says she hopes to use the skills learnt in karate class to teach others. “Karate is not a big sport in Soweto but it could be. It just needs the right support through funding and interest in the sport,” she says. 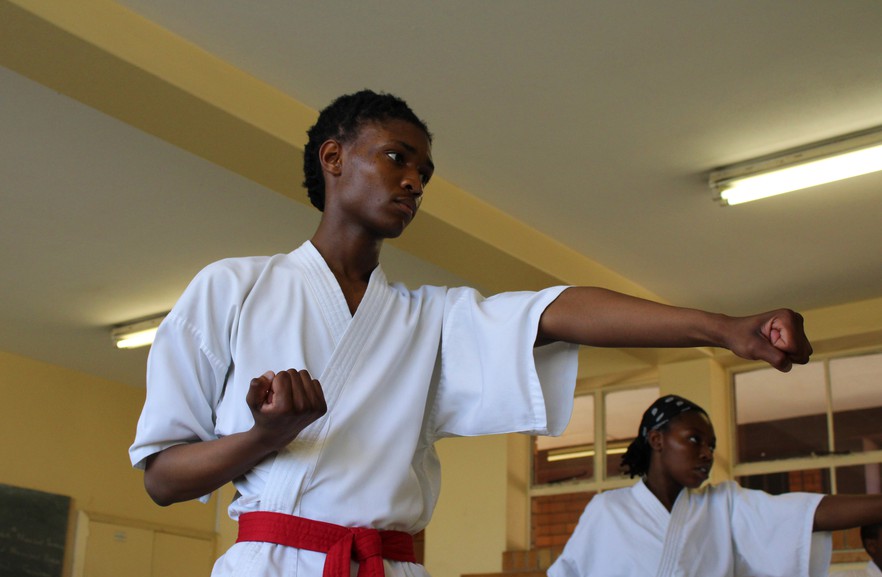 Bayanda Khumalo, 19, has been training with Nkonde for six years. He has a brown belt and is one of the academy’s oldest and experienced members. He says seeing martial arts on television sparked his interest and passion for the sport. “Some of the biggest lessons I have learnt are accountability and perseverance. Karate teaches you that every action has a consequence,” he says.

Nkonde says that his students are often unable to pay entry fees for tournaments. “The academy can’t afford to pay for the students because our only source of income is a small fee that members pay at the beginning of the year. Some members cannot even afford this fee but they are still allowed to come to training,” he says.

The equipment used at the academy was sponsored by African Bank in 2019, says Nkonde. “Before that, we used homemade equipment.”

Nkonde says he hopes to grow the academy and find a permanent venue.

The town of Newcastle was spelt incorrectly in the original.

Next:  Police officers arrested for death in custody of Regan Naidoo

There are snakes, flash floods and no basic services at Marry Me informal settlement