Lawyers for Human Rights to host webinar on Friday 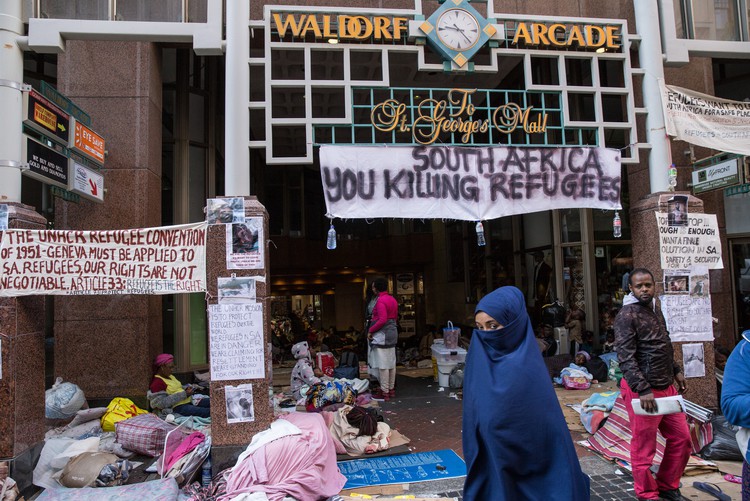 Hundreds of refugees and asylum seekers were camped outside the UNHCR offices in Cape Town for several weeks in October 2019. Archive Photo: Ashraf Hendricks

Amendments to the Refugee Act which came into effect on 1 January increased the probability of asylum seekers and refugees being unlawfully detained and deported. This is according to a report released by Lawyers for Human Rights (LHR) on Tuesday.

The report will officially be launched during an online webinar on Friday where the organisation plans to host discussions on the implementation of alternatives to detention that respect human rights.

LHR said the amendments to the Act were contradictory to some of the recent improvements at the Department of Home Affairs.

According to Government’s website, one of the reasons for the amendments was to include new provisions that disqualify refugee status.

The LHR report stated that one of the new amendments allows for the detention and removal of an asylum seeker or refugee on vague grounds of “threat to national security” or “national interest”. It also prevents refugees and asylum seekers from engaging in “political activity” even if it pertains to their home country.

Another regulation requires that orders made by a High Court to release a detainee must be confirmed by the Constitutional Court within two weeks. If it is not confirmed, the High Court order lapses and the person may be deported.

The regulations now require new asylum seekers to get an asylum transit visa at recognised points of entry, which is largely dependent on the discretion of the immigration officer. This visa would only be valid for five days. The asylum seeker must then report to a Refugee Reception Office (RRO) within those five days and submit the transit visa. Failure to do so will result in exclusion from refugee status, says the report.

LHR said that “nationality days” at reception offices could prevent asylum seekers from submitting their asylum transit visas within five days. “If a Somali newcomer enters the country on a Thursday through a land port of entry, and is provided with the five day asylum transit visa, she would have to wait until the following Thursday before being permitted to enter the RRO, as that is the Somali nationality day,” read the report.

The closure of centres in Cape Town and Johannesburg poses yet another hurdle for asylum seekers. The Cape Town centre was the second busiest in the country. Both centres remain closed to date. Asylum seekers often have to travel long distances to access RROs which is costly.

Next:  Lottery fails to name beneficiaries of multimillion-rand Covid-19 fund