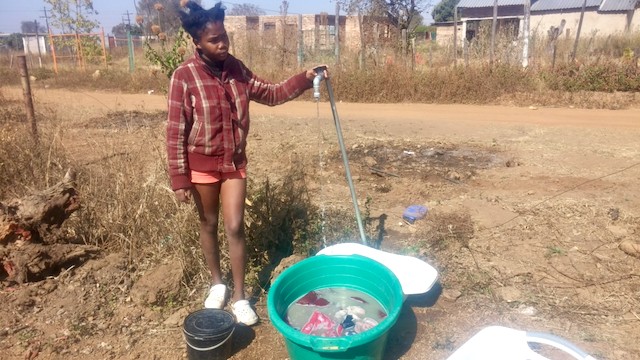 Promise Ngozo, of Itireleng village in Madibeng, said, “We were suffering as residents. Having water back after this long time means a lot to us. Sometimes we spent days without water at home, and we had to walk long distances to get it with wheelbarrows.” Photo: Chris Gilili

After waiting nine months, over 2,000 residents of Itireleng, a village in the North West Province close to the Gauteng border, have water in their taps again.

Standpipes ran dry in October 2021, leaving Itireleng without water. Madibeng Local Municipality’s enormous debt to the City of Tshwane caused the City to reduce the water pressure of its supply to the area.

Villagers had to walk long distances to streams and makeshift wells. Water trucks were scarce and unreliable.

In June we reported that protests had broken out in Hebron, 10km away, where taps had also run dry in October.

“Tshwane has now released the pressure of the water,” he said.

Phaloane said he could now safely say that water is back for good in Itireleng and the other villages that were affected.

He said that the municipality had decided that every household will pay R72 monthly for access to water to avoid a similar situation developing in the future.

“We’re also doing this in response to the Auditor-General’s report, which has cited that our municipality fails to collect revenue. This is one of the major reasons why Madibeng is always under administration,” said Phaloane.

“I was starting to lose any hope that we would have running water again. This is such a huge relief for us,” said resident Nokuthula Tshuma. “Human life depends on water, now we will have a normal life again.”

Next:  Villagers raise R135k to build bridge across deadly river

Previous:  “If they try to evict people, there will be bloodshed” say RDP occupiers