Police fired stun grenades at about 150 protesters in front of the Cape Town Civic Centre on Thursday morning. The picket, led by the Social Justice Coalition (SJC), was for sanitation to be provided to shack settlements on the Cape Flats.

“They shoot at us because they do not know our pain. They don’t even care to understand. To them it’s just a job,” shouted a protester. The protesters had divided themselves into groups and blocked the four entrances to the centre. They demanded to see Mayor Dan Plato.

Many of the protesters came from occupied land across the city: Ses’khona in Philippi East, Nkandla in Kraaifontein, Island in Makhaza Khayelitsha, Green Point in Khayelitsha and KK Section in Khayelitsha. They had addressed a memo to Plato on 22 November 2018, but were now back because they believe their demands have been ignored.

The SJC, in a statement on Wednesday, said it was disappointed with the mayor’s response to the November memo. It said that the City had spent R4.8 million on Christmas lights in the city centre, which could have been spent on toilets in townships.

“To say that informal settlements are ‘illegally formed’ is to say that millions of people living in the country are illegal. Yes, we occupied land. But, we did so because we need a place to call home … We are not criminals and we should not be treated as second-class citizens in our own country,” read the statement.

“No one lives the way we live because they want to,” said Silulami Vungaye, one of the protesters. “We are driven to occupy by circumstances. We want a roof over our heads. Would the City prefer us to fill the streets under the bridges?”

Some protesters managed to get into a council meeting. They held up placards. The City Council’s Speaker, Dirk Smit, told security to remove them. Vungaye was among those escorted out of the meeting. 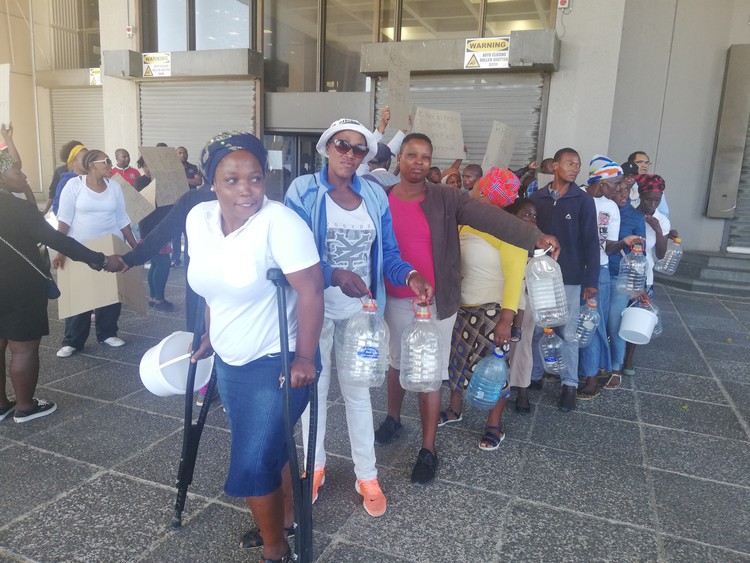 Khazimla Makolo, the woman on crutches at the front of the photo, was knocked over when police fired stun grenades. Photo: Thembela Ntongana

Some residents held buckets and empty bottles to show what they use for toilets and to collect water.

Peter Nkantini said he has to pay R2 at the nearest shopping centre to use the toilet or R20 to charge his phone and R5 for a bucket of water in Kraaifontein. “When rubbish is lying about they say we are slobs. Imagine the difference it would make to have just a plastic bag to throw our rubbish.”

Nkantini said women and children in his community were unsafe because they have to use bushes as toilets. “They have no other choice. It’s the life that we poor unemployed people in this country have to live. The only thing we are good for is voting.”

Outside the centre police tried to push protesters away from an entrance. Some protesters demanded that the police talk instead of using force. Then the police fired stun grenades. Khazimla Makolo, a woman on crutches from Island informal settlement in Makhaza, fell. Others ran. The SJC’s Notywala then shouted at the police demanding to know why they had used force. The police arrested him (see video below).

An hour later Plato spoke to the residents. He said he would visit their communities with the officials responsible for informal settlements to see how they can improve living conditions.

The protesters demanded that he release Notywala, but Plato said that only the police could do that.

The SJC said that Notywala has been charged under the Regulation of Gatherings Act. He was released on Thursday afternoon.

This article was updated with the fact that Notywala was released.

Next:  Protestors demand R70 billion compensation for inventor of please call me service

Previous:  Grade 10 learner sells his paintings to pay for school