SAMWU and Assembly of the Unemployed demand permanent jobs 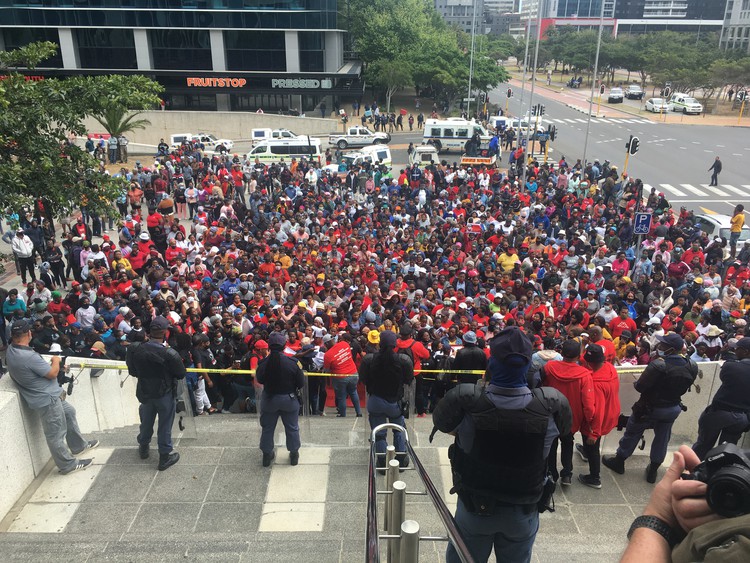 Over a thousand people marched to the Cape Town Civic Centre and Parliament on Wednesday to demand permanent jobs. Photo: James Stent

Over a thousand people marched from Hanover Street, District Six, to the Cape Town Civic Centre and on to Parliament on Wednesday morning to demand jobs.

The group, led by the South African Municipal Workers’ Union (SAMWU) and the Assembly of the Unemployed, handed over a five-point memorandum as well as 7,000 jobseeker applications to the City of Cape Town’s City Manager, Lungelo Mbandazayo.

Marchers came from across the city, with posters which read: “Fight budget cuts, tax the rich”, “Farm workers demand land”, and “Equal rights for unemployed people”.

Marilyn Carelse, a SAMWU organiser, told GroundUp that their Back to Work campaign was a fight for permanent jobs. “The government is busy working out permanent staff for casuals,” she told GroundUp.

SAMWU member Craig van Dalen said he had worked for a city subcontractor as a handyman for eight months as part of the Expanded Public Works Programme (EPWP). When he and 95 other workers went to the Commission for Conciliation, Mediation and Arbitration (CCMA) to get their temporary contracts made permanent, they were fired, he said. He wanted his job back, he said.

Nico Hendrik said he had worked for the City at Newlands Nursery for 25 years, but was dismissed in 2008. Hendrik joined SAMWU after his dismissal. He too was marching to get his job back.

Geronimo De Klerk, from Elsies River, was marching with 350Africa.org. He said that the government needed to address hunger, retrenchments and unemployment in his area.

Michael Khumalo, SAMWU Regional Secretary for the Cape Metro, said they wanted a meeting with the mayor’s office. “It is our cry that the collective bargaining system that we have has been collapsed by the City Manager deliberately. There is no engagement between worker representatives and the employers.”

Khumalo said SAMWU wanted the use of labour brokers by the City phased out. He also said that there were patterns of favouritism in the way the City employed and dismissed certain people. “City policy for EPWP employment says ‘randomisation’, but certain people linked to the City are getting these opportunities again and again.”

The City has been given seven days to respond to the memorandum.

After handing over the memo and applications, the march moved on to Parliament where Minister of Finance Tito Mboweni delivered the Medium Term Budget Policy Statement. At Parliament, marchers joined other protesting groups like Black Sash and Equal Education.

Next:  Covid-19 grant extended to January