Municipal water has not been restored to Tongaat’s 40,000 residents since the April floods 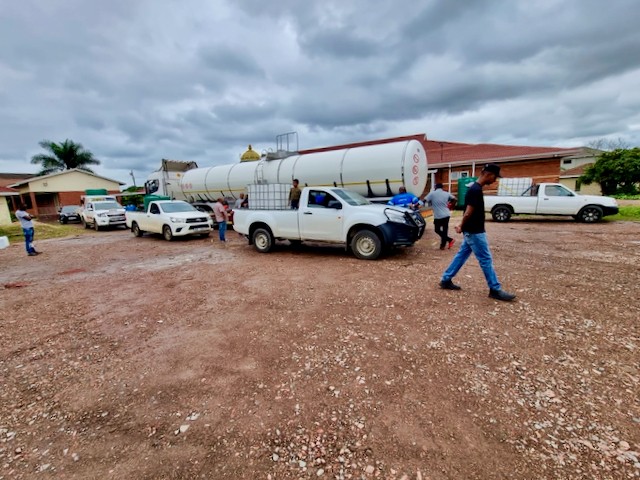 Residents organised their own disaster relief programme in the aftermath of the April floods in Tongaat. Water tankers were requested to park at a central spot and community leaders would deliver water to all the wards within the region. They did this, at their own cost, because water tankers were on a schedule that disadvantaged elderly people from reaching the vehicles, according to Tongaat Civic Association chairperson Don Perumall. Photo supplied: Don Perumall

For nearly five months, taps have been dry in Tongaat, Northern KwaZulu-Natal. The small community of 42,500 (Census 2011), many of them elderly, had their water cut off by devastating floods in April.

Ever since the Tongaat Civic Association (TCA) has been in a battle with the eThekwini Municipality, Umgeni Water and the provincial Department of Water and Sanitation to have their water supply restored.

“Mudslides, flooding, the M4 being washed away … We knew we were on our own,” says TCA chairperson Don Perumall. “But at the time, we thought assistance was just around the corner, and we empathised with everyone in KZN who had been affected.”

But after the third week and still no help and no communication from the eThekwini Municipality, Perumall said the community protested that they were being ignored and blocked parts of the M4.

Perumall maintains they used every avenue available to get the attention of officials to assess and respond to their crisis.

“The President came here. He said relief funding would be released. Tongaat had been declared to be a disaster zone and we expected that help would then reach us,” says Perumall.

At the inquiry last week by the South African Human Rights Commission into the KZN water crisis, Perumall said water had yet to be connected in the area for 127 days. (It is, at the time of publication of this article, 135 days.) He said residents’ lives had been turned upside down in desperation to escape the hardship of living without water.

Gift of the Givers and private organisations have been sinking boreholes at schools, hospitals and places of worship, extending a lifeline to Tongaat.

Speaking to GroundUp after the hearing, Perumall said Tongaat was sitting on an imminent environmental and health catastrophe as raw sewerage was flowing into rivers and directly into the ocean.

Perumall said sewer pipes had started to burst due to insufficient water in them.

“What about cholera?” he asked.

Perumall said the TCA had made practical suggestions. They proposed bridging a line from reservoirs further up north on a 20% of capacity ration from each reservoir to help provide Tongaat with running water. The plan, he said, was not even considered by authorities.

“Someone illegally bridged a line to the Ndwedwe reservoir to get water to us. It worked. For a short while we had water. Then, Umgeni Water found out and disconnected it, basically leaving us with nothing but three water tankers.”

“Residents are way past pleading for dignity and the right to water services,” Perumall said, somewhat ominously.

In July, eThekwini Mayor Mxolisi Kaunda told residents of Tongaat and the media that the delays surrounding the repair of the Tongaat Water Treatment Plant were caused in part by an objection to the company who was awarded the tender. Kaunda said the municipality was able to defend its decision, and work would continue with ICON, the appointed service provider.

Work only started on the Sandfield Water Treatment Plant in August. It is expected to be back up by the end of October.

We have received no response from the eThekwini municipality.

Residents are planning to protest on Thursday.

Next:  Wednesday of discontent: workers picket around the country