“No one wants to stand up for us” say occupiers

More than 50 shacks that were rebuilt on the N2 were demolished again by private security Vetus Schola on Wednesday. The shacks, built on Friday, were demolished in the presence of Law Enforcement officials and the South African Public Order Police.

The land occupiers burnt rubble and tyres on the N2 around 5am after a message that the City of Cape Town was planning to demolish the shacks. Cars, including a delivery truck, were stoned. The message, circulating on social media, turned out to be false. The City of Cape Town’s Wayne Dayson confirmed to GroundUp that they would not be carrying out the demolition as the land is privately owned.

Police fired teargas and rubber bullets at the protesters on the N2, chasing them back onto the ASLA-owned land on which the shacks had been built, and then into Nomzamo.

Then Vetus Schola moved in with men hired to carry out the demolitions. The men had no reflectors or name tags and they struggled with the demolitions. One of them said they had been hired from different places including Philippi, Delft and Khayelitsha. “We were told that we are going to get paid R250,” said one. Some were carrying protective shields.

Documents such as ID and birth certificates were scattered as the demolitions were carried out.

Leader of the land occupiers Veziyalo Madolo said the demolition was illegal. “Last night a letter with no signature or stamp came from Vetus Schola telling us that they would be demolishing our homes. We ignored it because it was not an official letter. We then heard about the planned demolition and started blocking the road this morning.”

Police moved through Nomzamo firing rubber bullets. All the schools in the area had to close. Nomzamo High grade 12 learners were supposed to write a physical science paper.

Bronagh Hammond of the Western Cape Education Department said it was very unfortunate that schools in the Strand area were disrupted. “Learners and educators could not get to their schools due to the protest action – with either walking, bus or car routes affected. Ten schools were affected and had to close due to safety concerns. Learner attendance at two other schools in the area reported high levels of absenteeism, as many use the N2 as a means of passage and were turned back.”

Hammond said they were worried about the exams. “This is a critical time for our learners, especially for our matrics who are currently writing exams. These exams will now have to be rescheduled. It is therefore extremely disheartening, and we ask that our learners’ education opportunities not be affected.”

Four trucks were hired by ASLA to take away the building material. 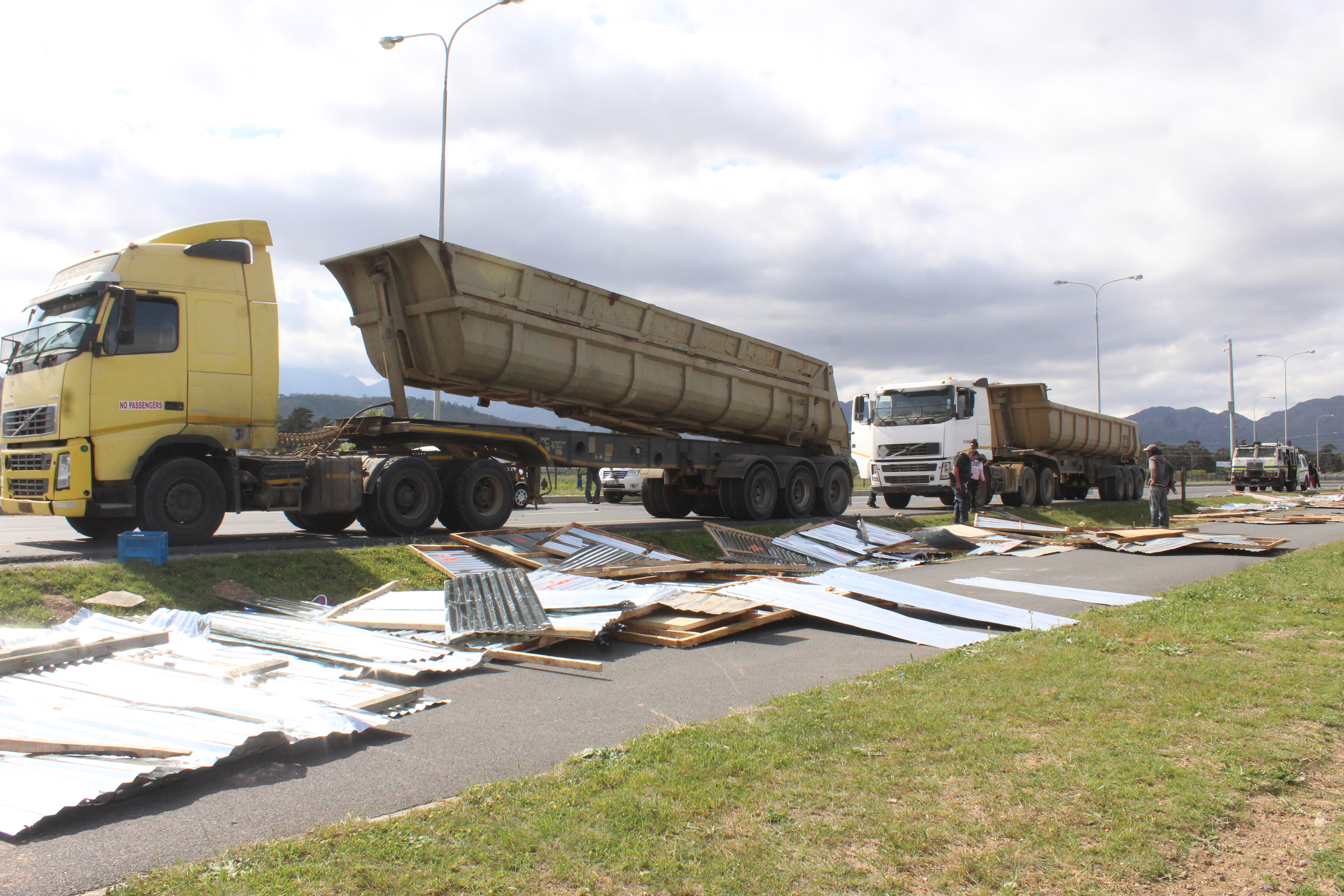 Huge trucks took away the building materials after the shacks were demolished. Photo: Velani Ludidi

Sergeant Noloyiso Rwexana said the police had arrested 13 people. “Early this morning a group of people was protesting after their shacks were demolished, the community members wanted to occupy privately owned land. Police took action to disperse the crowd. A total of 13 people aged between 20 and 35 were arrested, 12 men and a female. Once they are charged they will appear in the Strand Magistrates’ Court. Currently, the situation is calm, police will remain in the area monitoring the situation.”

Madolo said the land occupiers had no one to stand up for them. “We are like orphans. No one wants to stand up for us and we have tried all the legal routes to be allowed to build on this land. We have a municipality that makes promises but never delivers. We are not being unruly and we apologise to all those affected but we will fight till the last drop for this land.” 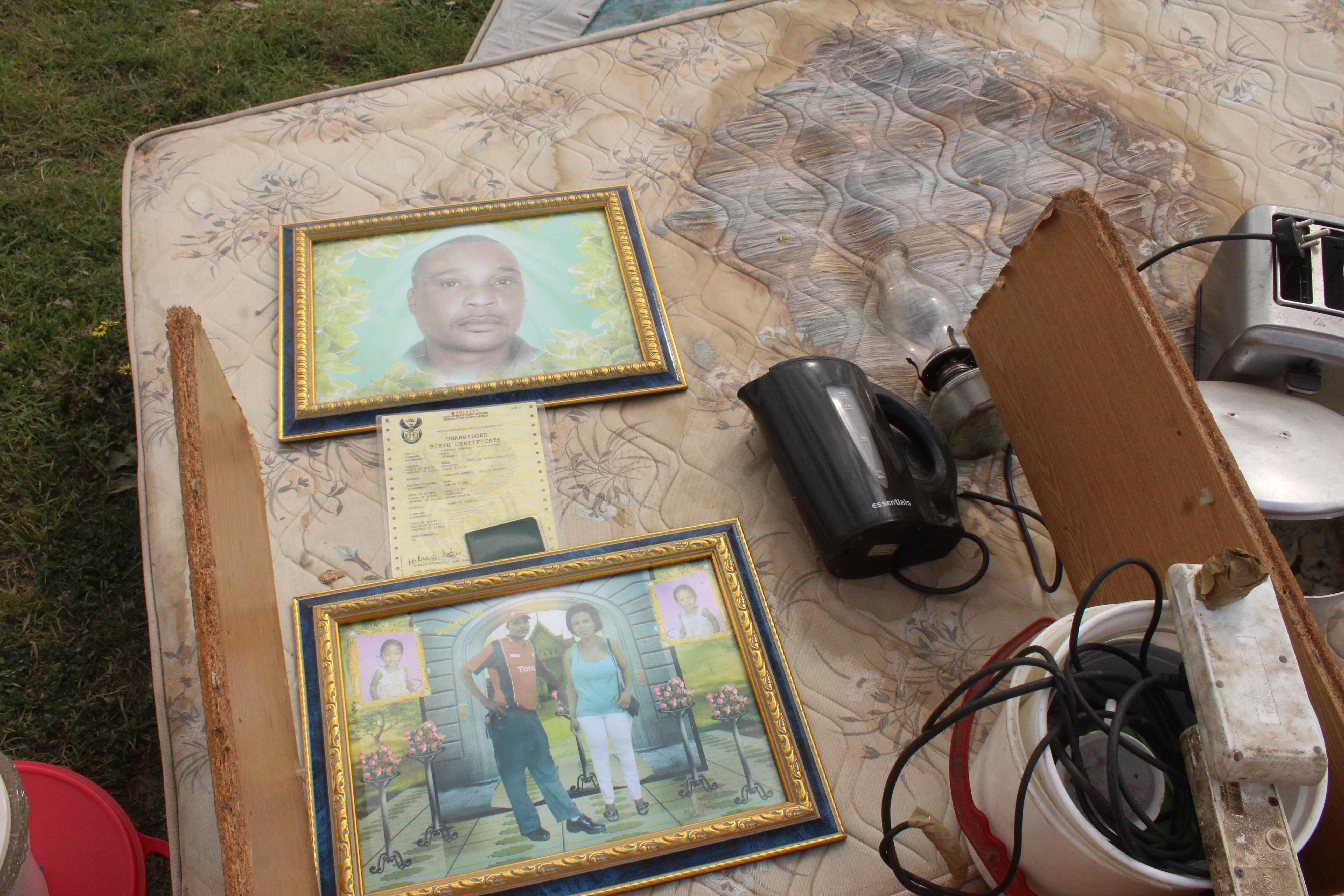 Residents’ photographs and ID documents were strewn about after their shacks were demolished. Photo: Velani Ludidi