Yoruba protest for independence in Pretoria

About 100 people march to Nigerian embassy 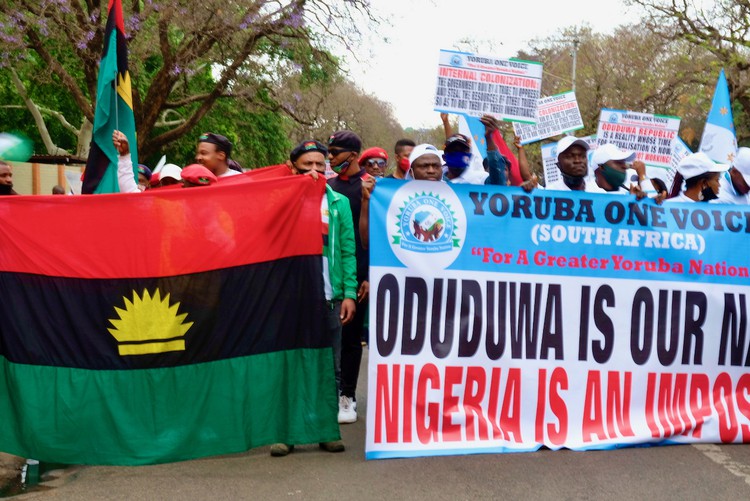 Over 100 people from the Yoruba diaspora marched to the British High Commission and the Nigerian embassy in Pretoria on Thursday. Photo: Elna Schütz

Over 100 people from the Yoruba diaspora marched to the British High Commission and the Nigerian embassy in Pretoria on Thursday, the 60th anniversary of Nigerian Independence.

The demonstrators were raising international awareness of their cause – a “peaceful decoupling of the Yoruba territory from Nigeria” by referendum. They envision a new state, the Oduduwa Republic.

Their memorandum states that the composition of the National Assembly of the Federal Republic of Nigeria is skewed towards the North “resulting in a decision by the majority that is unrepresentative of the wishes, values and goals of the diverse people and nations in Nigeria”.

Dr Sina Okanlomo, Secretary-General of Yoruba One Voice Worldwide, which organised the march, said, “Nigeria as a country is a scam.”

“The resources in our region are being used to develop another region, and therefore we say this does not represent democracy in any way,” he said. “Let every nation in Nigeria have their own country, so that we can have peace in the world and for prosperity.”

A demonstrator with the Oduduwa flag on his shirt, who wished to remain anonymous, said: “I am part of this protest because I believe there is freedom of expression in South Africa … I can’t wear this in my country, I’ll be shot!”

The group was joined by a few dozen people from the Biafran diaspora, who had their own memorandum, called for similar autonomy for that region. Biafra was a breakaway state for several years in the 1960s, which resulted in the Nigerian Civil War.

Some states within federal Nigeria cancelled their 60th Independence Day parades, citing precautionary measures against the Covid-19 pandemic, but local media suspected the planned secession demonstrations may have had an influence.

Other Yoruba groups have reportedly spoken out against a breakaway of the Oduduwa Republic, saying that this could not be done peacefully.

Next:  Scathing judgment against Department of Social Development