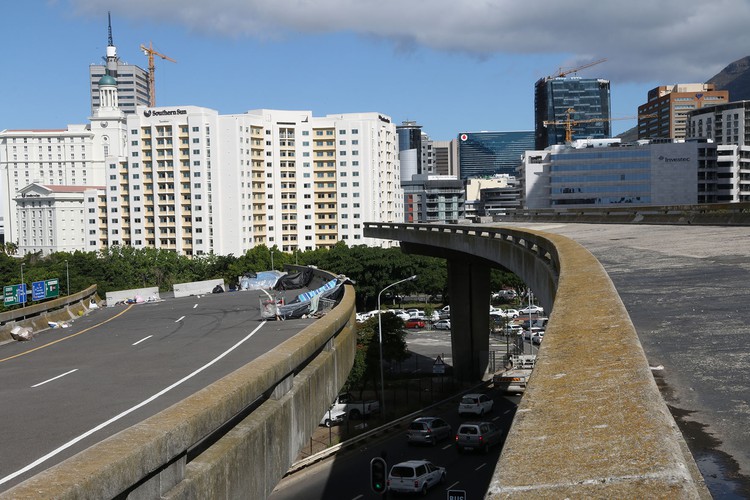 Housing activists have made an urgent call for the City of Cape Town to finalise an affordable housing policy. Archive photo: Steve Kretzmann

In November 2019, Mayco Member for Human Settlements Malusi Booi said the City of Cape Town was committed to drafting a policy for “inclusionary housing”. Three years later, the policy is yet to be tabled.

The City of Cape Town told GroundUp that Mayor Geordin Hill-Lewis has “reviewed the policy work done to date in the City after taking office in November 2021, and has tasked officials to conduct further reviews in order to finalise the most feasible inclusionary housing policy for Cape Town”.

“It is vital that any policy works well in practice and takes into account the feedback of the development fraternity,” said the City.

An “inclusionary housing policy” would oblige property developers to include affordable housing units in housing developments.

Last week, housing activist group Ndifuna Ukwazi launched a report, titled Regulating the Private Sector. In it, the researchers make an urgent call for the City to complete and implement an Inclusionary Housing Policy.

According to the report, the City has a shortfall of about 23,000 formal homes per year.

“While 76% of Cape Town’s population earn below R22,000 per month, only 34% of all formal homes cater to households in this income range,” the report says.

“There is clearly a significant mismatch between what people earn and how much homes cost,” it says.

Meanwhile, at a provincial level, the Western Cape government passed its Inclusionary Housing Policy Framework on 4 November. It aims to assist municipalities, working in partnership with the private sector, to include more affordable housing units in developments in urban centres.

According to the province: in 2019, the Western Cape’s estimated average monthly household income was R19,430. The average Western Cape household is therefore unlikely to be able to afford a property of more than R600,000. However, the average property sale price in the Western Cape in 2021 was R1,350,000. To buy a property at this average sale price, a household would need to earn a gross monthly income of over R33,000 (assuming a 10% deposit, 7.75% interest rate, and 20-year loan).

The NU researchers say that in practical terms, private developers can be offered incentives in exchange for creating affordable housing within their developments, on land nearby, or through a financial contribution.

NU researcher Robyn Park-Ross said that although inclusionary housing is not a silver bullet for the housing crisis in Cape Town, it is needed to tackle spatial apartheid in the city by creating affordable housing in well-located areas. This would help break down race and class segregation, said Park-Ross.

The NU report also documents 16 private developments across Cape Town that have included some form of inclusionary housing contribution.

The number of affordable homes within the developments varied from 5% to 30%.

“In an environment of policy uncertainty these contributions demonstrate the minimum of what is possible … They provide a base from which to develop more meaningful contributions in the future,” says the report.

But the researchers noted a “concerning inconsistency” around affordability, access, location and the physical standards of the homes, among other issues. The report says, “Clarity and consistency are desperately and urgently required, both of which can be provided by an appropriate inclusionary housing policy.”

Next:  Disabled Dunoon residents roll up their sleeves to clean a school

Previous:  Covid: Vaccine drive is running out of steam

The city, by not thinking out of the box, is battling to find a way to bring affordable housing into the city, near the jobs. This is impractical for so many reasons. Far better to move the jobs to where the people are.

If the city centre relocated itself East of the M5, along the M7 i.e. where Epping is now, building major roads in the process, many problems would be solved. It is not that difficult to do.

Step one is encouraging industry, especially the heavier industry, to re-locate, preferably to Atlantis - helps the pollution over the Flats. Replace it with commerce and services - starting with ALL the Council offices. They would be in a more central position for all Capetonians there, than now, where we squeeze between the sea and the mountain to get to the City Bowl. Add a decent hospital in that area, and the rest would follow over time just as many former industrial areas near the Foreshore changed.

The City Centre would be in an accessible area between the M5 and M7 and N1 and N2 - where it should have been planned 400 years ago if we had known how large the city would become.