Westlake township residents get water one hour a day, while affluent neigbours have normal supply

Situated close to the lavish golf course of the affluent Westlake area is a township. Here, a number of residents have been left without running water during the day for the past few months and only have running water before dawn for approximately one hour.

“In the day we don’t get water. It only comes around 4am. So we have to wake up and get water because before 5am it could be gone,” says Christina Chirwa, a Westlake resident.

The most difficult part of having no running water during the day for Chirwa, is that the washing machine does not work as no water runs through the tap attached to the machine’s pipes. She has to manually pour water into the machine to do her washing.

Her family also shares a communal tap with four other households, so each household on the property collects water from the tap every second day to make that water last longer.

GroundUp’s numerous attempts to get comment from ward councillor Penny East were unsuccessful. The City of Cape Town could only tell GroundUp that it will ask technicians to look at the problem.

Both Reddham House Constantia and Vovo Telo Cafe situated in the Steenberg Village Centre confirmed that they receive running water throughout the day. They are located next to the affected area.

James McAdam, another resident of Westlake, says seven families share a tap on the property he lives on. The water comes on for an hour every morning except on a Wednesday. On Wednesdays, he gets water from his mother who has a shop.

“We might get about 50 litres a family, but it has to last us the whole day,” he says.

McAdam says that his parents pay a monthly fee for household water to the municipality at Pick ‘n Pay, yet still do not receive running water during the day.

He says the problem started this year. He believes that the water supply is beginning to decrease, as recently his family and neighbours have sometimes received only 30 litres of water per day.

He says it is embarrassing not to be able to wash properly and to have to drink water kept in a bucket.

Zoleka Skefile lives on a property with seven backyarder families and a landlord. She says that they have had no running water during the day for four months now. When needing to go to the bathroom, Skefile and her family cannot flush the toilet because of the lack of water.

Skefile says the family members sometimes have to go to Pick ‘n Pay or ask a neighbour to use their toilet. They also use grey water to flush.

A City official told GroundUp that he had visited the area after our query. He confirmed that some households had limited water quotas because they were in arrears on their accounts. But this was denied in the case of Harry Chirwa, father of Christina, who said he pays the municipal accounts every month at Pick ‘n Pay.

The official said that most residents had running water throughout the day.

“The City visited the area [on Thursday] to investigate these claims, and found no problem with the water pressure to the area. Property owners that the City’s water inspectors spoke to advised that they have water pressure day and night.

“The City did identify that a number of properties in the area have been fitted with Water Management Devices which can be set to limit water consumption a property to a certain number of litres per day. These are commonly installed after residents either run up bills they are unable to repay, or contravene water restrictions. Meters are also installed at the homes of residents who register as indigent, and provide an allocation of 350l/day to these properties.

“Leaks on a property’s internal plumbing can deplete the daily water allocation to the property before they have a chance to use it. If residents have water for an hour in the morning before it cuts out, we would advise these residents take steps to locate and fix these leaks to ensure their daily allocation is not running to waste.”

This article was updated twice with City comment after publication. 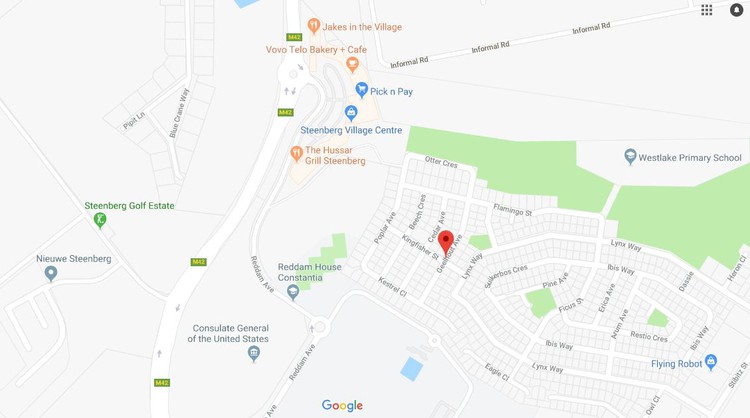 The red pin shows the township in Westlake. The areas surrounding it all have normal water supply. Image captured from Google Maps.

Next:  People robbed of ARVs because of whoonga myth