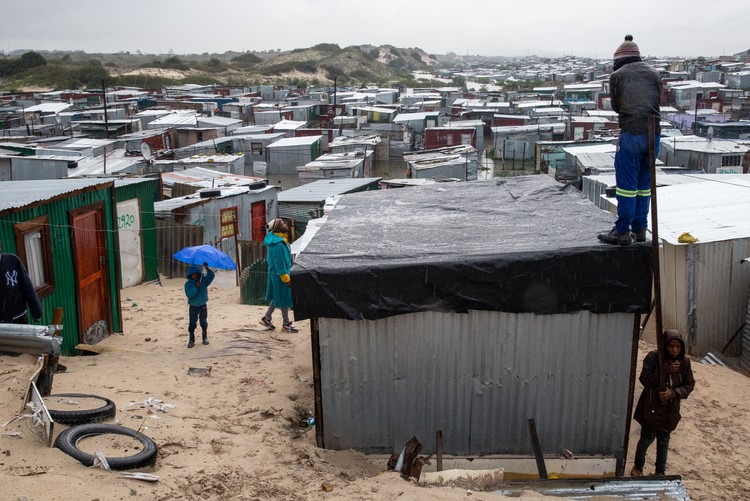 Shack settlements like this one in Mfuleni, Cape Town were once thought to be temporary. But government policy has to adapt to and accept that they are permanent. Photo: Ashraf Hendricks

Over the past five years the Western Cape Department of Human Settlements has scaled up its support of informal settlements. With eight organisations, it has implemented the Informal Settlements Support Programme (ISSP) in municipalities across the province.

The programme accepts that informal settlements in our cities are permanent and that the state does not have the funding to stop their growth by building enough houses.

The Western Cape Government has said that despite “previous convictions” informal settlements are a “permanent feature of the provincial landscape and cannot be eradicated in a short space of time” and with government’s funding and capacity.

The ISSP anticipated a shift by the state, away from subsidising the building of houses and towards serviced sites. It included organisations to develop partnerships between municipal government and informal settlement communities to improve living conditions.

To date 14 municipalities in 52 informal settlements, consisting of about 40,000 households, have benefitted in various ways. These have included detailed surveys and maps of settlements, the establishment of community structures that take part in municipal decisions, upgrade plans, providing much-needed services, working with the public works programme to recruit and train residents to carry out upgrades, community based planning, and conflict resolution training.

The ISSP has shown a new approach to informal settlement upgrading with a focus on often neglected towns in the Western Cape.

In Villiersdorp (Theewaterskloof Municipality) an enumeration of eight settlements (4,500 structures) identified almost 2,000 households who had no access to sanitation and still used the bucket system.

The uptake from municipalities has varied, with some embracing the shift and others resisting change. Resistance stems from entrenched hierarchies, relationships with external contractors, and patterns of practice that have existed for decades under the old housing subsidy approach.

A lack of clarity from national government as to how the new site and service approach to informal settlements will be implemented has led to uncertainty and confusion at the municipal level.

The ISSP should be recognised for what it has already achieved and it should be supported so that it continues. The experience of the ISSP must inform the national debate; it offers concrete suggestions on how a site and service driven programme could be implemented.

There is a desperate need for projects to demonstrate how informal settlements can be upgraded. Projects need to rebuild strained relationships between poor communities and local government. Project sites can become learning centres for neighbouring communities, municipalities and their officials.

Several municipalities have shown the political will to proceed. Capacity is often lacking but with the support of specialised organisations, such challenges are not insurmountable. The energy is there on the ground. The state needs to show the same commitment as the people. Municipalities must accept the support offered to them. Only a partnership between these communities and municipalities can provide a sustainable outcome.

Noah Schermbrucker is programme co-ordinator for Peoples Environmental Planning who participated as one of the eight non-government organisations in the ISSP programme.