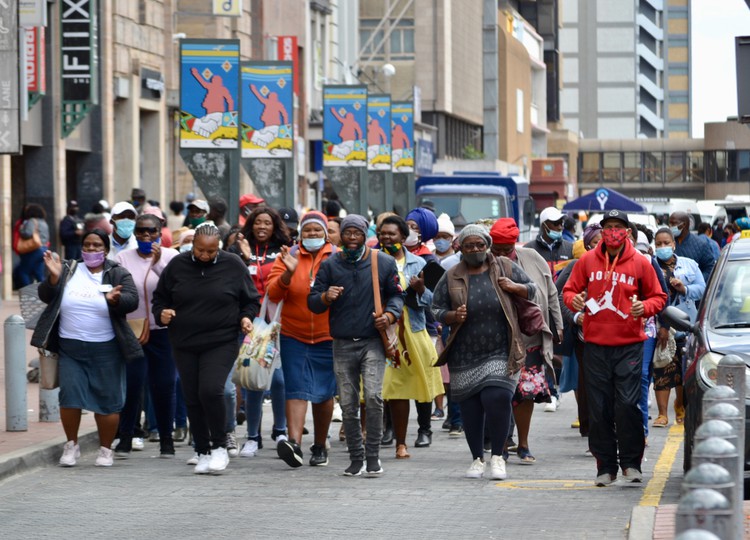 About 100 ward committee members in Nelson Mandela Bay protested outside the city hall in Port Elizabeth on Friday afternoon.

They demanded backpay, skills development training and personal protective equipment (PPE). They said if the municipality failed to meet their demands within seven days, they will go to court.

There are ten ward committee members per ward in the city’s 60 wards, making up 600 people. They were voted in by residents in 2017, under the supervision of the Independent Electoral Commission, to serve under ward councillors as heads of desks such as human settlements, tourism, and safety and security.

Luvuyolwethu Makedama, a committee member in ward 50, KwaLanga, shouted at the protest: “Councillors are nothing without us. Our grievances look small, but it is our right to get what we want.”

“In this metro, they [politicians] are fighting among themselves and those battles have nothing to do with development of our workers and residents,” said Makedama.

Protesters whistled, sang songs and carried placards that read: “Down with Mbebe” and “We want our money Mbebe”. (Dumisani Mbebe is the director of constituency services.)

Protest leader Litha Cetywayo, who serves as safety and security officer in ward 4, Walmer, said their monthly stipends were increased in 2019, from R1,000 to R2,000 a month. “The money was increased in April, but we received [the increase] in July. We also want the three months back pay.”

“Last year, after we protested, we received 200 cellphones instead of 600 of them. Those cellphones were weak and cheap and they could not even last for a month.”

Vuyiswa Mgquba, who runs the women’s desk in ward 38, KwaNoxolo, said she never gets a response to the reports she submits to the municipality.

In the afternoon, the protesters entered Noninzi Luzipho Building to meet with constituency services officials. They were still in a meeting at the time of publication.

Municipal spokesperson Mamela Ndamase said ward committee operations are governed by the Policy on the Establishment and Functioning of Ward Committees which was adopted by Council in May 2017. Between August 2016 and July 2017, there were no ward committees in Nelson Mandela Bay Metro. “Based on the above there is no legal basis for the claim of back pay,” she said.

She said the municipality has been distributing PPE to ward councillor offices, which included surgical masks, sanitisers, soap, and gloves since April.

She said ward committee operations were put on hold and are suspended until the end of September to manage the spread of Covid-19.

“At an institutional level, we can only train ward committees on one module out of ten modules per financial year … due to budget constraints. “

She said cellphones had been procured and they were awaiting delivery.

Next:  Lockdown in pictures - Day 155: Hawking on the streets

Previous:  Alexandra gogo feeds families that “fell through the cracks” during lockdown

Without the right to public transport, most people can’t access their other rights