Mineral Resources Minister Gwede Mantashe has delivered a tough message to the controversial Australian mining company that owns and operates Tormin, a highly profitable mineral sands mine on the West Coast near Lutzville through its South African subsidiary.

Responding to concerns raised at a community meeting attended by about 200 people in Lutzville on Friday, Mantashe told Perth-based Mineral Commodities Ltd (MRC) and its subsidiary, Minerals Sands Resources (MSR), that it had to talk to their workers and communicate comprehensively and meaningfully with the surrounding local communities. It should promote local South African staff to top management positions instead of bringing in its own nationals. This extended to all other mining houses operating in South Africa, Mantashe explained.

Mantashe confirmed that mines had to comply with environmental regulations and that his department would take legal action if they did not.

But Mantashe, who has held the cabinet post for nearly a year now, did not acknowledge that the government’s One Environmental System, which came into effect in December 2014, has placed all environmental controls over prospecting and mining, other than appeals, in the hands of his Mineral Resources department. Instead, he suggested – incorrectly – that environmental policing of mines was still done by the Environmental Affairs department.

MSR has applied to Mantashe’s department for a huge expansion of its current mining area at Tormin. 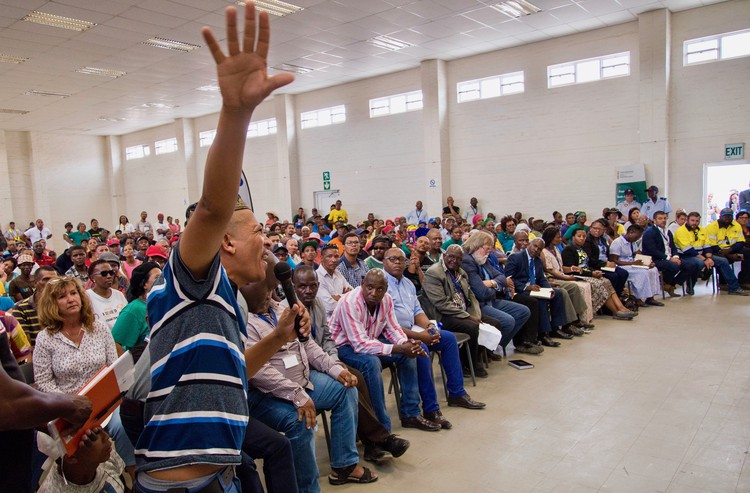 Koekenaap pastor Gary Klaase addresses the community meeting in the Uitkyk Community Hall in Lutzville, raising concerns about the nearby Tormin mineral sands mine.

MRC’s other South African company is Transworld Energy and Resources, which has been trying to establish a mineral sands mine at Xolobeni in Pondoland for the past 15 years, so far unsuccessfully. Mantashe’s last two visits to the local Amadiba community, where there is strong opposition to mining on the ancestral land at Xolobeni, ended with police intervention and chaos.

There were concerns that the Lutzville community meeting could also turn violent, and there was a strong police presence at the Uitkyk Community Hall on Friday morning where Mantashe and a large delegation of his top officials met Matzikama Municipality Mayor Johan van den Hoven (DA), councillors, political leaders and municipal officials.

The meeting was closed, drawing noisy objections from a small crowd who were locked out of the community hall grounds.

Afterwards, Mantashe was taken on a short in loco inspection of the Tormin mine, about 25km away, by MRC executive chairman and chief executive officer Mark Caruso. They returning to Lutzville for a 90-odd minute session with people from local communities, such as Lutzville, Koekenaap and Vredendal. The meeting was peaceful but lively, with shouts, interjections and short arguments between speakers posing questions to Mantashe from the floor.

Caruso listened impassively from his seat in the front row as Mantashe heard a litany of complaints about MSR.

Lutzville activist Davine Cloete, one of seven people facing an alleged SLAPP suit (“strategic lawsuit against public participation” designed to stifle and harass critics) brought by MRC/MSR, told Mantashe she had a right to speak out.

“I’m not against any mining or any mining company. Poverty is so high in this area,” she said. But MSR had brought workers from the Xolobeni area to work at Tormin and had also “chased away” local workers at the mine when they attempted to unionise, she added.

“Now the people are hungry. Why must we be kept outside the gate? MSR doesn’t even recognise us. They should have said ‘Let us talk’. We are not going to stop fighting until then. MSR, come to us and listen. And until then, close your gates and go back to Australia,” Cloete said to loud applause.

Gary Klaase, who says he is a pastor from Koekenaap, said MSR’s promises of significant employment had not materialised and that workers who had taken part in a peaceful protest in 2015 had been “locked up”.

“Minister, if you want to do something today, chase these people [MSR] away. We don’t want them here.”

A man wearing EFF colours put it more bluntly. “If I was leader of this region, I would tell the leadership and management of MSR they must f*k off! It sounds like they are coming to South Africa to exploit our people.”

When Mantashe took to the podium, he explained that he and his delegation were visiting Tormin to check the mine’s compliance with environmental, social and labour plans, transformation, and health and safety imperatives, as stipulated in national legislation and the Mining Charter.

“And they’re not!” someone interjected loudly from the floor.

But he noted the high poverty levels in the West Coast region, and emphasised that companies like Tormin had to employ staff in terms of a workable ratio between locals and those from other areas to prevent tension between them. Communities had to organise themselves to achieve this, he explained.

This proposal drew loud interjections from some of his audience: “We can never go to that mine, they block the gates!”

Responding to complaints about Tormin workers not being allowed to unionise, Mantashe said this was a constitutional right of all South Africans – “You don’t need anyone’s permission to form and join a union.” 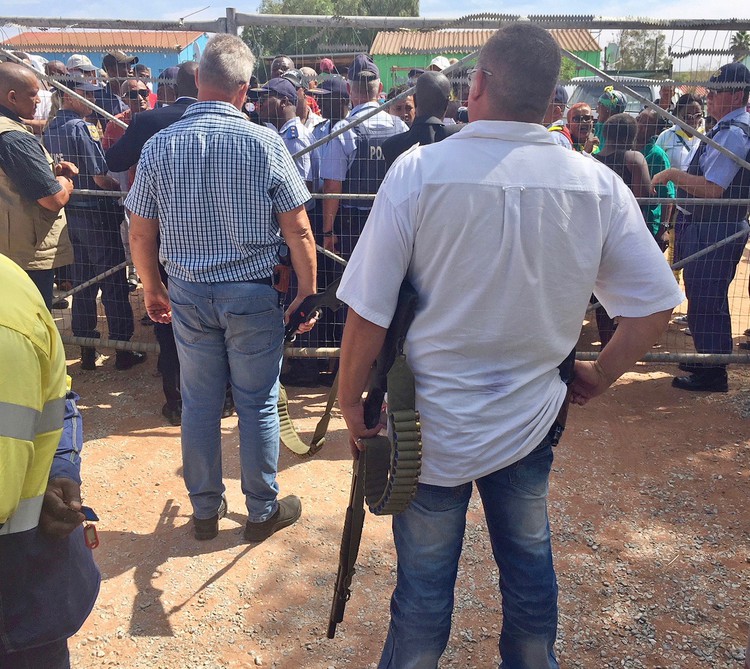 Mantashe noted that during the previous week at the 25th Investing in African Mining Indaba in Cape Town, representatives from the Alternative Mining Indaba had delivered a memorandum on the need for communication between all players in the industry, and said consultation with communities was “paramount for us”.

“If we don’t talk, we won’t find solutions to the problems facing us. This is an issue MSR must pay attention to; it’s quite a serious thing. The complaint is that, ‘They don’t talk to us’,… I’m not a spokesperson for MSR, they speak for themselves. MSR must work with the people. What they do in this community will determine their future in this community.”

To loud applause, Mantashe continued: “MSR must consult this community before we grant the licence [to expand the mining area]. It will help MSR more than anything else … That company must sit and talk with people, and talk and talk. Otherwise it becomes a nightmare.”

Mantashe chastised MSR for not promoting local people into the company’s top management structure. Noting that other major Australian mining companies like Rio Tinto had understood this imperative when operating in South Africa, he said: “They [MSR] can’t only have their top management from Australia. That message comes through over and over. Top management must come from here; there are skills that are here,” he said to loud exclamations of “Yes! Yes!” from the audience.

Xolobeni battle far from over

So the real issues of environmental non-compliance and devastation have become subjugated to a minor employment issue.
All MRC gets is a slap on the wrist and is told to play nicely with the locals and create more jobs while it devastates the region.

Imagine how this will play out in Xolobeni. This is not over by a long way. He still needs to make his SLAPP suits against us stick in court.