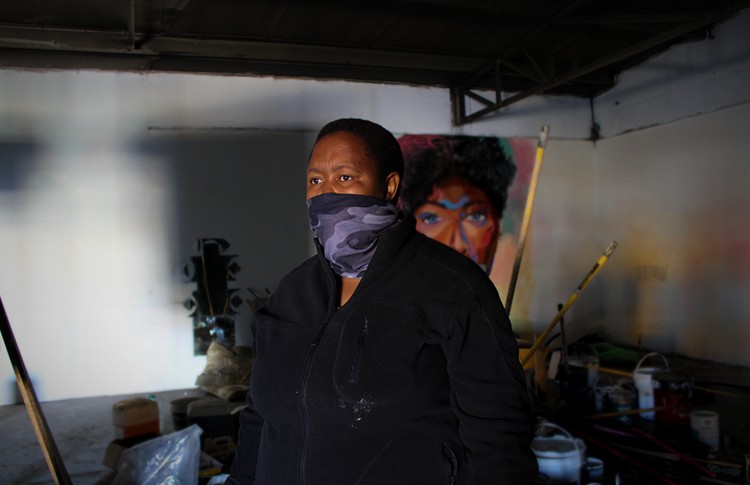 Mampho Lesoana is a dressmaker who lost her business when the Kliptown market was looted in July. Volunteers started helping her and other traders who were uninsured to rebuild their business spaces at the market. Photo: Masego Mafata

“We weren’t here when the looting happened. I keep thinking that maybe if I had come sooner, I could have saved my things. It will take me years to rebuild,” says Mampho Lesoana, whose shop was looted during the riots in Gauteng last month.

Lesoana is a dressmaker who has been running her business from the traders’ market at the Kliptown Taxi Rank in Soweto since 2008. Due to the looting, she lost about R20,000 worth in equipment, a business that took her more than a decade to build, she said.

Two organisations, Phenomenal Women and Step Up SA, are currently repairing and refurbishing 15 uninsured shops at the traders’ market to help business owners like Lesoana get back on their feet.

Business owners at the market told GroundUp that they had lost everything when the market was looted. Sabinah Mukhekhoni, 73, who sold furniture for ten years, said she thought she would never trade again because her old age grant is not enough to restart her business and support her family.

During a press briefing on Friday, Gauteng Premier David Makhura said the riots “had a terrible impact on the Gauteng economy”, costing at least R3.5 billion in damages and 14,500 job losses.

According to Makhura, this preliminary figure excludes uninsured township businesses. The provincial government is still calculating the cost to uninsured businesses like the market in Kliptown.

The traders’ market, managed by the Johannesburg Property Company, is a stone’s throw away from Freedom Square, where the Freedom Charter was adopted in 1955.

For Christina Kole, 73, a business owner at the market, the loss of her stock meant that she had no income for almost three weeks. “I am a breadwinner. I live with my son who is unemployed, and my grandchild. My grandchild attends school and I have to pay for everything. I can’t make ends meet,” she said. Kole, who sold handmade cushions, bedding and second-hand clothing, currently relies on food donations from Phenomenal Women.

According to Chriszelda Jooste-Swartz, a community activist and Phenomenal Women member, the traders’ market and adjacent shops are usually a hub of activity. “The looting was quite heartbreaking. It was scary to see this area go from busy to what felt like a ghost town overnight.”

Jooste-Swartz contacted volunteers on the Rebuild SA Facebook group, which was started to connect affected people and businesses with volunteers looking to help.

“The week after the looting, someone from Step Up SA responded to my Facebook post, volunteering to help. Since then, we have collaborated with Step Up SA and have started to revamp the traders’ market so that the business owners can set up their shops again soon,” she said. 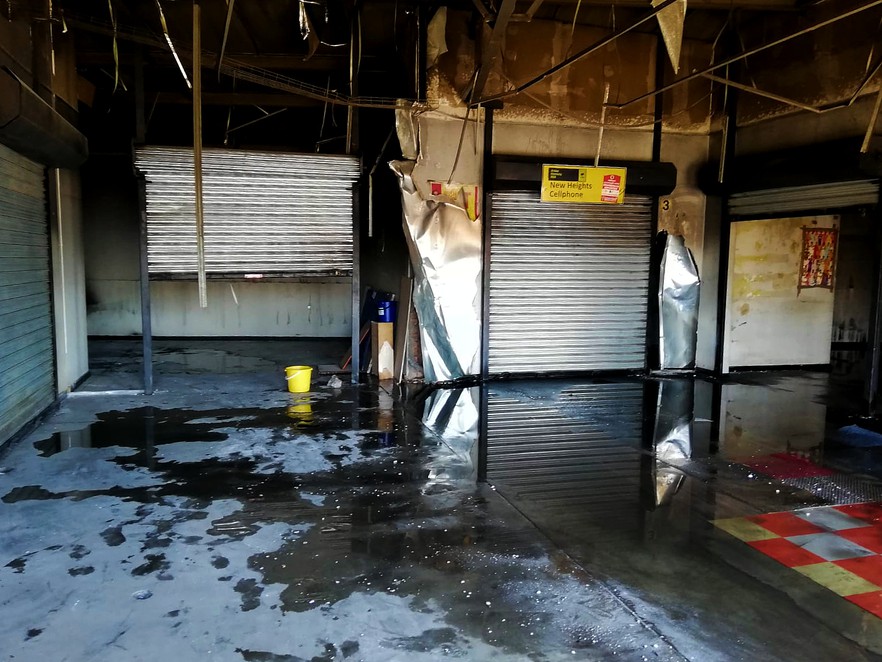 Electrical wiring and water pipes were damaged when shops at the Kliptown Taxi Rank were looted, leaving shops without running water and electricity. Photo: Supplied

The team of volunteers helping revamp the market include builders and accredited contractors. They have repainted the walls and are in the process of installing shelves, flooring and new ceilings where needed, said Swartz.

Mukhekhoni said it was heartwarming to see that people still cared. “While it is difficult losing your business, the help we are receiving really gives me hope that I can rebuild,” she said.

Step Up SA’s Dani Donald said once the interior of the market was complete, they would help the traders move back and ensure that they have stock to sell. She said they hoped that the project would be completed in a month. Asked whether the City of Johannesburg was assisting with the revamp, Donald said no official had contacted them yet.

The Gauteng Enterprise Propeller (GEP) also announced that the provincial government will be helping informal and uninsured businesses affected by the riots.

Zamxaka said eligible applicants would have to provide proof of trading prior to the riots as well as bank account details and lists of suppliers.

Next:  Wild Coast: is there a future in eco-tourism?

Previous:  July riots caused more than R100 million in damage to schools in KZN and Gauteng