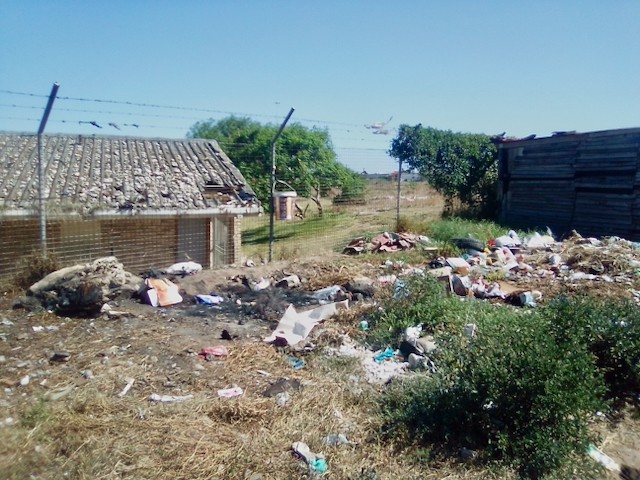 This spot outside Nxanelwimfundo Primary School in Port Elizabeth has become a place for mob executions of suspected criminals.

Two brothers were burnt to death on Friday outside Nxanelwimfundo Primary School in Port Elizabeth after they were allegedly found carrying roof metal sheets.

Three weeks ago GroundUp reported on two other vigilante killings outside the school near Powerline informal settlement in Motherwell.

The men were beaten, then dragged to the fence of the school, and burnt alive.

Police spokesperson Colonel Priscilla Naidu said, “They were tied up and had sustained visible multiple wounds. They were burnt beyond recognition … The brothers were identified as Onele Msizi, 22, and Limnandi Msizi, 23.”

Vigilante murders have divided the community between the shack dwellers and formal homeowners.

A homeowner, who did not want to be identified, said, “What gives these killers the power to kill other people? They are known to us … I don’t condone crime but why can’t they report suspected criminals to the police given that the Motherwell police station is a few metres away from their shacks?”

Another homeowner said, “The air is always filled with the smell of burning human flesh. The government should erase this informal settlement because they are exposing our children to graphic scenes of burnt bodies.”

At a meeting of informal settlement community members on Thursday afternoon, one resident said: “Criminals know that if they get arrested they will be released on bail. They come out from the cells bragging that they are the untouchables. We don’t have money to hire security guards to protect our shacks and property. We will do it ourselves and kill whoever wants to steal from us.”

“Many times the community takes the law into their own hands and no cases are reported against the person they allege to be a suspect,” said Naidu. “We appeal to the community of Motherwell to work with the police and to report all criminal behaviour to law enforcement and to stop acts of vigilantism.”

Next:  Cars and buses torched in electricity protest