There will be no funerals until the sewage system is fixed, residents threaten

“We live in a pigsty” 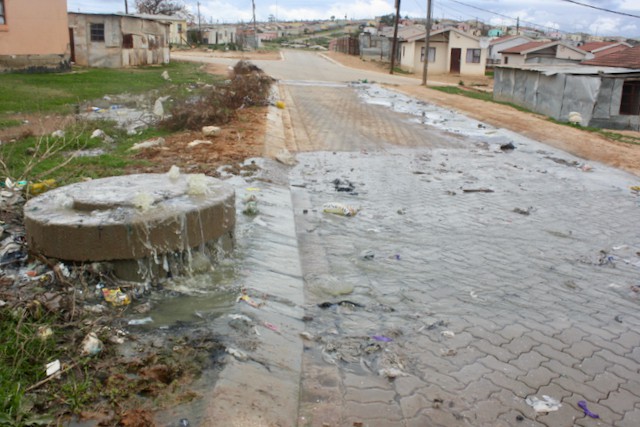 Residents say this drain on Siwani Street in Peace Village, Kariega, has been overflowing with human waste for months. Photo: Thamsanqa Mbovane

Raw sewage can be seen bubbling up from a drain on Siwani Street in Peace Village, KwaNobuhle, in Kariega, Eastern Cape. Residents say it has been this way for many months and they are fed up. They intend to close all roads leading to Matanzima Cemetery and stop any funeral processions from being held.

This form of protest has worked before when residents wanted Siwani Street paved and when they wanted people moved out of shacks.

“Human excrement has been floating down our streets past our RDP houses and zinc churches for over five months,” said community leader Yoli Tom.

He said the matter had not only been reported to the municipality and a reference number obtained, but also reported to then ward 47 councillor, Nontuthuzelo Skweyiya.

Resident Lwamila Vumazonke-Tayi said she’d have thought the politicians would have at least bothered to fix the drain before the 1 November local government elections. As a result “many people didn’t vote because there is no service delivery in Peace Village”, she said. “We live in a pigsty.”

We first contacted municipal spokesperson Mthubanzi Mniki on 8 September about the overflowing drain and gave the complaint reference number. We made follow-up calls too.

But the drain keeps on bubbling.

Former Mayco Member for Infrastructure and Engineering Thsonono Buyeye said the problem is one of ageing infrastructure all over Nelson Mandela Bay.

“You fix now but in a week’s time, the drains are spewing human waste again. We need to change the infrastructure,” he said.

Next:  GroundUp’s Ray Joseph is suing the Chief Operating Officer of the Lottery

Previous:  By the time Home Affairs reopens its Cape Town refugee office it will have taken ten years