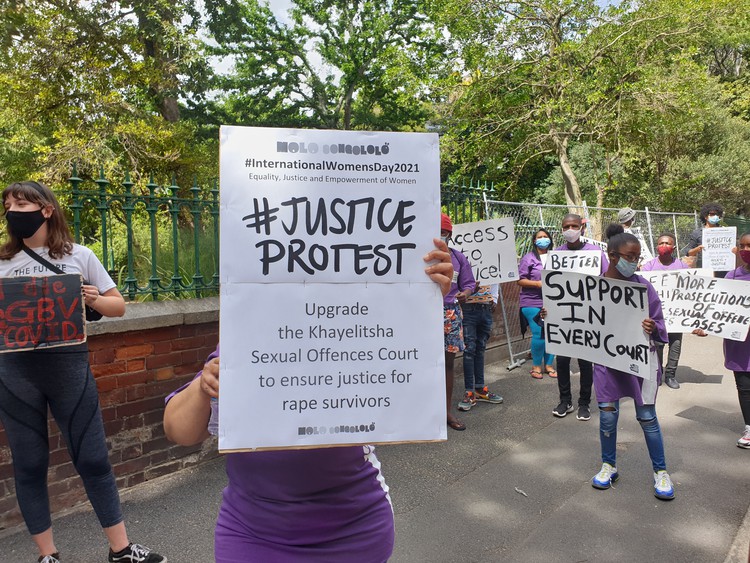 Dozens of Rape Crisis activists and supporters picketing outside the Justice department’s office in Cape Town on Monday. They are demanding proper upgrades to the sexual offences court in Khayelitsha. Photo: Mary-Anne Gontsana

Activists and supporters of Rape Crisis’s Rape Survivors Justice Campaign (RSJC) protested outside the Department of Justice and Constitutional Development in Cape Town on Monday. The group say there are still services not being fulfilled at the sexual offences court in the Khayelitsha Magistrate’s Court, despite recent upgrades to the building.

The protest on Monday also coincides with International Women’s Day. Dozens of women, dressed in purple tops, sang as they held up posters which read “We need the right criminal justice system”, “Access to justice” and “Justice for rape survivors” outside the department’s Western Cape Regional Office.

The group handed over a memorandum to Noluvuyo Bekwa, the director of justice operations in the department.

Visiting the court on Friday, GroundUp spoke to Rape Crisis’s Ntombekhaya Norushu, who works at the court supporting rape survivors. She showed us around the court.

Since our last visit in December 2020, some notable changes had been made.

But there was still only one bathroom which increases the likelihood of a survivor, or witness, coming into contact with the accused or an accomplice who might be waiting near the courtroom.

A mobile unit (shipping container), meant to be used as a safe space for survivors, had still not been delivered.

Also Norushu’s office — which would be one of the places most visited by rape and assault survivors — was still situated on the second floor. This despite the other sexual offences court facilities being on the ground floor.

Her office is in a dark narrow passage, opposite a window where people pay their traffic fines. The door handle was broken which means her door can never truly be closed for privacy when she’s meeting a client. The office has old office chairs, a desk, an old cabinet and a telephone that is not connected.

“Now imagine I have to counsel clients here. There is no privacy. Sometimes the door will just open or someone will just push it and walk in while I’m in a session,” said Norushu.

Norushu said the only “upgrade” to her small office was that it was painted and blinds were added to the window.

Norushu explained why it was important that she be located closer to the court. She said often the clerk of the courts only calls out the survivor’s name outside the courtroom, when in fact the person could be in her office on the second floor. She said the clerks don’t come to check if the person is with her either.

“I have to keep the windows open so I can hear when they need the client,” she said.

“These ‘upgrades’ do not favour the work that we as Rape Crisis do,” said Norushu.

But Department of Justice spokesperson, Chrispin Phiri, said they have completed upgrading the court. “When evaluated against Regulation 55A, the courts are deemed to be accessible to people living with disabilities.”

Phiri said that a “private entrance for survivors of sex crimes” had also been made with a secure access control system to restrict access by the accused and other court users. “It is also intended to safeguard the survivor’s rights to privacy and dignity, thereby minimising secondary traumatisation,” he said. 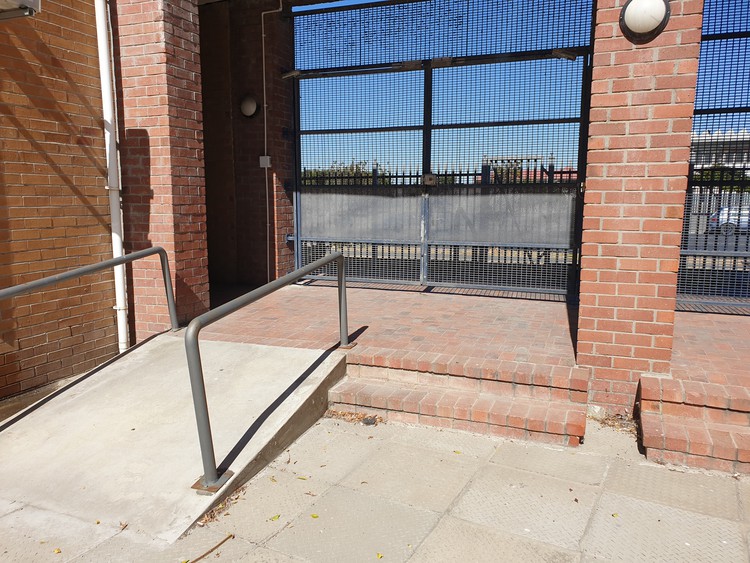 The Justice department says it recently created this “private entrance for survivors of sex crimes” and built a wheelchair ramp to improve accessibility. Photo: Mary-Anne Gontsana

Phiri said delays to some of the upgrades were because the site had “limited infrastructural space”. He said this is why the department procured mobile units that could function as waiting rooms for survivors and children.

“The Khayelitsha courthouse falls under a category of courts permitted to provide shared private waiting rooms for both children and adult survivors, due to infrastructural limitations. The check list has the buy-in of several civil society organisation, particularly Rape Crisis,” he said.

On inspection of the upgrades Phiri mentioned, GroundUp was shown the fenced off section of the courtyard which had a separate entrance and a ramp.

Ahead of the picket on Monday, Jessica Bobbert said the department had in fact not delivered on the promises it made in 2020. This included that a shipping container would be used to provide a safe space for Rape Crisis’ court support services as well as private access to a restroom for survivors.

Bobbert said the container was a cost-effective solution. “The recommendation for the container was made in 2018 and we have called for its establishment for the last three years. The department has had ample time to secure its procurement, hence our disappointment with the ongoing inaction,” she said.

Speaking to GroundUp at the picket, Mandisa Mbotshelwa, the RSJC’s advocacy coordinator, said there was no timeframe for the department to respond. “We are handing over this memorandum, hoping they will be shaken and speed up the process of getting the shipping container to Khayelitsha court,” said Mbotshelwa.

Next:  PRASA blunders then blames the media