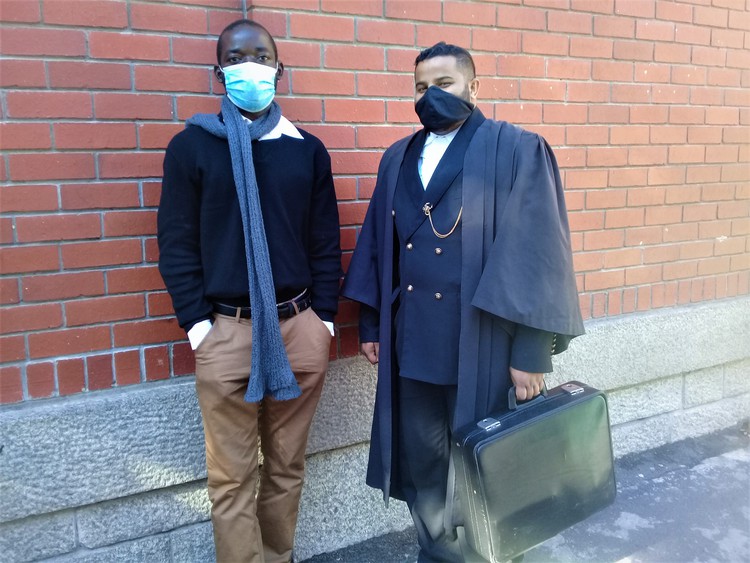 Table Mountain fire accused, Frederick Mhangazo, and his lawyer Shaun Balram outside of the Cape Town Magistrates Court on Friday. Balram said that they are hoping the case will be finalised by the next hearing on 2 July. Photo: Marecia Damons

The case against the man accused of starting the Table Mountain fire in April was postponed for further investigation in the Cape Town Magistrates Court on Friday.

Should the hearing against 35-year-old Frederick Mhangazo, 35, be postponed yet again by the state at his appearance next month, his pro bono lawyer, Shaun Balram, says he’ll have no choice but to request that the matter be removed from the court’s roll.

Mhangazo was arrested in the vicinity of Devil’s Peak on Sunday 18 April, hours after a blaze had already begun spreading on Table Mountain. Mhangazo, a Tanzanian national, is currently living at Our House, which is a safe haven for homeless people in the city.

He first appeared in court on 20 April, where he faced charges of arson. At his second court appearance on 28 April, the charges were changed and he was granted bail of R500 for breaching a by-law under the National and Environmental Management Act (NEMA).

On Friday, the prosecutor said the state was still gathering witness statements and asked for more time to conduct further investigations. To which Balram objected, arguing that the state was given enough time to complete its investigation. “We feel that it is infringing on our client’s right to a speedy and fair trial by [the state] being awarded postponement upon postponement and not coming back with results from that postponement,” said Balram.

“Should it (the investigation) not be [completed], we will object and ask for the matter to be removed from the court roll as the state would have been given more than reasonable opportunity to investigate and have their house in order,” said Balram.

The magistrate granted the state’s request and said another postponement will not be given at the next hearing on 2 July. Mhangazo’s bail was extended.

Outside court, Mhangazo said he was happy that the case is drawing to a close, and that he is hopeful for a positive outcome.

The matter will continue on 2 July.

Next:  Immigrant shop owners plead to be allowed to continue trading in Diepkloof