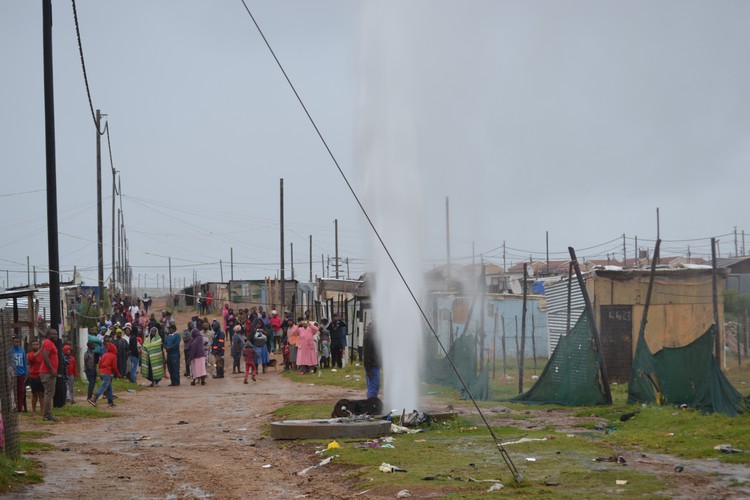 Residents fled their shacks in NU29, Motherwell, as water spouted from the ground from about 2am on Friday. Photo: Thamsanqa Mbovane

As early as 2am on Friday morning, water spouted sky high from an open drain in NU29 in Motherwell, Gqeberha (Port Elizabeth). Ten terrified families fled their shacks. About 20 other shacks were flooded with residents’ furniture drenched.

By 11am, the problem was still not fixed. Municipal workers at the scene promised to fix the burst within four hours.

A police van arrived and police told children to stop playing in that water “or we will arrest you”.

Resident Sibongiseni Ngqungqumba said, “The municipal workers arrived at about 7am and took pictures and left us without saying when they will fix this.”

“When I woke up I thought it was raining heavily but as I went outside, I saw the water burst which looked like a tornado.”

Vuyisile Mpolweni said his food and furniture were soaked and he took his belongings to his neighbour to keep.

Municipal spokesperson Mthubanzi Mniki said, “A valve was removed and stolen from a bulk pipeline. … A team is attending to it. More updates to follow.”

Next:  Mother loses two children and friend in Crossroads fire