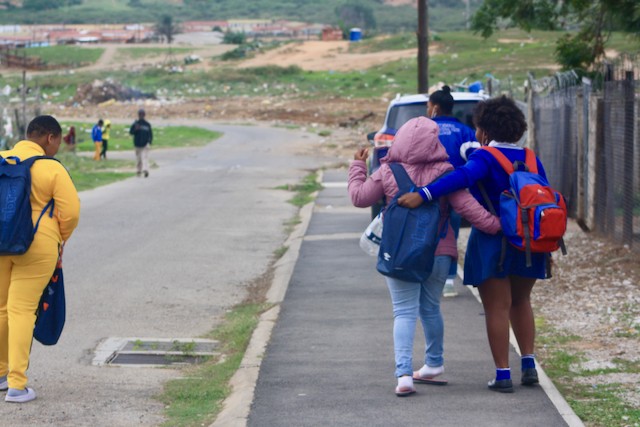 Learners from Mthonjeni Primary School going home at 11am on Friday because their school had no water. Photo: Thamsanqa Mbovane

School learners were sent home at 11am all of last week, due to the deteriorating water situation in the Nelson Mandela Bay Municipality, the Eastern Cape Department of Education confirmed on Friday.

“We can’t keep learners and students in schools where there is no water,” said Malibongwe Mntima, the department’s spokesperson.

“We don’t have a separate water service provider … We pay services to the municipality and we depend on them for water, even for electricity and garbage collection.”

He said schools did have rain tanks but these were also not being refilled.

Learners from primary schools, such as RH Godlo, James Ntungwana, Vuba, Alex Jayiya and Mthonjeni, and from high schools, such as Thanduxolo and Phaphani High in Kariega, could be seen out on the streets before noon.

Luvo Mqingwana, school governing body chairperson at Mthonjeni Primary, said, “We release learners at 11am every day. We are going to communicate with the Department of Education about food that cannot be cooked for learners … due to the crisis. They must make a decision about what we should do about food because it will rot or be misused.”

He said learners could not be kept at school more than three hours without working toilets or water.

“We will have a general meeting with parents next Tuesday, because they are surprised to see their children going home early,” he said.

“We encourage schools through their infrastructure planning to include water-wise and water-harvesting strategies to cushion themselves against the water crisis.”

“We are also calling on all residents, especially at schools, to report water leaks happening to the school management and to use the little available water sparingly. Schools are identified as one of the culprits in terms of high water usage and waste through leaks,” he said.

Previous:  Zimbabweans live in fear of vigilantes in Diepsloot