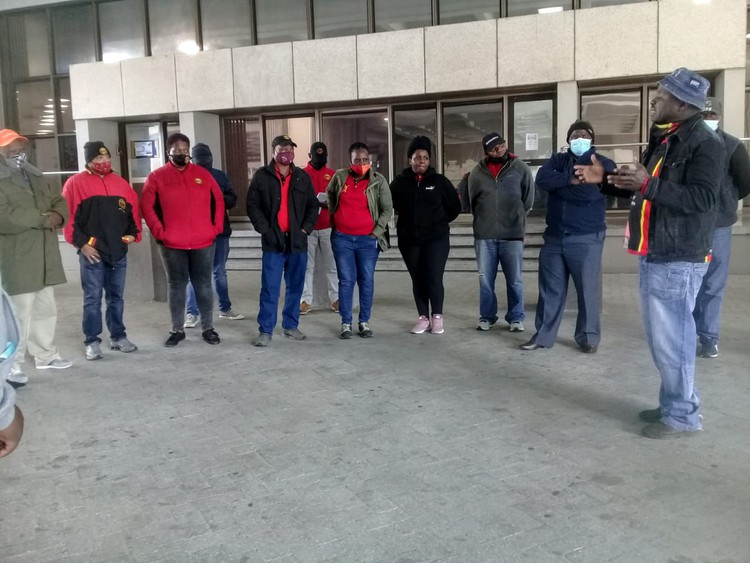 A small group of SAMWU members marched to the Civic Centre on Saturday. According to a statement, the march comes after a recent SAMWU council meeting where members gave “numerous examples” of “unnecessary attacks on shop stewards in the form of warnings and disciplinary steps” by the City.

SAMWU wants the Mayor and the City Manager to investigate several allegations of abuse and discrimination including a case where a female shop steward in Wynberg was allegedly locked up for two hours in her manager’s office, a senior law enforcement officer in Mitchells Plain who was allegedly selling confiscated items; and an incident where a shop steward was allegedly manhandled by security on the instruction of management.

SAMWU secretary Mikel Khumalo said, “The City has not transformed because we are sitting with issues of racial discrimination where workers are treated differently at the workplace based on the colour of their skin.

Regional SAMWU chairperson Mzoxolo Miselo, said that the number of shop stewards facing disciplinary action was increasing, with more than ten of them facing charges of gross misconduct and insubordination.

The memorandum was received by a City official. The City was given seven days to respond to SAMWU’s demands. The City did not respond to our request for comment by the time of publication.

Next:  Conditions are dreadful at Pietermaritzburg morgue

Previous:  Taxi drivers cause havoc in Nyanga over impounded vehicles