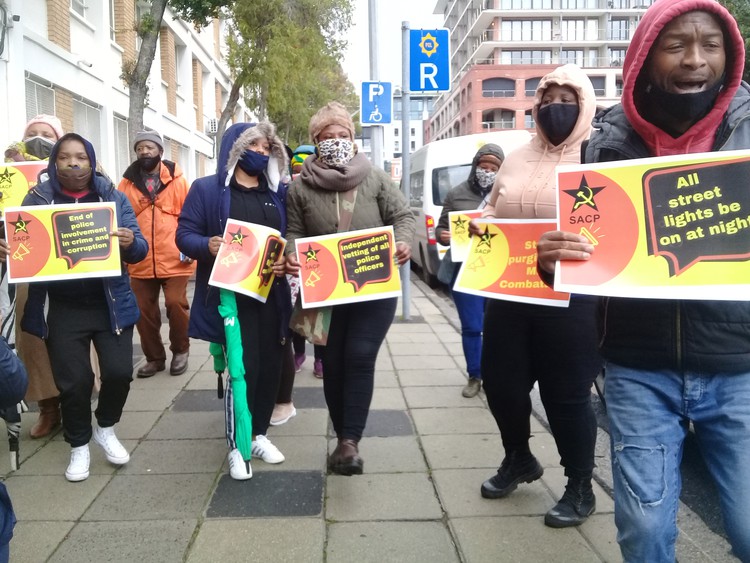 Members of the South African Communist Party picket outside the SAPS Provincial head office in Green Point, Cape Town, on Friday. It was one of several pickets held across the province, calling for an independent investigation into policing as well as the appointment of a permanent provincial police commissioner. Photo: Marecia Damons

Dozens of South African Communist Party (SACP) members staged pickets at police stations across the Western Cape on Friday against the rising crime rates in the province.

They are demanding that police officers be independently vetted of all police; for the immediate appointment of the Provincial Commissioner; and a Judicial Commission of Inquiry into South African Police Service (SAPS) ability to prevent, combat and investigate crime.

Protesters are also calling for the reinstatement of Major-General Jeremy Vearey. He was dismissed in May after he was found guilty of misconduct following disciplinary proceedings over comments he made on his Facebook page about National Police Commissioner General Khehla Sitole.

“Only an ethical and professional police service will be able to rid our communities of criminality,” the SACP memorandum read. “The National Prosecuting Authority and the justice system in terms of its actions is not assisting in some instances,” the memo read.

“For instance, they take forever to prosecute many serious cases, undermining the hard work of some detectives. On the other hand, some criminals guilty of major crimes get released on bail or are granted early parole. As an example, a former top police officer, Christiaan Prinsloo, convicted of gun-running gets early release. What message does this send to corrupt police officers?”

Benson Ngqentsu, SACP Western Cape secretary, said to “get to the bottom of the rot within the police” was urgent.

“Police have become ineffective and people are losing confidence in them. Day in and day out, there are reports of how the police are involved in crime and corruption. Just last week, a police officer was caught stealing bricks from a construction site in Khayelitsha. That’s not the kind of police we want,” he said.

SACP First Deputy Secretary Solly Mapaila said they want police minister Bheki Cele to intervene in areas where communities are forced to live “under the rulership of criminal gangs” who have taken over.

“We have seen gangs just taking over and killing people in large numbers. Gangsters have made Cape Town their haven. Criminals believe that they are superior to police and can do as they please,” he said.

Mapaila said an investigation was needed into how police conduct cases. “Several cases, even when there are leads, stay being ‘investigated’ for too long. For example, our district secretary of this region, Siya Siswana, was killed last year. There were immediate leads provided to the police but to date the case has gone nearly cold. We don’t understand why when evidence is available action is not being taken,” he said.

Mapaila said a lack of street lighting in townships helped fuel crime. According to Mapaila, the SACP had previously requested SAPS to increase patrols in vulnerable communities, but they were often met with excuses, one of which was that the areas are too dark to patrol adequately.

Morris promised that their concerns will be addressed once Plato has distributed it to the relevant officials.

Previous:  Anger over exclusion of ECD centres from teacher vaccinations