“The roaming pigs come and eat our poo” 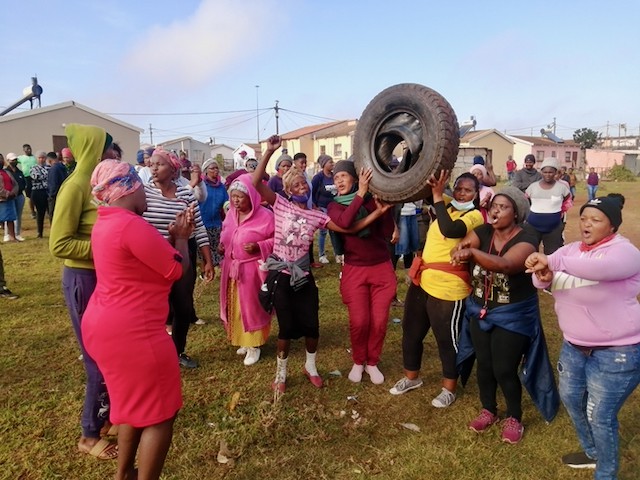 Joe Slovo extension residents threatened on Thursday morning to go back to the streets if their petition is not answered. Photo: Mkhuseli Sizani

Some were dressed in their night gowns. From as early as 3am they came. On Thursday morning, about 400 Nelson Mandela Bay residents closed the R75 Uitenhage Road and Mission Road with burning tyres and rocks. Some live in informal settlements, others in RDP houses. They all want to have electricity, water and sanitation. They are fed up that municipal officials have not responded to a petition they submitted on 8 April.

They also want the Housing Development Agency (HDA) to be removed from building RDP houses in ward 41 where they come from.

The residents have accused ward councillor Simphiwe Tyukana (ANC) of failing to get them basic services.

Public Order Police dispersed the protesters with rubber bullets at 8am and opened the road.

The protest was organised by residents of about a dozen settlements. Ward 41 is one of the biggest wards, where the municipality has been relocating people, many of them destitute and elderly, from wetlands across the municipality.

Monwabisi Yani, a community leader, explained that on 8 April they had handed a petition to City Council Speaker Jonathan Lawack. “We gave him seven days to respond, but until now we have not heard from him or the relevant departments.”

“These police just arrived and shoot at us without asking any questions. We are not going back home until we get answers.”

He said that since 2006 there have been problems with incomplete, poorly built, or “invaded” RDP houses. “We want the municipality to take over the construction of these houses because HDA is not being held accountable for all these failed projects,” he said.

He described Tyukana as “useless”. “He must step down.”

Bongani Barayi, a community leader of Joe Slovo extension informal settlement, said his settlement has four chemical toilets and two broken standpipes. “We relieve ourselves in nearby bushes and empty paint buckets because these toilets are not enough. The roaming pigs come and eat our poo. The streets are muddy and our areas are overcrowded. All these informal settlements make use of illegal electricity connections that have claimed many lives, especially children.”

“We know that we cannot get all of these services overnight. But we demand to be registered on the municipal database in order to be considered when … budgets are allocated,” he said.

A common accusation against Tyukana is that he has not organised meetings to discuss the Integrated Development Plan for his area, which protesters believe is key to fixing the problems.

But Tyukana dismissed the accusations against him. “Integrated Development Plan meetings are called by the municipality, not by ward councillors … The last one was in George Botha in KwaNoxolo township on Tuesday evening.”

He said that he had warned residents in 2017 against occupying land because it was marked for a shopping centre and no development would take place on it. He said that a “verification process” was underway in the ward to identify the “rightful beneficiaries” of about 8,000 houses.

Meanwhile Lawack said it was difficult to deal with petitions from multiple groups all claiming to represent the same community. “A ward councillor should be a starting point and centre of information,” he said.

“This office does not respond to petitions. But we have dealt with this problem … Our Rapid Response Task Team coordinator met with that community. A consolidated report has been compiled and sent to relevant department officials.” He said that Mayco members had visited the informal settlements in March to see what more could be done for them.