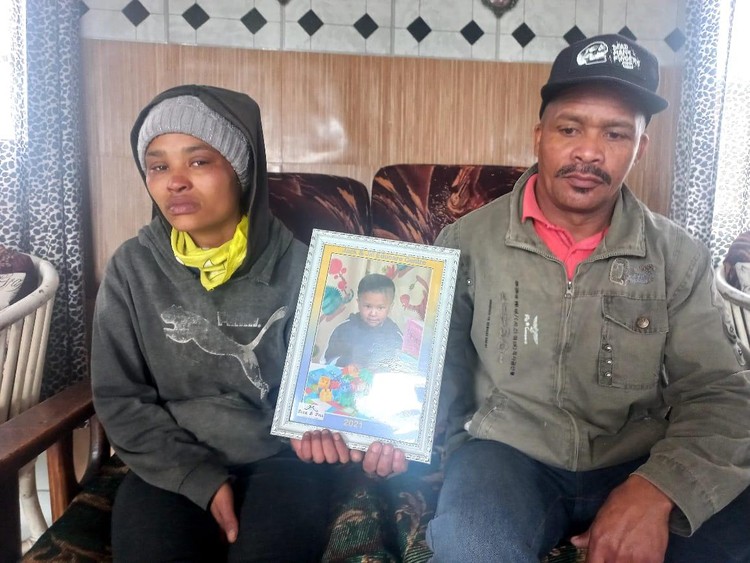 Mother Jayden Jacobs, and grandfather Bradwell Moos with the photograph of five-year-old Bradlin Jacobs who died after being electrocuted by a vandalised electrical box at stadium near his home in Kranshoek, Plettenberg Bay. Photo: Siphokazi Mnyobe

A day of celebration ended in sadness for the Jacobs family from Kranshoek in Plettenberg Bay after five-year-old Bradlin died when he was electrocuted while playing with friends on Saturday.

The Jacobs family are accusing officials at the Bitou Municipality of negligence for not fixing vandalised cables at the local stadium. The family say Bradlin was attending a Heritage Day soccer tournament with his mother Jayden Jacobs.

Jacobs said they went to the toilet and Bradlin asked if he could play with his friends on the stadium grounds. She said she was startled when minutes later she heard people screaming for her to go inside the stadium. She found her son’s lifeless body on the ground. “He is my only child and everything I did was for him,” said Jacobs.

Bradlin’s grandfather, Bradwell Moos, said he rushed to the stadium which is five minutes from their home. “When I got there my grandson’s feet were warm. Some people performed CPR but he didn’t wake up.” Moss said Bradlin was rushed to hospital but there was nothing doctors could do.

He said they were told that the stadium’s caretakers had alerted the Bitou Municipality that an electrical box had been vandalised and needed repairs. He said he would take the municipality to court. “They must account for the dark cloud they brought to my family,” said Moos.

Ward 7 Councillor, Annelise Olivier, told GroundUp that cables being vandalised is a major problem in the community. She said some areas have been without power for up to a week due to vandalism. Olivier said reporting faults directly to Eskom does not always work immediately.

In a statement on Sunday, Bitou Municipality said officials “regret the fatal electrocution incident in Kranshoek”.

According to the City, initial reports indicate that the electrical box at the Kranshoek Sportsfield was vandalised to allow for unauthorised access to live electricity. “Unfortunately, this is also how the 5-year-old boy gained access even though the municipality’s padlock was still in place.”

Municipal spokesperson Andile Namntu said the councillor and deputy mayor and Speaker visited the family on Monday. Namntu said that the City could not comment on the family’s threat of legal action.

Southern Cape police spokesperson, Captain Malcolm Pojie, said an inquest docket had been opened. “Preliminary reports indicate that the mother and child went to the bathroom on the local sports ground. While the mother was in the bathroom, another person alerted her that her child was laying on the ground outside. Reports suggest that the boy was electrocuted by the electric power box on the sports field near the entrance,” said Pojie.

Jacobs said she would never recover from his death. “My boy was cheerful, vibrant with a loud laugh. He was the life of the party and a good boy who loved school,” said Jacobs. Bradlin was in grade R at Kranshoek primary school.

The Jacobs family is waiting for the forensics report and plans to bury Bradlin next Saturday.

Next:  Bleak future for Zimbabwean families depending on breadwinners in South Africa