90% of South Africa’s waste is not recycled

Each year, South Africans produce about 40 million tonnes of general waste, only 10% of which is recycled, according to the State of Waste Report published by the Department of Environmental Affairs in 2018. The other 90% ends up in landfills or waste storage facilities around the country. But what happens to the 10% of materials that have a second, third, or even a fourth chance at life?

The South African government lagged behind many countries in implementing public recycling programmes, with its pilot project in 2004 in Cape Town. Only in 2006 did public recycling come to Gauteng and KwaZulu-Natal, and then slowly spread to the rest of the country.

Many rural South Africans are still without access to public recycling, but engage in informal recycling, such as waste picking, at much higher rates than urban residents.

So after a quick deliberation, you’ve made the choice to throw that plastic bottle into the recycling bin instead of the rubbish bin. You walk away feeling good about your decision, but what happens to the bottle after it has entered into the long and winding chain of the City of Cape Town’s public recycling programme?

It will start the process in one of the City’s 26 public recycling drop-offs, dispersed throughout the Cape Metropolitan Area.

“People tend to associate places like this with a dump,” said Dexter Bruce of Lardex Trading, a waste management contractor. “This is not a dump. This is a friendly place, a neighbourly place. We know our customers here.”

Bruce is the manager of the Sea Point drop-off site. He proudly showed GroundUp his facility, pointing out his two employees, Joseph Shawa and Fabrice Ndegeya. “They’re the most important people in this entire industry,” said Bruce. “They make sure nothing gets through the first stages that could cause problems down the line.”

Ndegeya and Shawa comb through the loads of material dropped off by residents, businesses and public garbage trucks, and sort it into paper, plastic and glass. Then the loads are what Bruce calls “purified” by the removal of items that cannot be recycled, like styrofoam, or electronics containing heavy metals.

The plastics are then separated into categories such as clear plastic, green plastic, soft plastic and ‘sticky’ plastic that has been stained by food or dirt. The materials are crushed with hydraulic press machines and made into bales nearly two metres across.

The bales are loaded onto trucks and transported to washing facilities, which the City’s Head of Waste Minimisation Alison Davison calls “the bread and butter of South African recycling”.

Davison says there are two processes for washing recycled materials. “Virgin” plastics – plastic that has not yet been recycled – undergo a simple process called de-dusting to prepare them for the next stage. Virgin plastics are usually denoted by a symbol printed on the product itself, but Davison notes the markings can be inconsistent.

If a material has been recycled, it is sent to a different facility, where it is spun rapidly in circles in a centrifuge, then soaked in cleansing chemicals.

Both facilities break down the material into tiny pellets after the initial cleaning. The pellets are then steam-cleaned to become the building blocks of new plastics.

“Think about the pellets as the atoms of the recycling world,” said Bruce. “The plastics industry can make just about anything out of the pellets these days. Bottles, broom handles, toothbrushes, toilet paper.”

Glass, he says, is the only material that does not lose some mass during the recycling process.

“It is a huge boost for business in this country,” he said, “and it adds value to the supply chain. We are just keeping in the system things that would normally be left for garbage.”

South Africa is unusual in its ability to sell materials discarded within the country to manufacturers that are also based here. In Europe and North America much plastic rubbish is exported to poorer countries, but in Cape Town the bottle that you recycled this morning might be made into the very one you buy next month.

“We like to think of this as ever-growing,” said Davison. “We have goals to increase interest, engagement and activism around reducing waste. We have come a long way in 15 years, but we have a lot of work ahead of us.”

Beginning in 2012, the City started to hold competitions between the public drop-offs, rewarding the best decorated sites. Many of the materials brought there that cannot be recycled are used as decorations like pot for plants, chairs, sculptures or wall art. The entrance to the Sea Point site is surrounded with brightly coloured trinkets and art pieces made from old, once-abandoned things.

“I do think it’s beautiful, the way they have saved these things from a landfill and made them into something so lovely to look at,” said Davison. 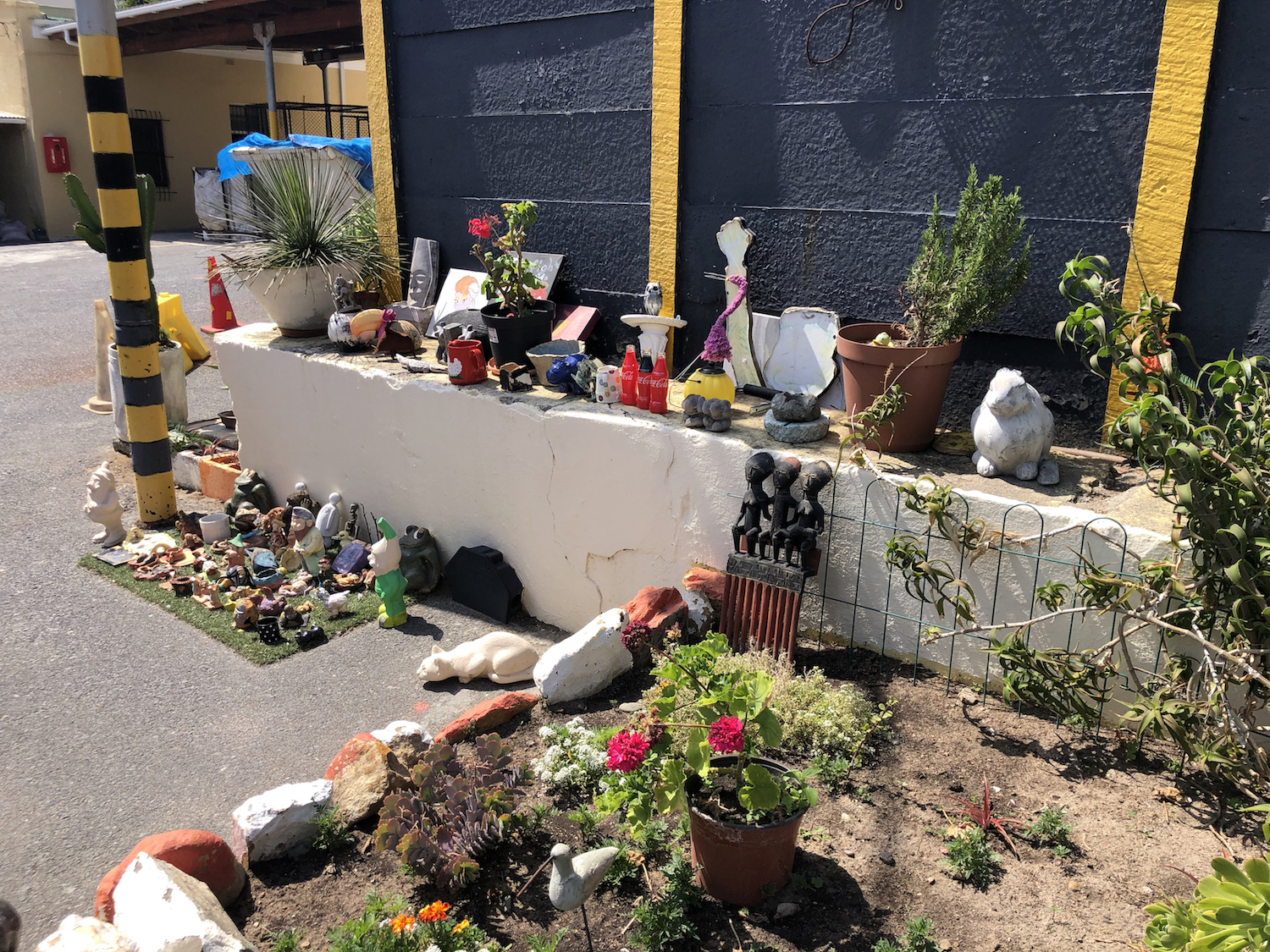 The entrance to the Sea Point site has been decorated with discarded items. Photo: Drew Wayland

The City, and much of South Africa, is fighting an ongoing battle with rampant illegal dumping, particularly in waterways.

“We want to curb that as much as we can by making this a place that is easy to get to and nice to be in,” said Bruce, “especially among young people.” Bruce and Davison agreed that the younger generations are the most vocal about environmental issues, but the least engaged in personal recycling.

“Most of my regular customers are older people,” said Bruce.

Despite some challenges, the City claims that public recycling programmes in Cape Town have processed more than 589,000 tons of plastic since their start in 2004.

“More important than all of this is to reduce your waste,” Bruce reminds his customers on their way out of the gate. “Recycling saves money and saves waste, but one day the goal is still to have less of it to do.”

Next:  The grim life of a Philippi farm worker

Previous:  “We do not have streets, but during elections you will find big black cars driving between our shacks”