Pit latrines are a daily hazard in Eastern Cape schools 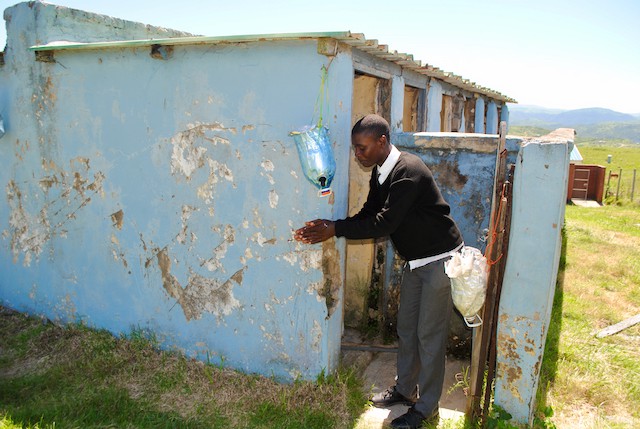 Flies buzz and a smell of excrement hangs about Mtakatye and Lwandile junior secondary schools in Ngqeleni. This is because learners have been forced to relieve themselves in open fields as neither school has safe toilets.

Mvelelo Bumazela, the principal of Mtakatye in Mamolweni Village, says when he was appointed principal in 2017, construction of a new school block with ten flush toilets had not been completed and the new toilets were being used for storage.

He said he had written several times to the Eastern Cape Education Department and asked for the construction to be completed, “but I never received assistance”.

Bumazela said the school doesn’t have money for a “honey sucker” to clear the pit latrines. The old pit latrines are subsiding and unsafe.

The school has 464 learners who share the 12 pit latrines with teachers.

Xoliswa Mhlaba, a departmental head at the school who also arrived in 2017, said the stench at the toilet block “makes me sick”.

The school fence is broken and stray dogs scare the children. There is no access control and the principal worries that children will wander down to the sea, to nearby Presley Bay.

There are four water tanks, but only one 5,000 litre tank is operating. Learners have to wash their hands from water-filled, old wine box foil bags (papsaks) filled with water.

Sinawo Mkhamndeli, a 17-year-old grade 8 learner, said, “When you return to class other learners can easily tell that you came from the toilet because the smell of the poo remains on your clothes.”

“The state of our toilets is terrible. They stink and are very deep. The walls and roofs shake on windy days. The doors are broken. Sometimes we find snakes because there is tall grass next to the toilets,” said Mkhamndeli.

School governing body chairperson Mkhombeni Gxutshuza said when they complained to the department about the toilet project being unfinished, they were provided with two mobile toilets, but the department has since taken them back.

Things are as bad at Lwandile Junior Secondary School in Lwandile Village, a kilometre away. The school fence is also broken. The school has 620 learners. They share ten pit latrines with the teachers.

Maliviwe Dayi, a former learner and member of staff at the school, said learners in grades R, 1, 2 and 3 relieve themselves outside because the pit latrines are too dangerous.

“The smell of excrement fills up the nearby classrooms and the kitchen. As you go inside those toilets an unpleasant smell welcomes you and flies are buzzing.”

He said dogs and pigs enter the school yard because the fence is broken. “They are looking for food leftovers from our school nutrition programme. From there they move into the garden and feast on learners’ poo.”

Itumeleng Mothlabane, Equal Education (EE) provincial head of organising, said that it was disappointing that nearly ten years after the minimum norms and standards policy was adopted the education department was still facing sanitation backlogs.

Despite President Cyril Ramaphosa announcing the Sanitation Appropriate for Education initiative in 2018, there has not been a significant improvement, said Mothlabane. “According to the 2021 National Education Infrastructure Management System report there are still 1,473 schools* in the Eastern Cape that have plain pit latrines that need to be replaced, with 944 of those schools having no sanitation facilities besides these illegal plain pit latrines.”

According to Mothlabane, the Department of Education in an online presentation to the Eastern Cape Provincial Legislature Portfolio Committee on Education in May last year, reported that in the current financial year, the department targeted 69 schools for proper sanitation.

“This is a small number … This shows a lack of urgency in eradicating plain pit latrines in the province,” said Mothlabane.

Next:  Traders are selling goods on the railway tracks in Mamelodi