A Philippi woman lost her eye when police fired into her yard. Seven months later, no one held responsible

Siyasanga Gijana believes IPID is not serious about finding the culprits 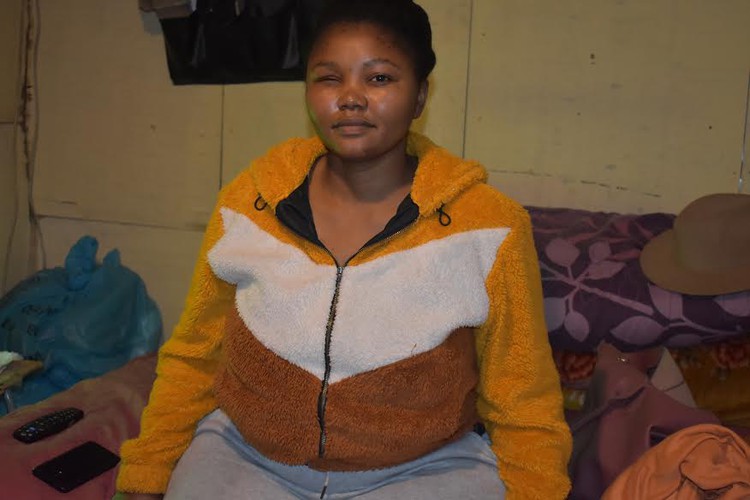 Siyasanga Gijana from Philippi lost her eye nearly seven months ago after police officers fired into her yard. She believes the Independent Police Investigative Directorate is not taking the case seriously. Photo: Buziwe Nocuze

Siyasanga Gijana from Ramaphosa informal settlement in Philippi, Cape Town, lost her right eye in April after she was shot by police officers while inside her yard. Nearly seven months later, no one has been arrested and the Independent Police Investigative Directorate (IPID) is still looking into the case.

Gijana says at about 7:30pm on 23 April she was outside her shack getting water. “I heard gunshots while at the tap. I did not know they had shot me until I saw blood coming out of my eye. I screamed for help”. Her neighbour rushed her to the clinic where she was referred to Groote Schuur hospital. Doctors told her that her eye could not be saved.

Gijana laid a complaint at Nyanga police station. The complaint was referred to IPID and she met the investigating officer in Bellville early in May. “We didn’t even talk too long as he asked what happened, after taking the statement he told me to go home, they will investigate and get back to me”. She was called back for a second visit later in May. Since then she has heard nothing, in spite of attempts to follow up.

“I think they are letting this go without even discussing it with me,” she says.

Neighbour Andiswa Njova, who says she witnessed the shooting, says the police officers fired from a police vehicle. “No one knows why they decided to shoot without being provoked or anything. They didn’t even stop the car; they shot her while the car was in motion,” she says

Njova says she was also outside. When she saw police pointing guns in their direction, she ran inside the shack. “While I was still running, gunshots went off. After a few minutes I heard Gijana crying, asking that I must assist her.”

Njova said she has not been interviewed by IPID. “I waited for them to come and ask questions but they never did that and Gijana will never get justice,” she says.

Gijana says the investigating officer told her it would be hard to identify the police officers because their vehicle had no registration number and they were “patrolling randomly”.

Asked to comment, IPID spokesperson Ndileka Cola said the matter was still under investigation. “Suspected members are yet to be identified,” said Cola. Asked why it was taking so long to identify the police officers concerned, she said, “Investigation process takes time and I would like to urge you to please allow the process to unfold and take its course.”

Asked whether there were SAPS cars patrolling in the area on that day, SAPS Western Cape spokesperson Sergeant Noloyiso Rwexana said, “This is an IPID investigation, please forward your inquiry to their spokesperson for comments.”

Asked how many police vehicles the Nyanga police station had, whether any did not have number plates, and what records were kept of police vehicle activity. Rwexana said there were procedures in place to use official vehicles, but the office was not at liberty to share such information with the media.

“Siyasanga is not the only one, there are a lot of people who were abused by police officers,” said Gijana’s uncle, Bahle Mphangeli. “But we will never hear of them being arrested for their actions, that is why they will continue shooting or beating residents up.”

He said he thought IPID was dragging out the investigation deliberately. “They are doing it on purpose, police officers just don’t patrol randomly. Even if that was the case, those who were patrolling in that area that day are known because they signed papers before taking police cars”, said Mphangeli.

“I cannot let them get away with what they did to me,” said Gijana, who is now on painkillers.

Next:  Neighbours in standoff over illegal electrical connections

Previous:  Proposed changes to the way we vote are alarming