Covid-19: “People are going on like there is no crisis” in Masiphumelele

“We are not ignorant as people say. We are forced by our living conditions”

The shebeens and saloons are closed for the Covid-19 lockdown, but otherwise it seems like a normal day in Masiphumelele, Cape Town. The streets are still full of people milling around, children are playing, and some businesses are open.

When a military vehicle accompanied by police vans and metro police cars arrives, some Somali shop owners close their doors, and roadside vendors without permits quickly vanish. Residents watch the police vehicles from their yards and children excitedly follow the convoy.

“They say we are not allowed to sell prepared food, that is why when we see them we go hide,” said a woman who had hidden at a house near her pavement braai stand. She was back in business immediately after the police left.

A barber shop owner, who didn’t want to give his full name, said he has closed his shop but still operates. “I do house calls now, because at the end of the month I have to pay rent where I stay and need to buy bread for my family … I sometimes get two clients or no clients at all a day during this lockdown, whereas before I could do as many as ten people a day.”

“There is no lockdown here. People are going on like there is no crisis. Masiphumelele is the same today as it was before the shutdown,” said Zanyiwe Mavubengwana, a resident and health worker who runs a soup kitchen for children now that schools are closed.

“Our people need to know people affected [with Covid-19] before they take this seriously. It is like if they do not know anyone with it then it doesn’t exist,” she said.

“Do you see how people are just walking around like it’s nothing to them? It’s like a show when the army comes around,” said Mavubengwana.

In some sections, residents are waiting in groups for grocery deliveries from local organisations. There is little attempt at social distancing.

Resident No-Christmas Stibili was one of those hoping for a food parcel. She is unemployed and lives as a backyarder with her two sons. “The was a list going around and we put in our names for groceries. I do not know where it is coming from, but I need the food,” said Stibili.

Mzingisi Mndwayi lives in a two-bedroom shack with three siblings. Since the lockdown, none of them have had any income. He said the lockdown plan was tailored for the rich.

“Lockdown was never going to be perfect in the townships compared to the suburban areas. Our living conditions do not allow us. Imagine being stuck in a two-room shack with four other family members, 24 hours a day,” he said.

“For someone to even take a bath, others have to exit the house. We are not ignorant as people say. We are forced by our living conditions,” said Mndwayi

Community leader Tsepho Moletsana said he was worried about how fast Covid-19 would spread in Masiphumelele.

“The army is also not helpful. They come now and then only to intimidate the community with their guns and then drive out. Then we see them again after a few days,” said Moletsana. 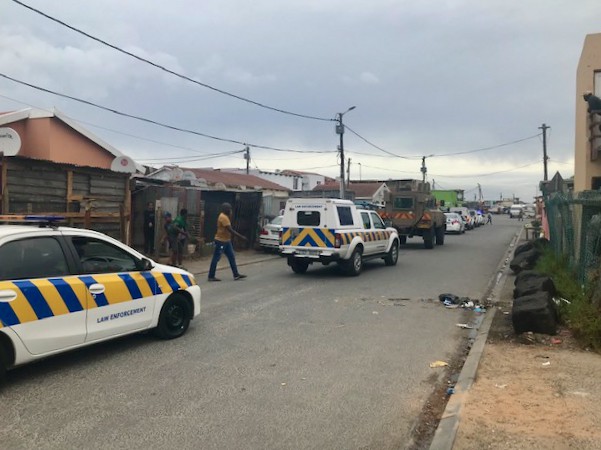 A convoy of metro police cars and a military vehicle patrols a street in Masiphumelele. Photo: Thembela Ntongana

Next:  Covid-19: Prison inmates are in immediate danger

I am curious to know, do people realize that If they die of this virus, who will provide for their children?

Furthermore, bigger companies and some goverment sectors want the lockdown to end, meaning they don't care who dies and how many die?.

So what is more important to people? Because if the lockdown ends now, many will die. Who feeds their children If they die? People are so sure that their children/families will be taken care of .