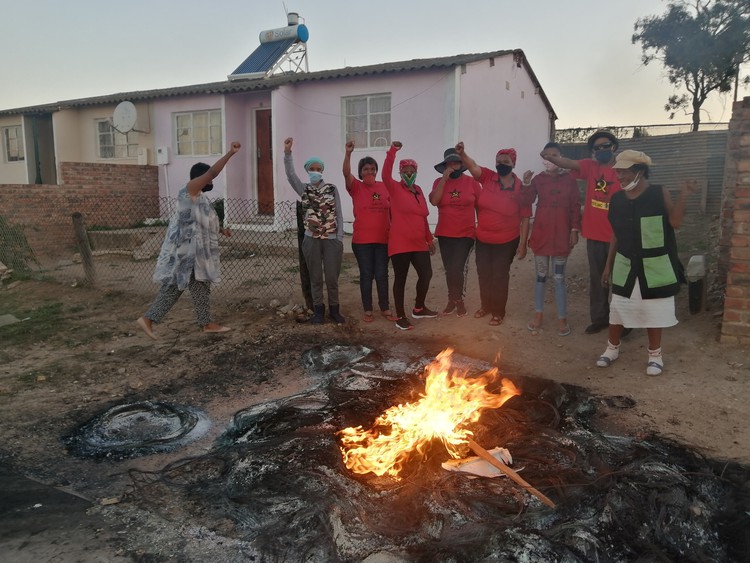 Parents and members of the South African Communist Party protest outside the house of a man who is alleged to have sexually assaulted five children under the age of nine. The man was arrested but the case never made it to court. Photo: Mkhuseli Sizani

Dozens of angry parents and members of the South African Communist Party (SACP) in Arcadia, Port Elizabeth, burnt tyres in front of the home of a man who allegedly sexually assaulted five young children.

According to police spokesperson Colonel Priscilla Naidu, it is alleged that on 12 June, the children aged between four and nine were playing in a neighbour’s yard in Prinsloo Street in Arcadia. “At some point, the 46-year-old accused called the children inside. It is further alleged that he showed pictures of naked women to the children from his cellphone and also touched them inappropriately. The children reported the matter to their parents. Cases of sexual assault and pornography were opened at Bethelsdorp Police Station,” she said.

Naidu said the accused was arrested on 15 June by an investigating officer from the Port Elizabeth Family Violence Child Protection and Sexual Offences Unit. “On Wednesday the case was not placed on the court roll and he was released,” she said.

After seeing the accused back on the streets, the parents on Thursday afternoon expressed their frustration by protesting at the accused’s home, demanding justice for their children. The man was not at home at the time.

Lucy*, the mother of one of children, said, “My daughters said our neighbour forced them to watch a pornographic movie with him. Then he told them that they were family and should practice what they saw on the movie with him. My four-year-old daughter says the suspect touched her private parts while her sister who is six was ordered to strip naked by the suspect.”

The mother said her six-year-old can’t sleep at night and when she does fall asleep, she is awoken by nightmares. “I have to take them for counselling at Dora Nginza Hospital,” she said.

Another parent, Jessica*, said, “My daughter, aged eight, says the suspect stripped her naked and lay on top of her. He told the other three kids to also perform sex. He even forced her to touch his private parts. My sister’s son was also forced to touch this man’s private parts … We trusted this man,” she said.

Felicity Langford, SACP secretary in ward 32, told GroundUp: “It was brought to our attention by the parents … that the suspect was out on bail and bragging on the streets about being a freeman. The parents said the suspect also showed no remorse for his actions. Instead, he walked up and down saying the parents had no evidence against him.”

“We burnt these tyres in front of his home to get the attention of the police. If we had found him in his house we would have necklaced him or chopped off his private parts. He must be kept in custody as an awaiting trial or we will spill his blood. We cannot allow our kids to live in fear,” said Langford.

Anelisa Ngcakani, regional NPA spokesperson, confirmed that the case had not made it to the court’s roll “as there were still many gaps in the information gathered at the time of the arrest”.

“We are always careful to act and take up matters prematurely and lose them. That will further prejudice the victims,” she said.

*Names have been changed

Next:  Nurses picket over staff shortages at False Bay Hospital