Over 20 learners injured as taxi crashes into barrier at Parliament 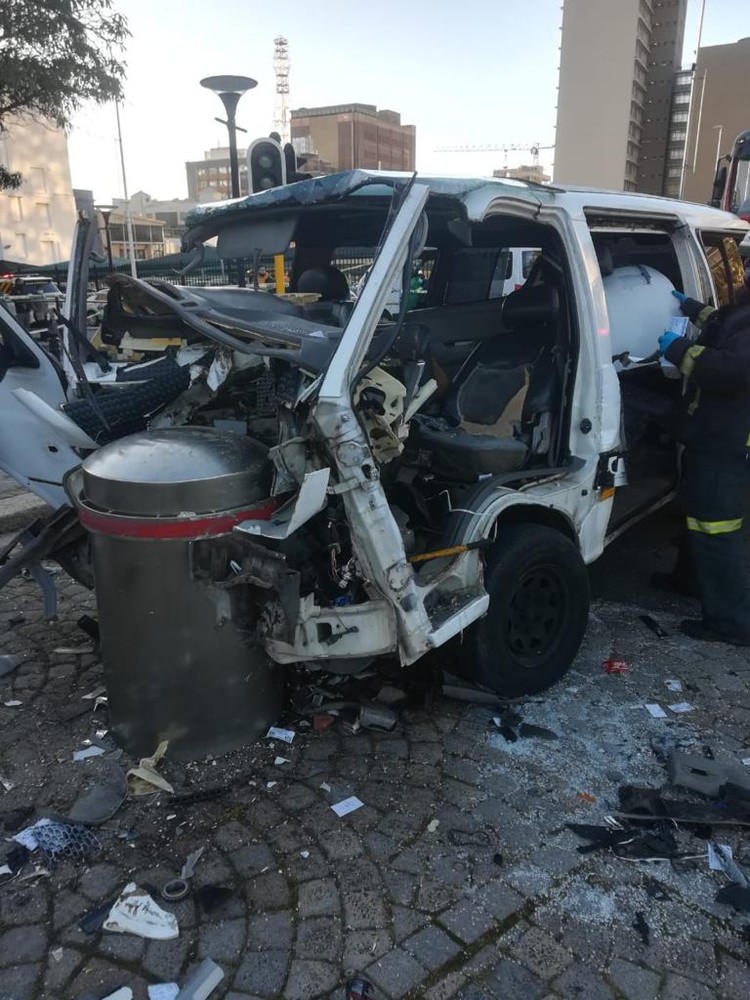 A minibus taxi carrying over 20 school children crashed into the bollards of Parliament on Friday morning. Photo supplied by City of Cape Town

More than 20 school learners were injured when a minibus taxi collided with the bollards at the Plein Street gates of Parliament in Cape Town on Friday morning, police spokesperson Colonel Andre Traut has confirmed.

A case of reckless and/or negligent driving has been opened, said Traut.

Parliament issued a statement on Friday, led by the Speaker of the National Assembly Nosiviwe Mapisa-Nqakula and the Chairperson of the National Council of Provinces Amos Masondo, conveying condolences to the family and friends, saying one school pupil had died.

But according to Kerry Mauchline of the Western Cape Education Department on Friday afternoon no deaths have been reported.

Western Cape Education Minister Debbie Schäfer said the learners are reportedly from 12 different schools, most within the city bowl and Walmer Estate area. Their ages range from six to 14 years.

“I am deeply distressed by [the] incident that happened outside Parliament this morning involving learners on their way to school. The injuries of the learners range from serious to minor, with learners being sent to Red Cross Hospital, Somerset Hospital, Green Point Clinic and District 6 clinic,” said Schäfer.

Nomthandazo Zweni, Holy Cross Primary school principal, said that four of the learners involved in the accident attended the school. The injured were at the Red Cross Children’s Hospital in Rondebosch. They are in grades one, two, five and seven.

One of them had minor injuries; the other three were seriously injured with broken legs, said Zweni.

She said the learners said they were overcrowded in the taxi. “It’s a 14-seater taxi, 15 with the driver,” she said.

According to Zweni, one of the learners involved in the accident told her that the taxi’s brakes had failed.

She said this was the second school transport-related accident this year, involving learners from Holy Cross Primary. “Two weeks back there was another accident where the children had minor injuries. It was also in a taxi,” said Zweni.

She said in 2018, a grade one learner, Liyabona Mbaba, died in an accident when a taxi transporting school learners crashed into a barrier on the N2. The Liyabona Library at Holy Cross was named in honour of seven-year-old Mbaba.

“The problem is that there isn’t a bus assigned to specific schools,” said Zweni. “So all these children are being transported with one vehicle to the different schools.”

Nadiem Dollie, acting foundation phase department head at Holy Cross Primary, said he and Zweni were the first school staff to arrive at the scene shortly after the accident.

“When we arrived, there were about five ambulances, a fire truck, policemen, and it was taped up. There were people everywhere staring. The taxi was completely rammed. It was very traumatizing to see,” said Dollie.

He said that he and Zweni identified the learners by their school uniforms, and then contacted the affected schools, district managers, circuit managers and councillors.

“We informed who we had to. We also asked the learners which schools they attended and we immediately informed our secretary to inform the schools that their learners were involved in the accident,” said Dollie.

She said that two were being treated at District Six community health centre, while one learner, who was more seriously injured, was taken to New Somerset Hospital.

“I just arrived at school when I got the news and had to rush out,” said Kellerman.

“I had so much anxiety. I was alerted by one of the principals at the scene that some of my learners were involved in the accident. I was quite fearful not knowing the extent of the injuries and whether there were any fatalities. When I saw the taxi and what it looked like, I had a huge shock because of how bad it looked.

“I wondered, where are my children if the taxi looks like this?” she said.

Kellerman, who had visited the learners and their parents at hospital, said the learners mostly suffered injuries to their legs and arms.

Zweni said they are urging parents to do the necessary due diligence when arranging school transport for their children.

“Parents need to check on these taxis when they sign up contracts. We as schools, don’t see any drivers coming into school to check if they have the proper documentation. We don’t sign any contracts, it’s only the parents.”

She said, “It would be very helpful if they could have safe and designated school transport where the drivers are trained.”

“Our learners’ lives matter. Their safety matters. This kind of reckless and irresponsible behaviour by the driver and/or owners of this vehicle must not go unpunished,” she said.

Schäfer said that the parents of the learners are being notified and that the department’s support team is on standby for assistance for counselling and psychological support.