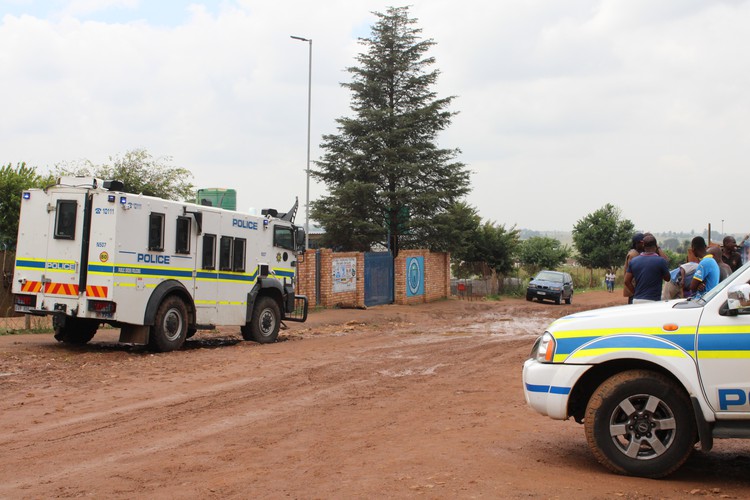 Police remained outside Duzenendlela Special School in Tjovitjo in Organge Farm, Johannesburg on Friday. Community members have been protesting outside the school, demanding that it be converted to a mainstream school so their children will no longer have to cross the highway to get to school. Photo: Masego Mafata

Duzenendlela is one of two special-needs schools in Orange Farm, according to the Department of Basic Education’s list of special-needs public schools.

Some residents have been protesting outside the school in Tjovitjo since Wednesday, blocking access to the school. The school was forced to open a day later than other schools in the province.

“We are demanding that this school be changed into a mainstream school because children from Tjovitjo are made to cross busy roads like the Golden Highway to access schooling. Some parents are forking out a lot of money for transport to schools in neighbouring communities,” said Sibonelo Zuma, a Tjovitjo resident. The informal settlement is next to the highway.

According to Zuma, community members approached the school in September last year to find out whether it could become a mainstream school. He said the school referred him to the education department, who “never fulfilled their promise to respond to our request”.

Zuma said the group then decided that the school won’t open until they got a response. On Wednesday they locked the gates of the school. The school only reopened on Thursday once the police had arrived. Zuma acknowledged that when the informal settlement was formed in 2017, the school was already in existence.

Audrey Manaka, a Tjovitjo resident and parent of a nine-year-old with special needs, claimed that the school did not accept children from the community with special needs. “I have tried to enroll my child without success,” she said. Manaka said she has tried the district office and other schools for learners with special needs but is yet to find a place for her child.

On Friday morning, there was a group of about 15 people outside the school. Three police cars and a nyala guarded the school to ensure that there were no disturbances.

A school bus driver outside told GroundUp that he was concerned that the situation would escalate once police left. “When we arrived to drop the learners off this morning, we noticed that one of the school’s kitchen windows was broken,” he said

The driver, who asked not to be named, recalled how he was blocked and threatened by community members from dropping the learners off at school. “Some of the learners were quite scared,” he said.

In a statement, MEC for Education Panyaza Lesufi condemned disruptions to activities at the school. He said the department planned to open more schools for learners with special needs to reduce the waiting list. “It is unfair for people to disrupt such a school and even go to an extent of demanding that it must be changed to a mainstream school. The community should be calling for the opening of more such schools,” said Lesufi.

Next:  Memorial held for Dumisani Joxo who was killed, allegedly by a Cape Town officer