One dead and over 80 homeless after Strand fire

One person died in a shack fire on Monday morning at Happy Rest Informal settlement in Nomzamo, Strand, Cape Town. The fire which started after midnight, left 88 people homeless after their 47 homes were destroyed.

Jermaine Carelse of the City’s Fire and Rescue Services said firefighters responded to the fire at about 0:40am. It took four hours and 31 staff to extinguish the blaze.

While clearing the debris, firefighters found a body. The sex and age of the person could not be identified. A firefighter also suffered from smoke inhalation and received medical treatment.

Father of two, Vusumzi Olayi, said he could not save anything as the fire started next to his shack. “I heard screams from a neighbour. I took my wife and kids to safety. My kids will walk barefoot to school. Their clothes were inside the house.”

My kids will walk barefoot to school.

Residents suspect that a candle might have caused the fire. This is despite the fact that the area has had electricity since 2010.

People who are possibly related to the dead person said they cannot comment as they have not received confirmation that indeed it was their relative. “My brother was out drinking with his friends. He is not back yet. We do not know if the body belongs to him,” said a woman.

59-year-old David Mlangeni did not only lose his house but also his business. His car which he used as a delivery van caught alight. “I had to ensure the safety of my family and by the time I thought about my car keys, it was too late. I work as a delivery person and I was using my own car. I have lost it all now. I do not know how I will resume work.”

In another fire in Langa, 31 shacks were destroyed leaving 76 people homeless. Carelse said there were no injuries in the second fire. 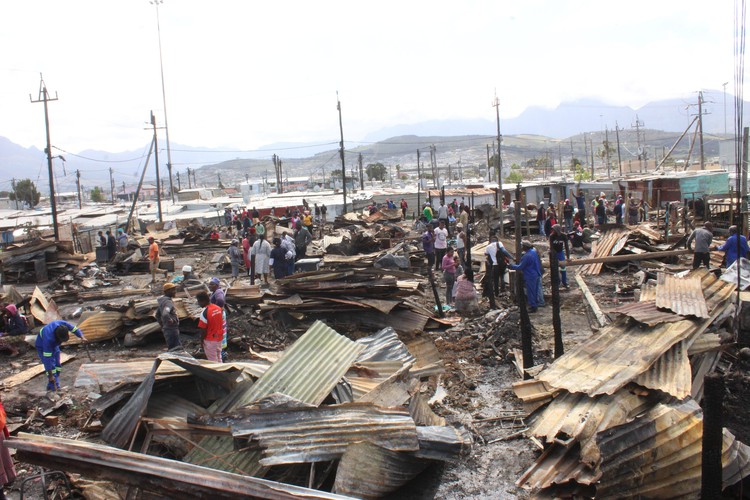 Next:  Satire and the City: Zombies and a dead president protest in Cape Town