Not much sign of “houses, security and comfort” where the Freedom Charter was signed 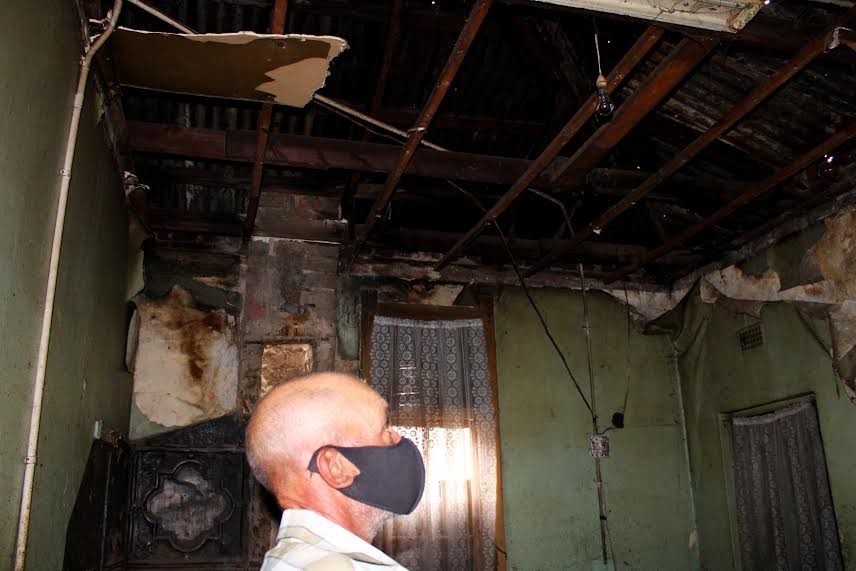 Marcus Antonio, a long time Kliptown resident, says it pains him to see how Kliptown and its people have been forgotten by the government. Water leaks have eroded the walls of his kitchen. Photos: Masego Mafata

“There shall be houses, security and comfort”. This is the promise of the Freedom Charter adopted in 1955 in Kliptown, Soweto. But many of the families living in Kliptown today are still waiting.

The Charter, signed at what is now called Walter Sisulu Square in Kliptown, Soweto, served as the bedrock of South Africa’s Bill of Rights. Today, well-maintained rental flats near Walter Sisulu Square and Kliptown Taxi Rank may suggest that calls to demolish “slums” and ensure access to “decent housing”, as stated in the Charter, have been heeded. But behind the Square are old, crumbling houses, congested informal settlements and dilapidated roads. The shops next to the taxi rank are empty following the looting in July last year.

Some of the more than ten informal settlements have been named after struggle icons, including Winnie Mandela and Chris Hani. Residents say that apart from Walter Sisulu Square – declared a national heritage site in 2019 – these names are the only memory of the township’s role in the struggle against apartheid.

One of the oldest townships in Johannesburg, Kliptown has existed since the early 1900s. Long time resident Johannes Turner says many of the remaining houses in the old or “original” part of Kliptown (ward 17), a stone’s throw from the Square, are almost as old as the township itself.

Turner, 71, has lived in a modest two-room house in Kliptown since 1974. He lives with his 60-year-old wife Dinah, and their four grandchildren. The pensioners said they rely on their old age grants to support their family.

The house has holes in the roof and cracked walls. One of the walls is leaning and the house is “no longer stable”, they say. 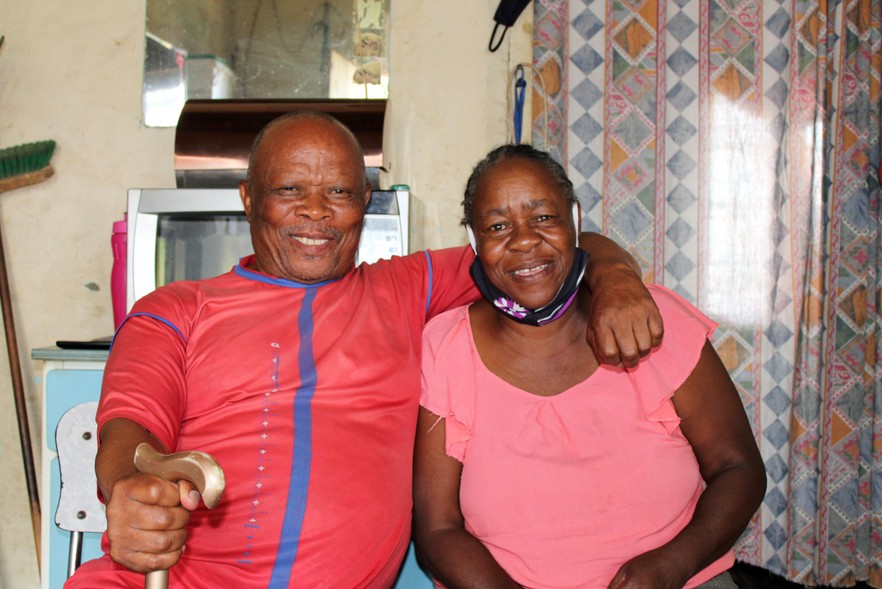 A failure to maintain drains in the township leads to regular flooding during the rainy season. When it rains, the Turners’ house floods, forcing them to all squeeze onto a double bed to avoid the water, says Dinah Turner.

“It is only God’s grace that is keeping this house together. My plea is for my family to live in a proper house.” This has been the community’s plea for years, she says.

Johannes says that he and Dinah have been on the housing list since 1996. He says he has watched as RDP houses and flats shot up near the Kliptown Train Station and Walter Sisulu Square, hoping to receive the house he has been promised.

“A lot of promises have been made but we have never seen those promises become a reality,” Turner says. 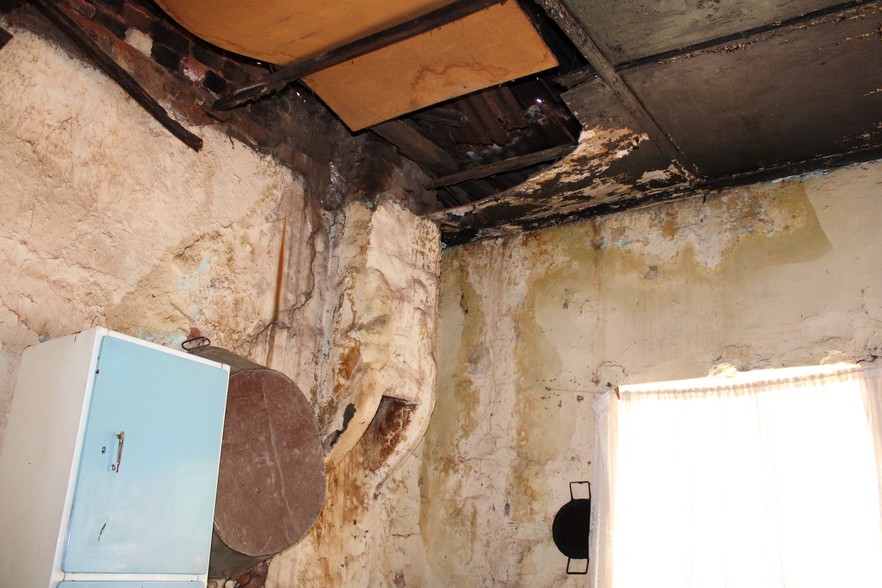 The Turners have tried to patch up holes in their roof but the water still finds its way into their house.

The houses have cracked and crumbling walls. Many residents have patched up holes in roofs and walls using corrugated metal sheets.

Marcus Antonio, another Kliptown resident, says if he had a job, he would repair his broken roof. “I don’t work, so I can’t afford to fix it,” he says.

Antonio, who was born and bred in Kliptown, says poverty and unemployment are rife in the township. He is a trained mechanic who survives on “a pittance from odd jobs”.

Apart from the Square, says Dinah Turner, there has been little development of the old Kliptown in the 70 years since the Charter was adopted, and the 28 years since the dawn of democracy.

“We don’t have flushing toilets, some households don’t have electricity, yet we were promised a better life,” she says. Those who can afford to, have installed their own flush toilets in their houses, but most residents rely on the hundreds of chemical toilets in the area. About eight or nine households share a single toilet, says Dinah.

There are few resources and opportunities for people in Kliptown, she says. There are no libraries or playgrounds for children. 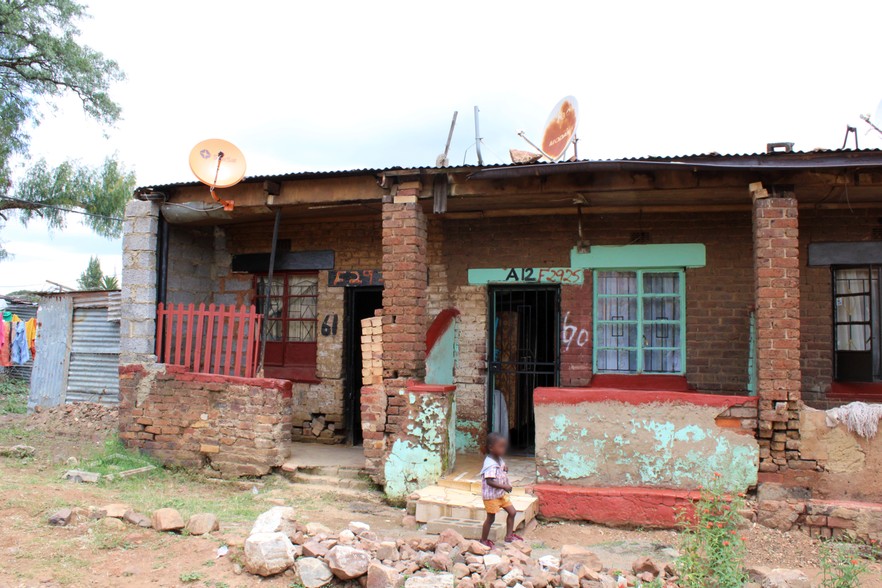 Those who can afford to, shore up their crumbling houses with bricks and stones.

Community leader Caleb Woodworth says he is looking for sponsors to help him build a netball court. “You have children playing in the streets, which is not safe.”

Woodworth says the township has been “forgotten” by the government. “If we want anything to happen in Kliptown, we are forced to make it happen ourselves,” he says.

Responding to questions sent by GroundUp, the City of Johannesburg said the housing backlog in Kliptown was being addressed through the Sector 2 project, for which the Gauteng Provincial Government was the implementing agent.

The City said its Housing Department “remains committed to reducing the backlog” and has allocated R21.7-million in the 2022/23 budget to the Kliptown Urban Renewal Programme.

Asked what measures had been put in place to tackle flooding during heavy rains, the City said the Johannesburg Roads Agency’s teams maintained and cleared drains in the ward 17 areas including Kliptown and Eldorado Park. A stormwater assessment in Kliptown would be conducted by the municipal planning department, the City said. 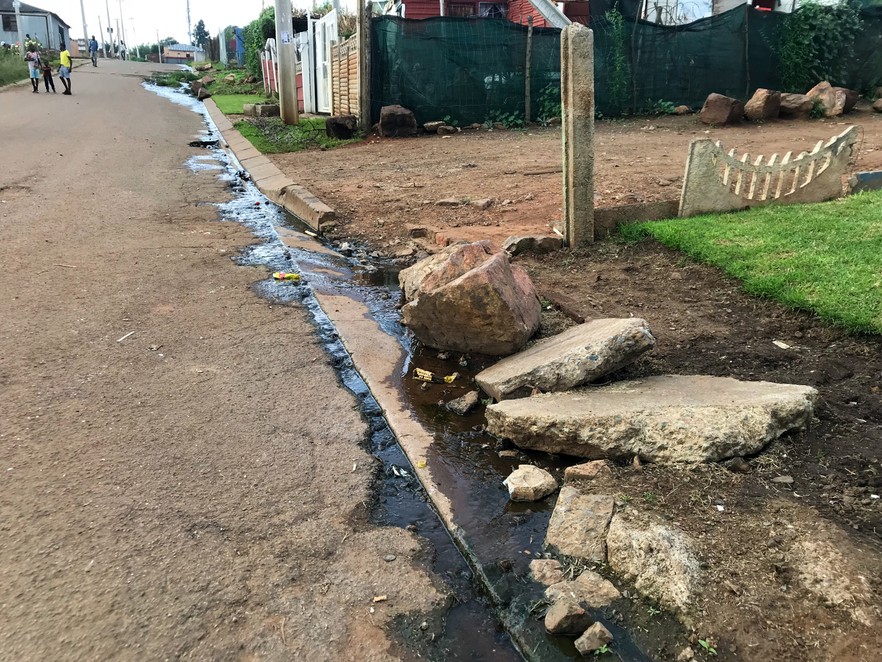 A resident who lives on this Kliptown road said this water has been flowing for almost two years and no one had attended to it.

Previous:  Telkom has frozen an employee’s pension. Here’s why a judge has allowed it

Gqeberha taxi driver dies after crashing into a protest barricade