Research and innovation, especially in a time of rapid technological changes is the lifeblood of an economy, fuelling its ability to adapt. A robust pipeline training postgraduate students who can join industry and academia is a prerequisite for an economy to be an equal partner on the global stage in the 21st century. But this pipeline is at risk in South Africa.

The goal of postgraduate student training is to equip students with the skills to conduct research, to think deeply, independently and creatively and contribute to global knowledge. It is essential that all sectors of our society are given the opportunity to develop these skills. Insufficient funding at the postgraduate level, is a major impediment to transformation. Also, the research output of South African universities, and consequently their international reputation, is dependent on the productivity of Masters and Doctoral students.

The importance of training Doctoral students has been recognized by the government, which launched the ambitious National Development Plan in 2012 and set itself the target of training 5,000 doctoral students per year by 2030. To put this into context, 1,878 doctoral students graduated from South African universities in 2012, which increased to 2,797 by 2016. The 2030 target should be met if the current trend continues. However, this will require a matched increase in the funding of postgraduate students and their research costs.

The crisis of the ever-increasing cost of university education for undergraduate students at South African universities, championed by the #FeesMustFall campaign, has been resolved for students from poor, working class families who qualify for financial need. Student activism across the country, starting in 2015 put immense pressure on universities and the government, and led to the dramatic announcement of fee-free education for students starting their first year in 2018. Financial support covering the full cost of attendance at university, has been rolled out to thousands of undergraduate students who qualify for financial need, by NSFAS. However, students who wish to progress to postgraduate studies will find that they revert to the pre-2018 situation. Most students, if they are able to attract scholarships, will only receive partial funding of their full cost of attendance.

The funding of students completing Honours, Masters and Doctorate degrees remains under-resourced with no clear solutions on the horizon. It is widely recognised that an Honours degree is an essential capping year for students who have completed bachelor degrees. However students completing an Honours degree do not qualify for NSFAS funding. This means that the academic training of many financially needy students is prematurely terminated.

Funding of Masters and Doctoral students traditionally comes from sources such as the National Research Foundation (NRF). However, these scholarships are competitive, and historically have been well below the full cost of attendance. Students have ended up working part-time to support themselves, with dire consequences for their ability to focus on their research and complete their training on time.

To make matters worse, the NRF is currently facing a budget crisis, and its allocation from the Department of Science and Technology (DST) has remained stagnant for several years. The number of NRF doctoral scholarship awarded to students at the University of Cape Town (UCT) by the NRF has halved in the last three years. 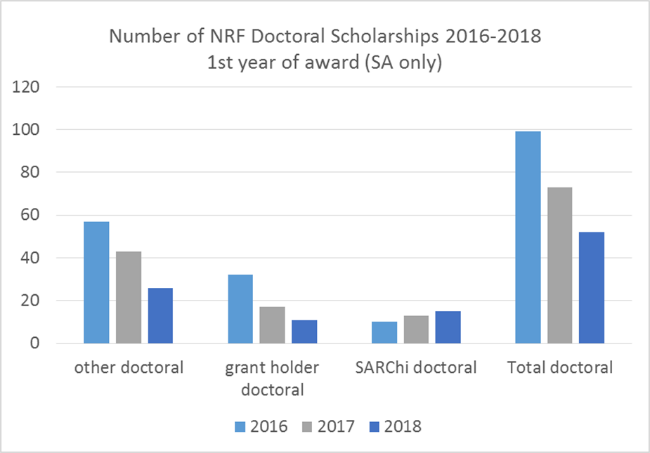 Number of doctoral scholarships awarded to students studying at UCT, broken down by different funding instruments. Other doctoral refers to Free-Standing, Innovation and Scarce-skills scholarships administered by the NRF.

In 2018, the NRF limited researchers to a single bursary per research grant leading to a further decrease in the number of bursaries available to students. NRF incentive funding, awarded to researchers based on their international academic reputation, has been another important source of student support. An analysis of the expenditure of incentive funding at UCT shows that in 2017, R3 million was awarded to postgraduate students in the form of top-up scholarships to help students cover their living expenses. In 2018, policy changes will mean that this funding stream will effectively end, further reducing the total amount of postgraduate funding available. 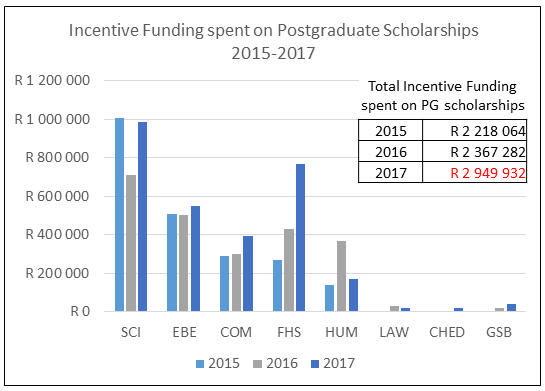 Support for postgraduate students at UCT from NRF incentive funding which prior to 2018, was awarded to rated researchers on an annual basis.

The NRF has recognised that awarding scholarships which only cover partial cost of attendance is a problem for students who lack other forms of financial support. In a major policy change, the NRF is proposing to offer full cost of attendance scholarships for Masters and Doctoral students who qualify for financial need, and meet a minimum merit threshold, as well as for top performing students irrespective of financial need.

However, the NRF estimates that it will have to double its budget to launch this plan in 2020. This is unlikely, as the NRF budget has grown less than 1% in the past 3 years. To make matters worse, funding from the Department of Higher Education and Training, which previously supported Scarce Skills Scholarships (funding for postgraduate degrees in disciplines judged to be in critically short supply) has dropped from R250 million to R100 million. This has meant that 1,500 fewer Scarce Skills Scholarships were offered this year.

While we highlight the shortfall in funding the living and tuition expenses for postgraduate students, it is important to also raise the flag of how running expenses of postgraduate research is covered by their supervisors. The NRF can no longer afford to provide annual incentive funding awards to researchers. Instead, researchers have to apply for project based funding via the Competitive Programme for Rated Researchers (CPRR). It is alarming, that the funds saved by cancelling NRF incentive funding have not been transferred to the CPRR.

South Africa needs to connect the pipeline of students emerging out of the undergraduate degree to the pipeline training highly skilled researchers and innovative thinkers. UCT has recognised the looming crisis, and funding from its general operating budget for for Honours students qualifying for financial need was increased by R10 million this year, with the aim of extending this to Masters and Doctoral students, starting in 2019. For an inherently risk-averse institution, this is a significant commitment of discretionary funding in a time of austerity. The funding will allow academically strong students from poor backgrounds to access higher degrees.. While this proposed investment is a major increase, it does not address the problem of covering the costs of research of graduate students, and is still insufficient to plug the gap left by changes in government policy.

South Africans are already paying for support for undergraduate students who qualify for financial need. This is being financed partly by an increase in VAT from 14% to 15%. The under-funding of postgraduate students is a looming crisis, and we call upon business to partner with universities and national funding bodies to find a solution.