New evidence has been brought in a court case by evicted occupiers of City of Cape Town-owned land in Makhaza, Khayelitsha. The occupiers of Island informal settlement brought an urgent application to stop the City evicting them. They lodged their court papers on 11 April. But in the past week they introduced a video to the court record — shot by the Social Justice Coalition (SJC) — which apparently shows that their shacks were occupied when they were evicted. New photos were also introduced. This caused a delay in the case which was supposed to begin on Thursday.

On Thursday about 80 protesters, mostly from Khayelitsha, but also supported by land occupiers in Kraaifontein, picketed outside the Western Cape High Court in support of the Island occupiers. 217 of the occupiers are the applicants in the case. They are represented by the Ndifuna Ukwazi Law Centre.

The City obtained an interdict in September 2017 preventing people from occupying the land which would become known as Island. In March 2018 people — mostly backyarders — moved onto the land. The City’s law enforcement then attempted to evict them three times. (GroundUp reported one of these evictions.) Each time the occupiers rebuilt their shacks. The occupiers then brought this court action. The crux of the case is whether or not the City could proceed to evict the occupiers without first obtaining an eviction order, even though the City had the interdict. In dispute is whether or not the shacks removed by the City were indeed occupied. This is why the SJC video is important to the case.

On Thursday the City’s lawyers wanted the new evidence added to the court record removed because it was introduced after the papers had initially been filed. It’s not clear whether the City wants the video removed, or some of the photos, or all of it.

After lawyers from both sides met with each other for much of the day, they then appeared before Judge Derek Wille in the afternoon. Wille ruled that the City needs to file an affidavit outlining what information it wants removed from the court record by 9 May. He set down the case to be heard on 14 June. The judge also ordered that the two sides seek mediation and try to settle the matter before the court date. 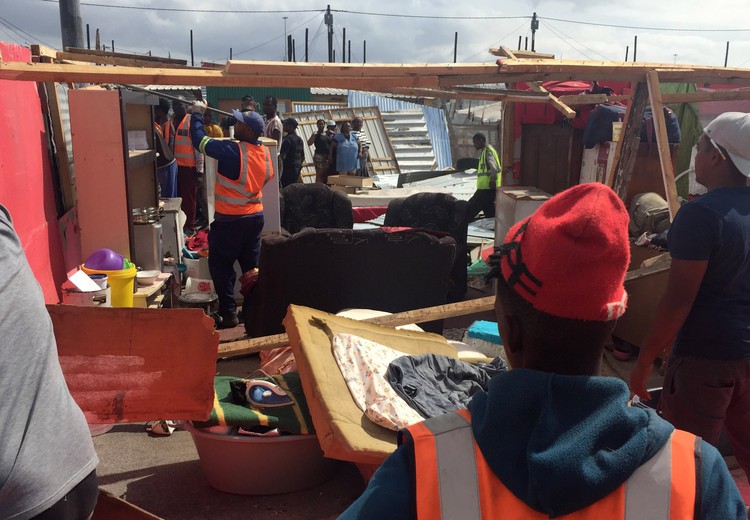 This photo taken by GroundUp’s photographer appears to show that the homes demolished on 13 March were occupied. Photo: Ashraf Hendricks

Video shot by Social Justice Coalition that has been added to the court record.

Next:  Bus driver explains why he’s on strike