Garbage piling up in spite of clean-up programme

Rubbish is piling up on the corners of streets in Nelson Mandela Bay, next to clinics, hospitals, churches, schools, initiation schools, roads, dams and storm water pipes. Yet according to the Mayor’s office, this is one of the cleanest cities in South Africa.

In July this year Mayor Mongameli Bobani allocated R40 million to fight illegal dumping and littering in the 2019-20 financial year. The municipality introduced a Clean and Green Programme and partnered with 43 cooperatives to reduce dumping.

But it seems the municipality is losing the battle.

Vukile Nqoba of Zwide township in Port Elizabeth lives next to the Dora Nginza Hospital’s boundary wall. “Everyday I pick up used nappies, papers and plastics in front of my house. Residents come with their wheelie bins and dump rubbish on this boundary wall. Some of them come in bakkies and cars.”

“They bring all sorts of rubbish including dead dogs.”

Nqoba says objecting to this illegal dumping has made him many enemies. “I tried to scare them by threatening to report them to the municipality. But they tell me that they don’t care. I have even tried to call the municipality to intervene. But they just tell me to write down the [vehicle] registration numbers.

“This has been going on for more than ten years now. I have small kids who have to endure these stinking conditions. This is a hospital, but people have no respect for that,” he said.

Nqola said the municipality collected domestic garbage once a week, “but this heap of rubbish is only removed after two or three months”. 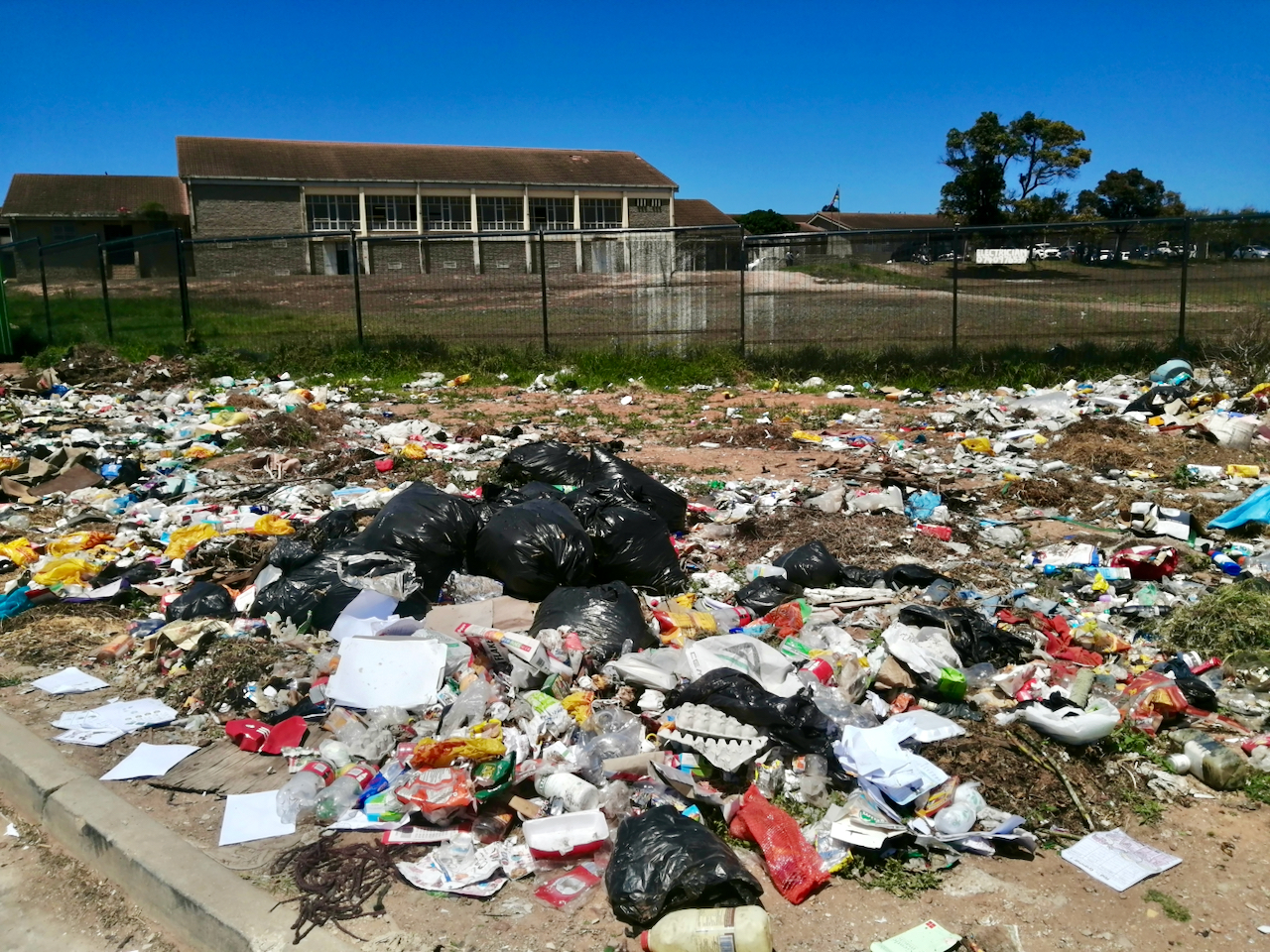 Along the Old Uitenhage Road between Govan Mbeki and Missionvale townships, rubbish is lying next to the road. Mita Arends of Missionvale said, “When Missionvale RDP houses were built in 2014, constructors dumped the rubble on this open field. We thought they were dumping the rubble temporarily while they were busy with the construction.

“But that opened an opportunity for other people to come and dump here.”

She said the workers from the cooperatives, partnering with the City, only picked up papers in the street and were not responsible for the illegal dumpsites.

Thamsanqa Lali of Soweto-on-Sea said, “It breaks my heart to see Soweto-on-Sea taxi rank filthy like this. This is a historic place because this is where most of the protests against the apartheid regime were held.”

“We do see the municipal cooperatives’ workers in our area, but their presence makes no difference.”

Mayoral spokesperson George Geleba said: “Nelson Mandela Bay continues to be considered one of the cleanest cities in South Africa. Just this year in September, Deputy Minister of Environment, Forestry and Fisheries Maggie Sotyu awarded the City as the most improved metro in the greening of cities and towns in South Africa, despite the challenges that we face with illegal dumping.”

He said the cooperatives were helping the municipality reach areas that rubbish trucks could not reach, and would also help with community awareness programmes as well as cleaning up illegal dump sites and picking up roadside litter.

Asked whether this meant extra garbage trucks would be deployed and if so when, he refused to commit himself. “We will share the implementation as it happens,” he said.

Next:  “We do not have streets, but during elections you will find big black cars driving between our shacks”