Mothers say they are not receiving child maintenance payments during lockdown

New payment system at Department of Justice is blamed by protesters 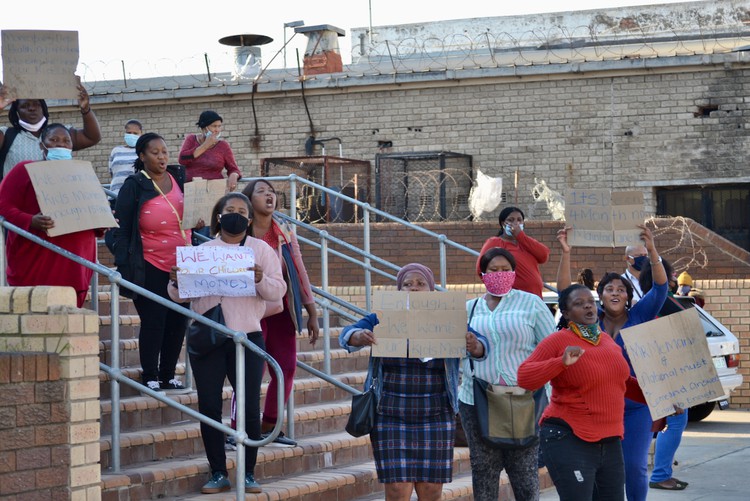 A group of women protested outside the Uitenhage Magistrate’s Court on Tuesday. They say they have not received their child maintenance payments since March. Photo: Thamsanqa Mbovane

Dozens of women protested outside the Uitenhage Magistrate’s Court on Tuesday morning. They said they had not received their child maintenance payments for the past four months, and Department of Justice officials had let them down.

The women sang Sifuna imali yekuku zethu (We want our maintenance), Silwela amalungelo ethu (We are fighting for our rights) and Sekunje nje nje ngu national (This mess has been caused by national).

They held placards with “Enough is enough”, “We want our children’s money” and “National must come and answer” written on them.

An official of the court came out to address the protesters. She told the women: “Our bank was totally closed after the 15th of March, and now payments will be done from the national office only.”

Nosipho Vazi, one of the protesters, shouted, “I have been sent from pillar to post and now it’s four months. I started enquiring about my child maintenance payment in the KwaNobuhle Magistrate’s Court in March, and I was told to wait as there was a new system of payment being introduced.”

“In April, I was told by the same court that the computers were offline, and I kept going there for a few weeks only to be told they were offline.”

“Now when I came to the Uitenhage Magistrate’s Court, I was told R3,000 that was deducted from the payslip of my child’s father has been paid out to someone they don’t know. I am owed by this court R9,000 because for three months I never got a cent.”

The official asked the protesters to write down their names in a register. The women refused.

“How many times must we keep writing our names in your papers? To hell with that,” said one woman.

The official said the new payment system was the problem and asked for patience.

National spokesperson for the Department of Justice and Correctional Service Chrispin Phiri said, “We note that the concerns around maintenance systems are ongoing and we will try our best to address those problems expeditiously. We are working on the system, assessing each and every complainant put to our system about the system.”

Next:  Two years waiting for the lights to be switched on

Previous:  Residents of Kliptown, where the Freedom Charter was signed, still don’t have decent toilets

Fikile Ntshangase opposed a mine extension. Last night she was murdered