NPO was given R4.8 million for the concert 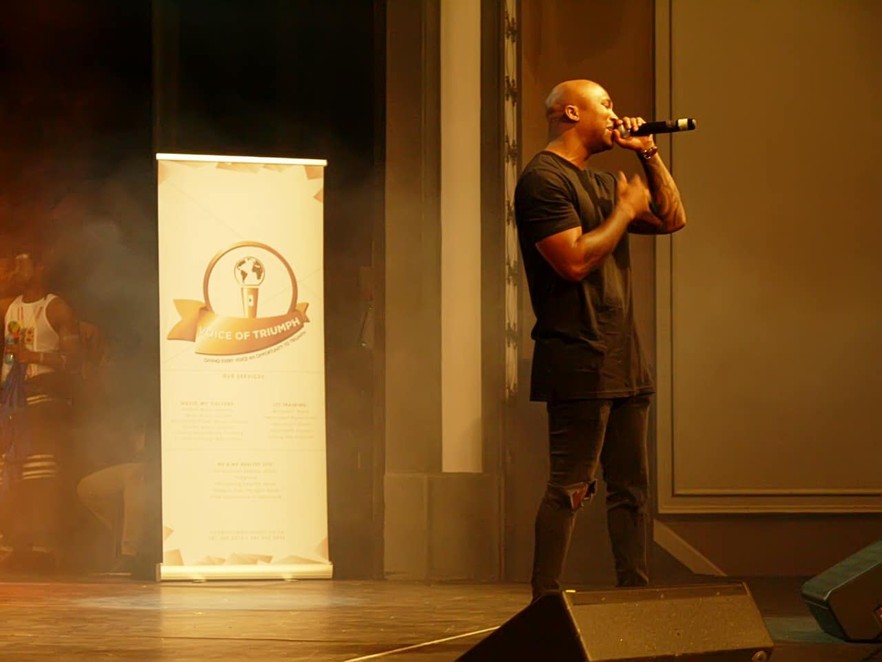 NaakMusiQ (Anga Makubalo) was one of only two professional acts at the one-night concert in 2018, billed as a “music and arts festival” and funded by the National Lotteries Commission to the tune of R4.8 million. Photo via Facebook.

The National Lotteries Commission (NLC) spent R4.8 million on a “poorly organised”, one-night concert in 2018 (billed as a “Music and Arts Festival”) together with a workshop for some of the performers.

The audience that attended the free event at the Port Elizabeth Opera House was made up largely of people associated with the Nelson Mandela Bay Municipality and local school pupils.

Participants say the 2018 event was “poorly organised”. Hopes that it would help kick-start the careers of the young artists who took part came to nothing. They were each paid R1,500 for participating.

The event was staged by a Gauteng-based, social services non-profit called Voice of Triumph (VoT).

How was the money spent?

GroundUp is aware of the following costs:

Then there were these event costs:

It is difficult to see how R4.8 million was spent on an event with the above costs.

Nosisi Mavela, a singer from New Brighton, told GroundUp, “The show was poorly organised and everything was done in a rush.”

She said she was introduced to the organisers by a municipal official, who said they were looking for an adjudicator for auditions that were held in the city hall.

Mavela said that she still doesn’t understand the purpose of the concert. “I really don’t know what the organisers were trying to achieve with this concert. There were no prizes on the day or artists being taken to further their careers. Everything just ended on stage,” she said. “It is shocking and disappointing with all the money involved.”

Mavela said she was originally hired to audition people for a choir to perform at the festival. She said the auditions lasted one day and she was paid R5,000.

The organisers also asked her to perform at the festival. “They asked me to bring my band and perform,” Mavela said. “I charged them R25,000 because we are seven members”. But, she says, she was asked “to drop the price” as they “did not have enough budget”. “I think I dropped it to R10,000 or R15,000,” she said.

Mavela said a large part of the audience on the night of the show were pupils from local township schools and transport was arranged for them from their schools to the venue.

“After we performed we were taken to one of the rooms where artists and some of the municipal officials had supper. Learners were also served food before being taken back to their schools,” she said.

Simphiwe Vikilahle, an actor from KwaZakhele township, said, “The only thing they did for us was to provide us with tea, muffins and lunch during our two-week workshop. They also gave us taxi fares.”

He said they were given a R1,000 voucher to buy “performance outfits” for the three of them. They bought them at Mr Price.

“Then after we finished performing each participant was given R1,200,” he said.

Yamkela Mgomo, an actor from Zwide township, said: “The festival raised my hopes for nothing. We were all excited thinking our dreams would come true. They also made us believe that since they were from Gauteng they were there to help us. But we did not even receive certificates for participating. Our careers have not changed. Instead, we are frustrated.”

Musician NaakMusiQ, from Gqeberha but now based in Gauteng, was the main performer on the bill. Posters promoting the show featured him and executive mayor Mongameli Bobani (since deceased).

NaakMusiQ’s manager Sifiso Tshabalala provided GroundUp with proof of payments by Voice of Triumph for his artist’s performance fee, and for travelling expenses for him and three other people.

Monde Ngonyama, the CEO of Nelson Mandela Theatre (formerly the Opera House) said the Gauteng-based non-profit Voice of Triumph (VoT) had wanted to partner with them in staging the event.

“We refused a partnership with them because they were disorganised. Their show was never meant to empower the youth, instead it was full of politicians from the municipality,” said Ngonyama.

“We also rejected their partnership because we believe in taking between five and ten people for our workshops. But they wanted to have more people, which is against our regulations. For us, when you talk about empowerment, we need a workshop that could take between two or three months.”

Siya Mapinda, the theatre’s manager, said, “They booked us for two days. 24 October was for rehearsals and 25 October for the event. The amount paid was R11,989.23.”

“I can’t say how many people attended the show because there were no ticket sales. We were also not involved because they were working closely with the municipality.”

Mapinda says they were introduced to VoT by Seki Mandaba, the municipality’s assistant director for municipal events in the City’s sports, recreation and arts department.

Role of the Mandela Bay Municipality

Mandaba says the municipality only provided “in kind” support for use of the venue for their programme. “In the end the project was a joint effort supported by the municipality and Opera House,” says Mandaba.

“Indeed, I did introduce them (VoT) to the Opera House as they were referred to me by a person that deals with various stakeholders and coordination and management of events.

“The management of their activities and procurement of all services was done by the NPO (VoT).”

Held on 25 October 2018, the concert came just weeks after Democratic Alliance mayor Athol Trollip was ousted and replaced by Bobani from the United Democratic Movement.

Bobani was featured on posters publicising the event with NaakMusiQ, helping to boost his profile as the new mayor.

There are no references to the NLC or the Lottery on VoT’s website. The only mention of the NLC being involved in the funding of the event was on VoT’s Facebook page, in a post (picture below) about two weeks after the event: “On the 25th of October, Voice Of Triumph, in partnership with NLC (@National Lottery Commission) had the opportunity to host a ‘Music & Arts Festival’, which was driven at unravelling the talent in the youths of Port Elizabeth,” the post read.

“The event took place at the Opera House, and we had an amazing performance from one of Port Elizabeth’s greatest artists, NaakMusiQ … amongst other young and upcoming artists, who showed their amazing talents excellently … in the presence of the the honourable Mayor Mr Mongameli Bobani of Nelson Mandela Bay, who endorsed the program.”

Festival not part of Voice of Triumph’s mandate

VoT, which is based in Tembisa in Gauteng, was registered as an NPO with the Department of Social Development on 28 September 2015. It is involved in “Social Services: Income support and maintenance” and “material support”, according to its DSD listing. It is unclear how a musical event fits in with that mandate. It is also unclear why a Gauteng organisation would be given millions to stage an event in another province.

VoT has also not reported to DSD since 2019, making the NPO non-compliant in its statutory reporting requirements for the past three years.

On the origin of its name, VoT says on its website: “The name ‘Voice of Triumph’ was inspired by the message of the year 2015, ministered by our dear man of God, Rev Dr Chris Oyakhilome. In this message he defined triumph as a great or important victory, notable success or achievement, Triumph also means to prevail and the successful ending of a struggle.”

Oyakhilome is a wealthy Nigerian pastor who heads up the Christ Embassy Church, which has a “thriving congregation with branches in Nigeria, South Africa, London, Canada and the United States” according to Forbes Magazine.

Joyline Josamu, a South African pastor for the Christ Embassy Church in Midrand, Gauteng, is thanked in the post “for giving us an opportunity to let other Voices be heard, and Triumph together as one.” VoT also thanked Zola Key, the owner of ZAM entertainment, who organised the concert.

Neither the municipality nor the opera house could explain the role of Pastor Josamu in the event.

The municipality’s Mandaba said, “I am unable to tell you what her link to the NPO is. She was introduced as part of Voice of Triumph team.”

The Nelson Mandela Theatre’s Siya Mapinda was equally unclear as to her role. “I honestly don’t remember her exact role but she came across as a leader of the NPO (VoT),” he said.

The NLC, Zola Key, Joyline Josamu and Nkosinathi Masinga, founder of VoT, have not responded to our detailed questions sent via email and WhatsApp since 3 August.

Next:  “We don’t want handouts. We want land”