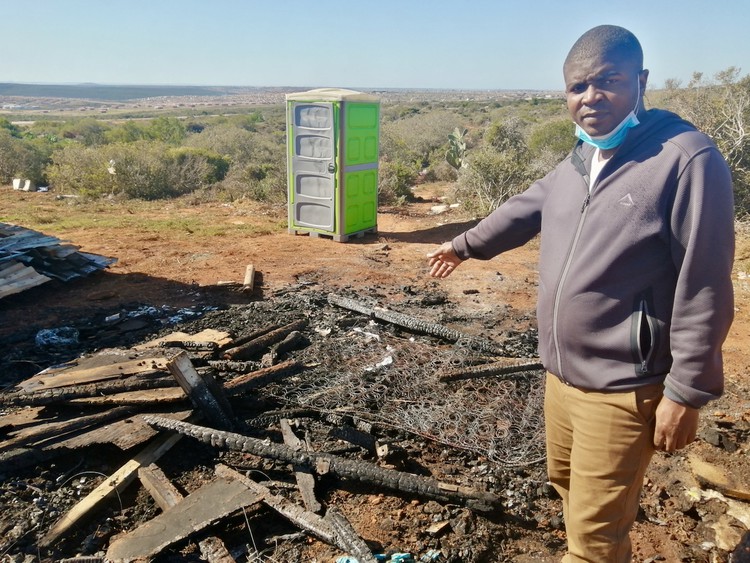 Xola Roxa, 33, died in a shack fire in Jaagvlakte, Port Elizabeth, in the early hours of Thursday.

“The last time I saw my son was during supper time when he came to fetch his plate by my sister’s house, where I sleep,” his mother, Nozizwe Roxa, told GroundUp.

“Between 12 and 1am, I heard the footsteps and barking … I woke up and went outside to look at what the dogs were barking at.”

She said she saw that her shack, where her son was sleeping, was on fire. “I screamed and called him by his name. But there was no answer.”

“The community came and tried to extinguish the fire but it was too late,” she said.

Jaagvlake has 131 households of people relocated from Vastrap informal settlement. Water is delivered by municipal tankers in the morning.

“In Vastrap the communal water tap was next to my shack. But here I had to watch my son burning because we ran out of water. He used a candle for light,” said Nozizwe.

She said she lost everything in the fire. “I am only left with the clothes I am wearing. I don’t even have material to rebuild my shack. I appeal to anyone who can help me to bury my child and rebuild my shack.”

Her neighbour, Ntombizanele Mapu, said, “We heard her screaming and came out to help. But the fire was too strong and the shack was already falling down … We tried to extinguish it with our buckets of water, but we ran out of water because we don’t have communal taps here. We had to fold our arms and watch the fire killing Xola.”

Khaya Makalima, a community leader formerly from Vastrap, blames the municipality for the death. “These are municipal serviced sites with water and sanitation. We were relocated here in February from Vastrap informal settlement. Since then we have been waiting for communal taps.”

“In March and April I had written letters to the office of Mayco [member for human settlements] Andile Lungisa asking for electricity, water and toilets. But there was no response. We only received the chemical toilets for Covid-19.”

Ward 29 Councillor Vukile Dyele (ANC) was not available on his phone.

Captain Sandra van Rensburg of SAPS said, “An inquest docket was opened. The cause of the fire is still unknown and will form part of the investigation.”

Next:  Planting veggies for the hard times ahead