Township residents clean their streets after chasing out contractor 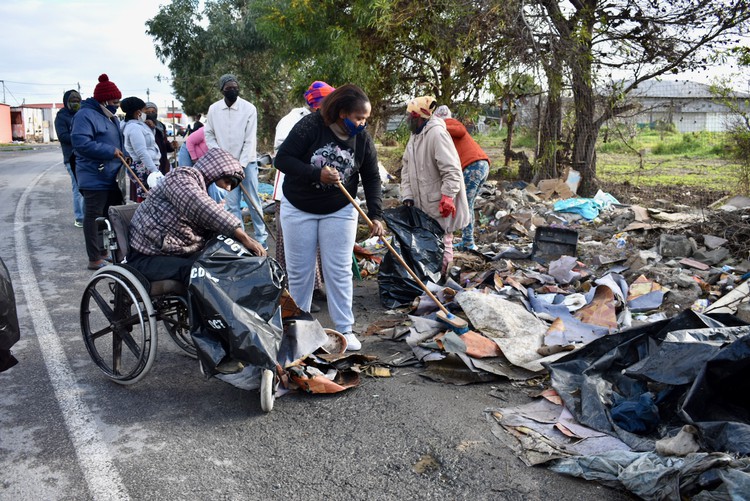 Lower Crossroads residents clean up after they drove out the street cleaning contractor. Photo: Buziwe Nocuze

“We have stopped the cleaning company because they were not doing their job,” said Nophelele Mqikela, a community leader in Lower Crossroads, Cape Town.

Mqikela said they had blocked the company since June.

On Wednesday, the community gathered to clean the streets themselves. Resident Peter Shumi said: “We were hoping that the City will come and collect the rubbish since we have already collected it.”

“People from other areas come and dump dead dogs in our area. The cleaning company would leave behind all of that. What is the use of having people cleaning our streets if they left them dirty?” said Shumi

Mqikela said: “We can’t let people continue getting paid even if they are not doing what they are supposed to do.”

She said they had laid complaints with the City of Cape Town, but the City had sided with the company.

Another community leader, Nozuko Nyhaba, said they were unhappy with the City’s hiring method. “Their database is choosing the same people over and over again,” she said.

Nyhaba said the City should consult the community when hiring cleaners and they should be residents in the area.

“We believe that if the workers were from our area we wouldn’t have the problem of streets not being cleaned properly. They don’t care, because they know they are not staying in the area,” she said.

Mayco Member for Waste Xanthea Limberg said the accusations made by the residents were false. “The company is meeting the requirements of the contract in terms of hiring local labour,” said Limberg.

She said that under the contract 50 people were hired to clean the whole Brown Farm area and not only ward 35.

She said community members were not allowed to dictate who benefits from work offered through the Expanded Public Works Programme. “Candidates are selected through a randomized process and are from within the boundaries of the local sub-council. This is to ensure fairness,” said Limberg.

She said contracts are advertised every three years and the current contractor was new.

The contractor, Masiqhame Cleaning company, could not be reached for comment at the time of publication.

Next:  Lockdown in pictures - Day 141: It’s Friday! Even though there’s no school