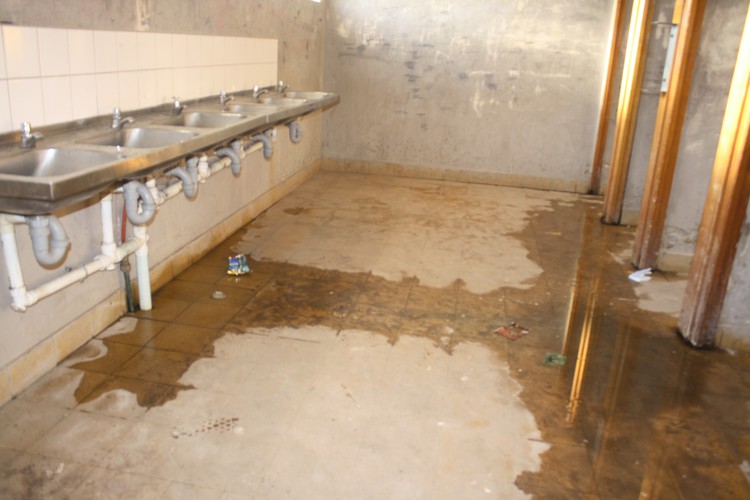 The taps in the girl’s toilets at Mthonjeni Primary School in KwaNobuhle, Kariega have been leaking water for some time due to ageing infrastructure. Photo: Thamsanqa Mbovane

Hundreds of learners in the Eastern Cape are being sent home early everyday because schools run out of water.

This comes as communities in Nelson Mandela Bay Municipality have been experiencing severe water shortages as dams run dry. The problem has been caused by a combination of low rainfall, the municipality’s failure to fix leaks or to plan for the water shortage.

School Governing Body member Noluthando Sifuba said the school’s water shortage has left the toilets in a terrible state. She said that the school’s three Jojo tanks were also empty because it has not rained consistently for three months.

“The taps are loose and pipes are ageing in the school. We are waiting for a maintenance budget to be released, but it won’t be enough as the damage is extensive,” she said.

Sifuba said learners have been asked to contribute a 2-litre bottle of water which is used to cook the meals they get at school. “Most children attend school without eating breakfast at home. Our taps are very slow and don’t operate smoothly,” she said.

At Noninzi Luzipho Primary, SGB chairperson Aletta April said that all learners are sent home if they arrive at school and the taps are dry.

At Mthonjeni Primary, the girls’ toilet taps are loose and leaking onto the floor. A teacher, who did not want to be named said, “We owe the municipality over R100,000 for water, electricity and sewage but we get only about R47,000 per year from the department for municipal services.”

Last month, the Nelson Mandela Bay Business Chamber promised to adopt over 30 schools to assist with water saving measures. “We will adopt the schools with the help of member companies, to repair damaged or faulty infrastructure at some of the metro schools … that have been identified as high water consumers,” said acting CEO Prince Matonsi.

Education department spokesperson Malibongwe Mtima said that 15% of the province’s budget goes to maintenance. “Some schools complain to us about overgrown grass or broken windows, while we give them a maintenance budget annually to use for electricity, water and sewage. We urge schools to use the budget as it does not roll over to another financial year.”

Previous:  Imbali brought to standstill by fury over electricity cut