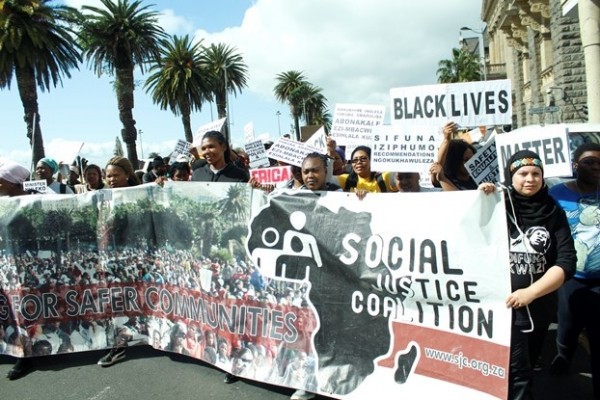 The Social Justice Coalition was at the forefront of campaigns for better policing and sanitation in Cape Town’s townships. Archive photo from 2015: Masixole Feni

The Social Justice Coalition (SJC), once one of South Africa’s foremost social movements, is riddled with unexplained spending by the organisation’s top employee, its general manager Xolani Klaas.

Bank statements analysed by GroundUp suggest that Klaas has been using the organisation’s money to fund personal expenditure. Instead of explaining the transactions, Klaas responded to our questions by threatening legal action.

Luxury items, huge amounts on personal grocery shopping, over R60,000 in cash withdrawals, are among the purchases made using the SJC’s bank card that is in Klaas’s possession.

GroundUp understands that one of the SJC’s major funders, the Norwegian People’s Aid, is currently conducting an investigation into the misappropriation of funds, and has provisionally suspended any further disbursements.

The SJC was the main activist organisation involved in the commission of inquiry into policing in Khayelitsha. It has been at the forefront of campaigns for better sanitation in Cape Town’s townships. GroundUp has extensively reported the SJC’s work over the past decade but we have noticed that the organisation has become much less active the past few years.

Earlier this year, GroundUp was approached by former SJC employees who were worried about the direction that the organisation had taken, particularly since the beginning of 2021.

A number of allegations were levied against the recent leaders of the organisation, in particular against Klaas, who has been the organisation’s leader since the departure of Director Mandisa Dyantyi in September 2021.

We put these allegations to Klaas and received an 11-page response from him. Klaas denied the claims, saying that he has been a steadying hand after years of infighting and instability left the organisation in a precarious position. He suggested to GroundUp that the accusations that have been levelled against him come from embittered ex-leaders that wish to attract funders to their own causes.

But bank statements received by GroundUp raise serious concerns about how Klaas has run the organisation.

Who is Xolani Klaas?

Klaas joined the SJC in late 2019, in the newly-created finance and governance manager role.

In 2021 he was promoted to the role of general manager, which was also a newly-created role. After the October 2021 departure of the SJC’s director, Mandisa Dyantyi, Klaas remained as the most senior employee.

What the bank statements show

Now, GroundUp can reveal that a year’s worth of bank statements have been leaked to us which reveal peculiar transactions.

Between February 2021 and January 2022, the SJC bank card used by Klaas has been used for too many questionable purchases to describe in full.

(While the SJC has two bank cards, the bank statements indicate which bank cards are responsible for each transaction. Klaas’s card has a distinct number, and we have confirmed that the transactions below were from that card.)

R60,000 has been paid to a KZN-based company called Jicks Investments in three tranches.

Throughout the year, we noted a number of payments to “consultants” and for reimbursements, with no further details available.

Last June, the SJC spent R27,000 in office renovations. The SJC changed offices but remained at the same location – the Isivivana building in Khayelitsha.

This makes the furniture and appliance purchases later in the year confusing.

GroundUp has confirmed that no new furniture is visible at the SJC offices since June 2021.

We noted the following transactions:

Klaas appears to have been using the SJC’s funds to buy clothing and jewellery.

Klaas has been travelling extensively around the country. He and the small remaining staff contingent constantly use hired cars and Ubers. R65,000 was spent on flights in the year under review.

According to Klaas this is “to carry out the important work that we do in communities”.

But, until February, when it was stolen in a hijacking, the organisation “owned” its own minibus. (Klaas told GroundUp that they subsequently bought another car.)

Nevertheless, GroundUp can reveal that the SJC spent

It is unusual that an organisation that was inactive for much of December 2021 would be Ubering around in the days before Christmas.

In total, the SJC, using Klaas’s card, spent R52,739 on AirBnBs in the period. This includes accommodation over the new year. For instance, on 27 December, the card was used for an AirBnB rental worth R4,033.

R175,204 was spent on food over the year, including many purchases near Klaas’s home in Sitari.

Inexplicable items include R2,178 spent at Woolworths in Sitari and R2,100 at Sanbury Square Pick ‘n Pay, near Klaas’s home on 30 December. R19,000 was spent at this Pick ‘n Pay between August 2021 and end-January.

Between February 2021 and January 2022, R63,000 was withdrawn as cash, including cashbacks at supermarket tills.

But SJC has a history with the use of cash that raises serious questions for Klaas.

In 2016, a small group of staff members were discovered to have been embezzling funds by manipulating the cash payment system. Over R200,000 was stolen. Charges were not laid as the employees were fired. (This group would later cause an internal crisis as they tried to get a candidate that was sympathetic to their cause elected as Deputy General Secretary in 2017.)

After this fiasco, cash payments were stopped, except in extraordinary circumstances, and then subject to close oversight and regulation. This policy held even for massed events; suppliers (such as food and transport) had to be secured and paid electronically before the event.

The SJC’s previous finance policy demanded that “No programmatic expense can be paid through cash as there is no cash advance system.”

Now the SJC’s finance policy states that, “Where necessary, taking into account where SJC operates, some programmatic expenses may be paid by cash where vendors only prefer cash as a method of payment. This must be approved first by the General Manager or Director.”

In 2014, a finance officer at the SJC was caught using a salary advance scheme to defraud the organisation. She was fired. After this, all salary advances were stopped.

Under Klaas, salary advances have returned. In total, R113,800 in salary advances were paid between February 2021 and January 2022, that GroundUp can confirm through analysis of bank statements.

In a response to GroundUp, Klaas defended this system, saying that it was for compassionate reasons.

The bank statements do not indicate that these advances were repaid, but it is possible that the repayments were taken off salaries, which are paid from the account as a whole.

The stolen minibus was not even in the name of the SJC as an organisation.

Klaas confirmed that he registered the minibus in his own name. He said that he did this because “we had problems with the NaTIS system”.

The vehicle was fixed and upgraded, including getting a new sound system, all paid for by the SJC. The vehicle was not registered to the SJC’s insurance, which is Outsurance.

From the bank statements, we can see that R19,000 was paid to Motor Happy, a car insurance company, in March 2021.

Klaas said that the insurance claim against the minibus was processed and paid out.

Current and former members of the interim board confirmed to GroundUp that they have not performed any oversight over finances during the last two years, during which time Klaas has been in a managerial position. They said that their mandate was limited to creating a new governance structure, and did not include examining how funds were being spent.

The most recent annual report, from before Klaas’s time at the top, indicated that the organisation had an accumulated surplus of R3.6-million. It is unclear what the status of this surplus is now.

We asked Dyantyi questions twice, the second time with specific ones about the bank statements. Both times she refused to answer and referred us to Klaas.

“I will not legitimise the illegal breach of our confidential information by responding directly to your questions.

The SJC is not accountable to GroundUp. We are accountable to our Funders whom since the dawn of these allegations, we are co-operating with as they conduct their own investigations.

You have illegally obtained our financial information and drawn conclusions which will fortunately be disputed by facts. You have in the process exposed my personal safety as you allude to my personal residential address. In the appropriate legal forum, you will have to explain the illegal breach of our confidential information as well as obtaining my personal address.

I would like to categorically state that this will be the last engagement from my side on these matters and I will not engage you any further. We will most definitely engage in another legal forum regarding the conduct of GroundUp. “

Next:  Wealthy Durban businessman fails to keep R5.5-million out of reach of his estranged wife

Previous:  Video: How an organisation is giving Cape Flats children balls not guns