“If they build their shacks on these sites, what will happen to their culture?” 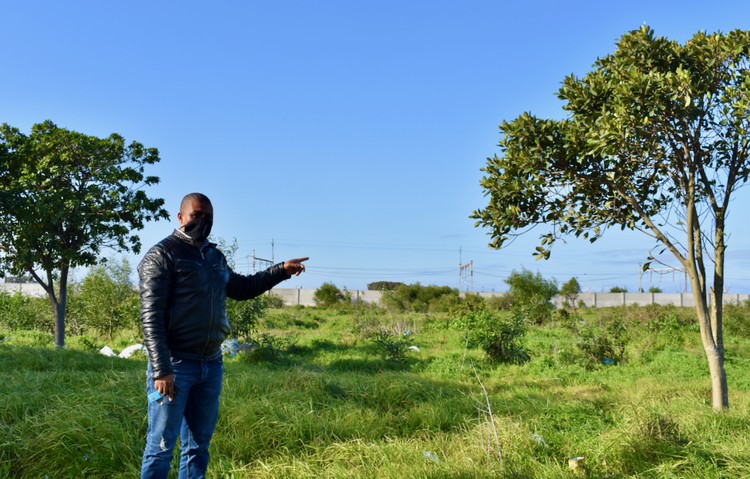 Sikelela Zokufa standing at one of the initiation sites near the Nyanga Junction mall in Cape Town. Photo: Buziwe Nocuze

Traditional initiation schools are finding themselves having to compete for space as land occupations grow in Cape Town.

“Land invaders are telling the people who were born in Cape Town to go perform their tradition in Eastern Cape,” says Sikelela Zokufa, founder of the Somagwaza Institute, which focuses on the preservation of traditional initiation, including protecting and securing heritage sites.

Last weekend, men from Gugulethu, Langa, and Nyanga met and decided they would protect circumcision school sites against land occupations.

Zokufa said he understood people wanted places to live, “but they should do it in the right way without hurting anyone in the process”.

Andile Siyolo, of the Gugulethu Initiation Forum, said they had already lost sites in Barcelona, Marikana and other places. “Every time there are these illegal land invasions we lose our sites. We can’t let this happen now or else we must forget about performing this culture here,” he said.

Chief Lungelo Nokwaza said occupiers should refrain from taking initiation sites. “What they are doing is irresponsible … They must remember the importance of culture every time they invade these areas.”

“One day they will get houses. Where are they going to perform their kids’ culture [then]?” he asked.

Ward 42 Councillor Sonwabo Ngxumza (ANC) said, “As a Sub-Council we will be having a meeting with Somagwaza Institute and all men to talk about the way forward. We will ask the City to put a sign for everyone to see that they can’t build there because the site is for initiation only.”

“Black people need to ask themselves if they build their shacks on these sites, what will happen to their culture. Is taking the site worth it or they are taking it for the sake of taking every piece of land?” said Ngxumza.

What is the state of South Africa’s health system? Four easy pieces