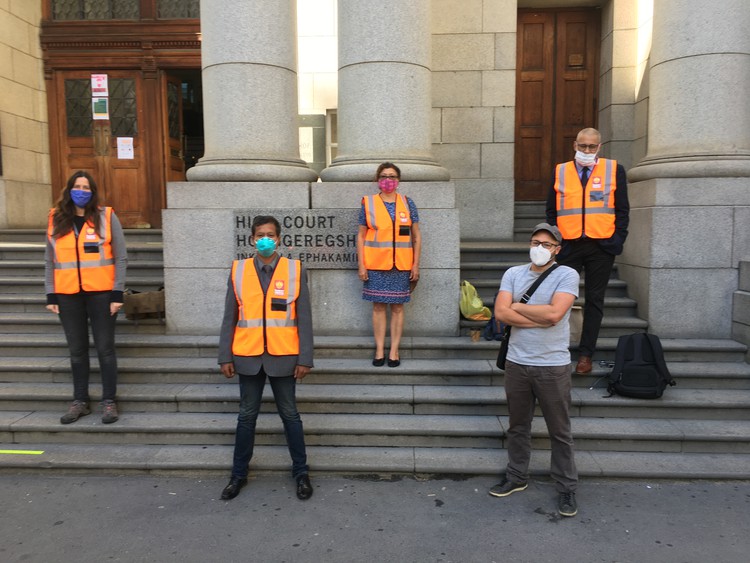 Some of the SA Human Rights Commission monitors outside the Western Cape High Court in May. Photo: James Stent

Judgment in the case between the City of Cape Town and the South African Human Rights Commission (SAHRC), and ten others in the Western Cape High Court has been reserved by Justice Siraj Desai until after 15 June. This is pending submissions from counsel for the SAHRC and Dr Gilles Van Cutsem of Médecins Sans Frontières (MSF) due on 14 June, and the City’s reply to these submissions, due on 15 June.

The case centres on the interdict granted to the City against the SAHRC, its Commissioner and CEO, and people appointed by the SAHRC to act as human rights monitors, which included Dr Van Cutsem of MSF. The interdict prevented all except SAHRC commissioner Chris Nissen from going to the Strandfontein camp for homeless people.

The City said the SAHRC and its monitors had disrupted the camp, spread “misinformation and lies” in public and breached lockdown regulations.

The Chapter 9 institutions, of which the SAHRC is one, are specifically mentioned in the lockdown regulations as being essential services.

The City said it would not proceed with the interdict because the Strandfontein camp had closed in the meantime, but the question of legal costs still had to be settled. The City wanted each party to settle its own costs but the respondents wanted the City to pay.

The case had been postponed by Judge Desai on two occasions, 14 May and 20 May. The camp closed on 21 May.

The City, represented by advocates Renata Williams and Mushahida Adhikari, argued that the City had no choice but to seek an interdict against the SAHRC and the others, and that in any case Nissen could still visit the site in spite of the interdict.

The SAHRC and nine of the ten respondents, represented by advocates Norman Arendse and Sheldon Magardie and instructed by the Legal Resources Centre (LRC), replied that the City’s interdict was an unprecedented attack on the constitutionally-guaranteed monitoring powers of the SAHRC. They said the City’s interdict was an attempt to avoid accountability and was irrational, as it named people who had never visited the site, such as the Gauteng-based CEO of the SAHRC.

Counsel for Van Cutsem asked the City to retract statements made against his client, which they had repeated during the hearing, arguing that the City had attacked Van Cutsem’s professional standing. The City declined to retract the statements.

In a statement on Wednesday, Executive Mayor Dan Plato said, “While we value and respect the important role played by Chapter 9 institutions, we also have a responsibility to protect staff and NGO partners from abuse and harassment, as was the case with the misconduct of the monitors appointed by the SAHRC.”

The City further said that when its attempts to engage the Commissioner failed, it was obligated to approach the court for relief. “Interim relief was granted to the City in May 2020, preventing the monitors from continuing with their unlawful conduct at the shelter. This was necessary and never intended to interfere with the legislation governing the SAHRC,” it said.

Previous:  Covid-19: “We are facing a humanitarian crisis like never before” warns Breadline Africa