Eastern Cape villagers will have to wait 21 years for water, says municipality

OR Tambo Municipality says it will cost R10 billion 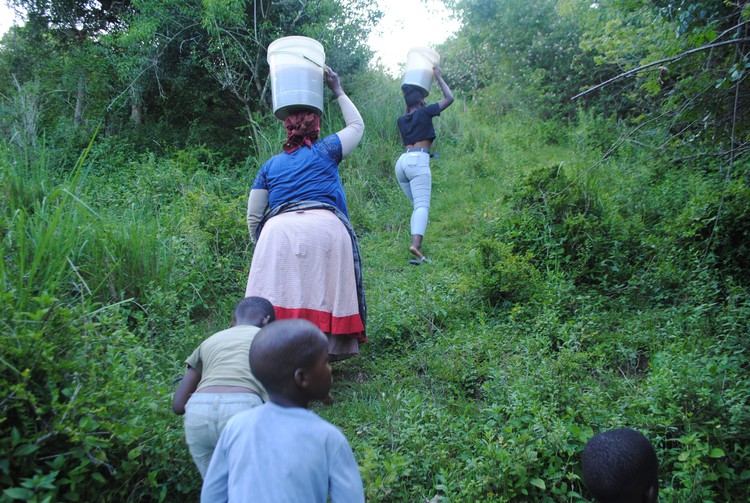 Nozinzile Mveni and Nonjabulo Mbalela carry buckets of water up a steep hill back to their Port St Johns village every day. Photos: Mkhuseli Sizani

It will take at least two decades and nearly R10 billion to fix the water and sanitation woes plaguing villages in the OR Tambo District Municipality in the Eastern Cape. This is according to Zimkhitha Macingwane, spokesperson for the municipality.

Last week, GroundUp reported that villagers in the King Sabata Dalindyebo municipality, also under OR Tambo District, have been walking at least a kilometre to fetch dirty water from a spring which they share with livestock. The municipality was among several in the OR Tambo District where more than 140 water operators have not been paid. The Commission for Conciliation Mediation and Arbitration awarded R1.5 million to the workers.

This week, Macingwane blamed “political instability” and “the impact of Covid-19” for the municipality’s failure to provide adequate water supply to communities.

She said that 87% of an estimated 1.5m people live in small rural villages or scattered settlements. “The District has analysed the resources available within its jurisdiction. In order to achieve universal access for water it will take about 21 years,” she said.

Macingwane said 374 water tankers are being deployed to affected communities. She said there are about 37,203 households already connected to water. “Sanitation backlog is about 96,000 households that don’t have a basic level of service.” Macingwane said the municipality’s current rate for water connections is 3,000 connections per annum.

Meanwhile, Nozinzile Mveni from Port St Johns hikes up and down a steep hill to collect buckets of water from a spring every day. “We walk through tall grass and thick bushes. Dangerous snakes are common during this time of the year because it is very hot. But we have no choice because we don’t have another source of water,” she said.

Her husband Xhwele Mveni said: “I was born and bred here but our water situation does not change. About seven years ago we sent a delegation with bottles of dirty water to the municipal offices. We asked the officials to drink the water. But they couldn’t drink it. They promised to give us the jojo tanks that would be filled by water tankers.”

Jojo tanks were only delivered after the outbreak of Covid-19 last year, he said.

“Villagers physically fought for the water because it was never enough. The municipality only filled the tanks three times and never again,” said Mveni.

He said in addition to their water problems, they have also complained that the pit toilets they use are never cleaned by the council. “Many people dig holes and shift the toilet into a new hole.” 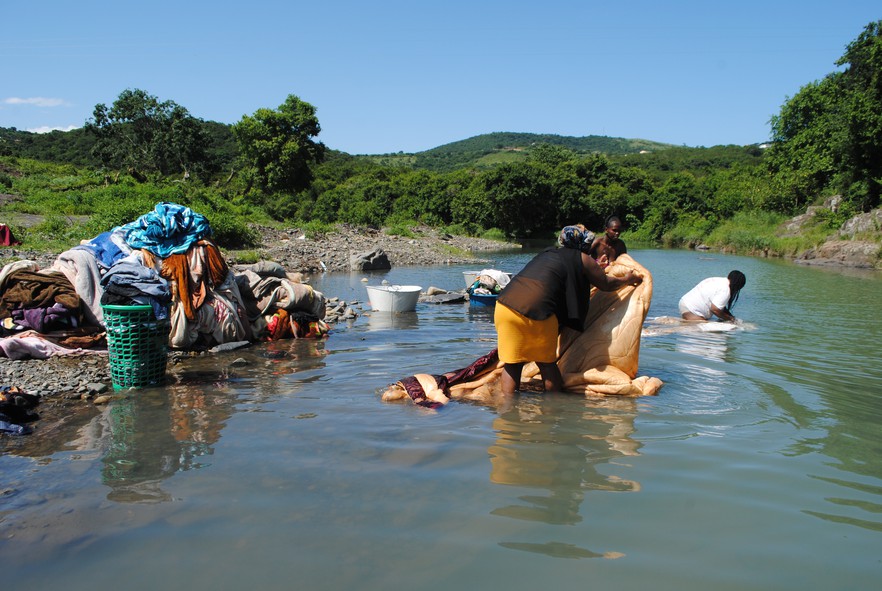 Women in Kwantsila village visit this river daily to do laundry, bathe and collect water to cook. Their taps have been dry for a month now.

In Kwantsila, residents were afraid to speak openly about their struggles to access water because they are scared the municipality will sideline them for future job opportunities.

One of the women GroundUp met while doing her laundry at the nearby river identified herself as Nosisa. She said their taps have been dry for a month. “We are a family of 20 people, including school children. We come to the river at about 5am and fetch water with our 20 litre buckets. But the water is not clean. Some of the people do laundry, some bath themselves, while others fetch water to drink,” she said.

Macingwane did not answer some of our questions regarding the challenges raised by villagers.

Next:  Meet the woman at the centre of Port Nolloth’s crayfish trade

Previous:  We should not let people suffer and die alone in hospital