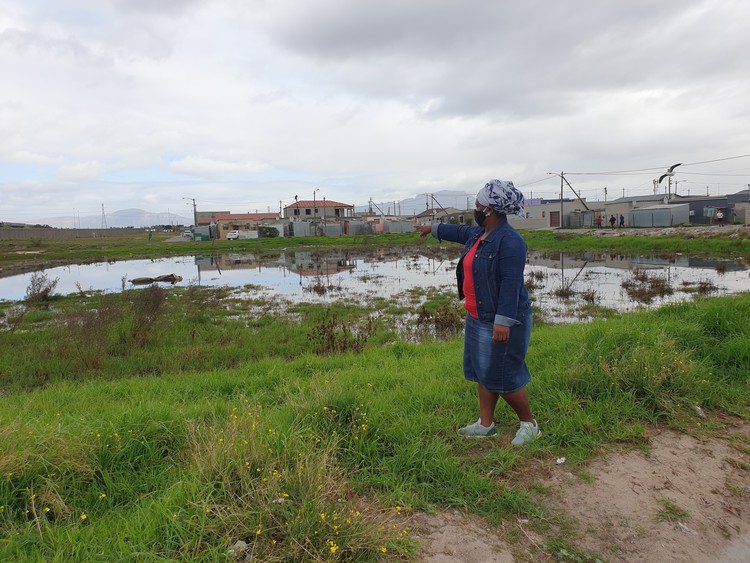 Resident of Island in Philippi, Yandiswa Mpopoma, points out the stagnant body of water that has caused mosquitoes and flies to proliferate for months. Photo: Mary-Anne Gontsana

Residents of Island in Philippi, Cape Town, say a foul smell, blocked drains, mosquitoes and sewage on their driveways has become part of their daily lives. A body of stagnant water caused by a damaged pipeline has been dubbed by residents as “the toilet”.

Residents say the grey body of water on vacant land in Ntabesinayi Road has been there for more than three months.

Island committee member, Yandiswa Mpopoma said: “We are suffering and our children are suffering. If we are not being constantly bitten by mosquitoes, we are getting strange rashes.”

Mpopoma said the first time they reported the spill to authorities, they were initially told it was caused by heavy downpours. “Every time we have blocked drains the water comes straight to this field and it just stays there. It doesn’t sink or flow anywhere else. We need a permanent solution for this field because we are not coping anymore. This thing is disgusting. This used to be such a beautiful, clean piece of land where children used to play soccer,” said Mpopoma.

Mpopoma’s elderly mother, Rebecca, lives next to the vacant land. “I am constantly fighting mosquitoes, I can hardly sleep at night because of them. I am not even going to get started about the smell,” she said.

Rebecca showed GroundUp the flush toilet in her yard. When she opened the door, a number of mosquitoes flew out while many more remained, covering the walls of the toilet stall.

Makhosi and Esther Mhlawli also live opposite the field with their four children. Makhosi said that about two weeks ago, he and a few other men in the area opened and cleaned one of the blocked drains themselves.

“It was the worst thing ever but it had to be done, even though the relief was short lived. Cleaning that drain came with consequences though because I ended up with a nasty rash,” he said.

Esther said that she burnt dirt weekly “as a way to minimise or get rid of the mosquitoes because it is like a plague here”.

Mpopoma said the Island committee had reported the problem to the City of Cape Town months ago but did not get any feedback.

On 2 May, committee member Yandisa Mnqanqeni, tweeted about this issue. He received a response and reference number for his complaint on 9 May. But on Wednesday, 13 May when GroundUp visited the area, nothing had been done yet.

The City’s Mayco Member for Water and Waste, Xanthea Limberg, blamed a private company currently building at the nearby Watergate Mall for damaging a pipeline that was causing the body of water.

She said the City’s water and sanitation department had been on site daily for repair work since it discovered the main sewer pipeline at Watergate in Mitchells Plain was damaged a few days into the national lockdown.

“It seems as if a private company currently building a new CTM behind Watergate Mall damaged the City’s pipeline with a digger loader while attempting to illegally connect their private services to municipal infrastructure. The City has tried repeatedly to contact this company but unfortunately, their office telephone numbers are not being answered. The developer will be held liable for repairs,” said Limberg.

She said the City has appointed a contractor to overpump and conduct remedial work. “The contractor completed that repair but found that there were several further damages to the pipeline. The contractor is currently still on site, excavating and overpumping day and night to repair the pipeline. It is a challenging operation due to the pipeline being 4.5m deep, and in a natural stormwater channel. The City has two six-inch pumps on site pumping continuously,” said Limberg.

According to Limberg, the contractor hopes to complete work by next week.

Next:  Alarm over proposed changes to Meat Safety Act