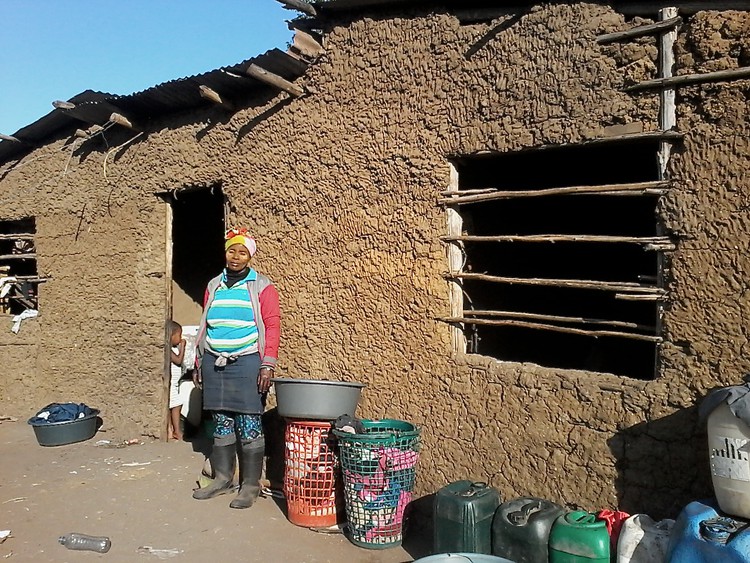 Nobuhle Mkhize lives with her five daughters and six grandchildren in a three-roomed mud house she built. Photo: Nokulunga Majola

Nobuhle Mkhize lives with her five daughters and six grandchildren, aged between two and nine, in a mud house in Inverugie. A sugarcane growing area, located outside the small town of Umzinto on the south coast of KwaZulu-Natal, it is home to around 400 people.

She cuts sugar cane in the fields with her 28-year old daughter and earns about R1,000 a month.

“I work on a contract basis and sometimes we earn less money but it is better than nothing,” she says.

“I cannot afford much but with the little that I get, I try to make a good home for my children. I know it is not much but at least they have a roof over their heads,” she says.

“My two daughters are still in school and they pay R300 each for transport a month. We also pay R120 for each of my three grandchildren. Schools are not close, so we are forced to send them to schools where we have to pay for transport. I still owe the driver R1,200, but he is a nice man and he knows I will pay him when I have the money,” says Mkhize.

“I don’t want my daughters to end up like me. I don’t like seeing my elder daughter working the same job as me because there is no future in it. It is very painful to see my family suffer like this in front of me. I wonder what will happen to them when I die. I don’t want to leave them in this shameful situation. It is so difficult to survive like this but I will do whatever it takes for my family not to go to bed on an empty stomach,” she says.

Sne Mkhize, her 23-year-old daughter, says: “My mother has been working in the sugarcane field all her life. I remember when I was in Grade 1 and used to see her going to work and wonder how she does it. This is the only job she knows and we all have come to terms that this is our lives. It is hard when she has no one to help her.”

“When we have little food in the house, she [her mom] makes sure that we all eat and she will say she is not hungry, but we know she just says that so we don’t feel bad. She works hard for us and someday, I wish I can make her happy,” says Sne.

With the help from her children, Mkhize built their three-roomed mud house from foundation to roof.

“We went to the forest to get wood and started building. With the little money I had I managed to buy nails and we used an old iron roof that we had previously, since we cannot afford a new one. I also asked people to give me their old building materials,” says Mkhize.

The biggest difficulty in building the house she says was getting enough water to mix the mud. The whole area has severe water shortages.

“It is a roof over our heads regardless of what it is made out of,” she says.

The house is sparsely furnished and the floor is not yet plastered. Since she cannot afford to buy glass for the windows, she uses wooden sticks to secure the windows, and uses a 20-litre water container to make it harder for anyone to push open the front door.

Life has not been easy since she lost her husband in 2006.

“The old house that we had when my husband was alive was dilapidated. So I had to build the one we are living in now,” she says.

Next:  How Western Cape will check for a future Covid-19 surge

Previous:  Violence in prisons is increasing. The prisons watchdog needs more power to stop it